Will 2019 be the year of peace and progress in North Korea?

Will 2019 be the year of peace and progress in North Korea? 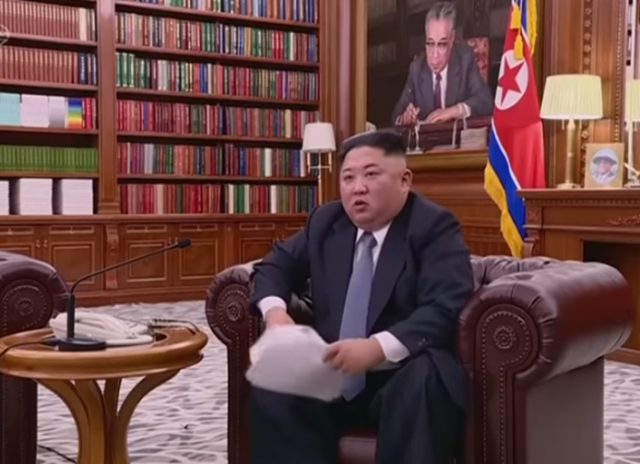 Last New Year’s, I made the following prediction:

2. North Korea’s leader will be Kim Jong Gone: The rogue nation will be brought to heel, and “Rocket Man” will be launched for a more rational leader.

I will argue I was correct. After 2018’s Singapore Summit with President Donald Trump, Chairman Kim Jong Un ver. 2 was installed, and the clearly more rational leader gave a New Year’s address in a Western-style suit instead of Maoist attire.

Kim Jong Un’s New Year’s address is a signal that North Korea’s transition to a “normal country” is on track despite a lack of rapid progress in denuclearisation. The international community needs to keep engaging Pyongyang in order to encourage positive reform.

…The overall image of North Korea that emerges from the speech is a country focused on economic development and modernisation. Mr Kim spent the bulk of this speech highlighting achievements and areas for improvement in the economy and society. At the start of the speech, he made clear the country has been on an all-out campaign for economic development since making the shift last April away from the “byungjin” policy of simultaneous progress in economic and military spheres. When he then briefly touched on the importance of military strength, Mr Kim took care to add that the defence industry’s goal was to support the economy.

While Kim’s address included conditions for further talks with the US, Seoul welcomed the speech as a sign of the North Korean leader’s willingness to improve inter-Korean relations and achieve denuclearization.

…“I am ready to sit face to face with the US president again at any time going forward, and will make efforts to produce an outcome the international community would welcome,” he said in an apparent response to a series of conciliatory gestures from the US.

Conservative pundit Don Surber noted that the way Kim’s address was described by American media is arguably the first #FakeNews story of 2019.

…American journalists asked themselves, how can this be spun to make President Trump look bad?

To illustrate the report, CNN used a file photo of him in his gray dictator garb rather than the business attire he actually wore in his speech.

Surber offered other examples of the biased, anti-Trump coverage of an important international development. It’s a good thing we bloggers are still doing the work the American press won’t do.

Further news that our journalists won’t cover is that South Korea’s military is planning a speedy implementation of Joint Security Area accord with North Korea.

Unarmed border guards of the two Koreas will be able to walk across the Military Demarcation Line (MDL) starting as early as this month, as the South’s defense authorities will step up efforts for the early implementation of a recent inter-Korean military accord on reducing tensions, a government official said Tuesday.

…The two Koreas and the United Nations Command agreed in principle to allow their security guards to move “freely” across the MDL. But they have yet to sign a joint document on new guidelines on relevant operations, including a surveillance system.

The official said South Korea’s military is pushing for another round of consultations on the issue this month.

If a compromise is made, the envisioned measure can be implemented immediately, he added on the condition of anonymity.

In response to the message and the continuing partnership between the two Koreas, Trump has a message for Kim, the press and the American people.

“Kim Jong Un says North Korea will not make or test nuclear weapons, or give them to others – & he is ready to meet President Trump anytime.” PBS News Hour. I also look forward to meeting with Chairman Kim who realizes so well that North Korea possesses great economic potential!

I look forward to covering more progress in 2019, as our press will likely continue to sweep any good news for President Trump under the rug.

Are you referring to yourself? Just out of curiosity, is your real name Romney?

Naw, Rags is clearly not as smart as Romney, and Trump is clearly much smarter than both of them.

I’ll bite. What is so nuts?

The anti-American prog “Ragspierre” has been calling Leslie names and harassing her articles for 2 years, because she supports “the most effective conservative president in 50 years”*.

The Democrats will do everything they can to block Trump’s trade initiatives while they run their impeachment. The Republicans will not lift a hand to in support.

And it is because both the GOPe and Dems are twins, both beholden to the US Chamber of Commerce. They are Globalists and Trump breaking up the trade cabal is costing the bankers trillions. That is why they are trying to destroy him.

There has been peace, or at least a ceasefire. There has been progress or monotonic change. Hopefully, 2019 will celebrate its end, and the beginning of something viable.

Leslie and Professor: Fui, I was using my iPad to read your site just now, and every link calls up ionis dot com. Headlines, read more, comments, anything that I push/click — all get the same page. iPhone is OK.

I’ll believe that non-aggression pact with S. Korea when I see that all of that artillery has been melted down into plowshares or Kias.

I’d love for it to be true, but I’m afraid this is just more of the rope-a-dope strategy the Norks have been employing for decades. The Pakistanis did it first and laid down the framework. The Norks and Iranians are following suit. They just game our system by playing our political parties against each other, waiting out one administration and then extorting the next, and on down the line.

That’s one reason the sanctions have not been relaxed, and won’t be until NoKo denuclearizes

To be honest, South Korea is salivating at the prospect of a North Korea being open to their goods. They have an instant market for their exports and lifts their economy tremendously.

The fact that he isn’t dressed like Dr. Evil is a good indicator that change is in the air.

2. North Korea’s leader will be Kim Jong Gone: The rogue nation will be brought to heel, and “Rocket Man” will be launched for a more rational leader.

I will argue I was correct.
————————
And you would be wrong. His attitude might seem different, but he’s still the same guy who was in charge last year.

Keeping in mind regime change was NEVER on the cards for North Korea.

I think even Uncle Kim understands the potential pot of gold he is sitting on if he opens the North up to consumerism from the West! He isn’t an idiot (unlike Democrats and the loony left in general).

Its going to be glorious watching the left melt down as, slowly but surely, North and South head towards REAL peace and open borders (as in, no borders within the ONE country!).

And when that happens and Trump is awarded the Nobel Peace Prize for actually delivering peace the melt down of the left will almost be complete (to be completed with his 2nd Presidential term). Hahahahhahahaa.

There is no movement from North Korea, just the same lying, delay and obfuscation they’ve been doing for decades. There will be no progress unless,or until the US tells Kim that he will end his nuclear weapons and missile programs, or they will be ended without his participation — and makes him believe it.