Dems changing the confirmation rules “has come back to bite ‘ em. I predicted it would.” 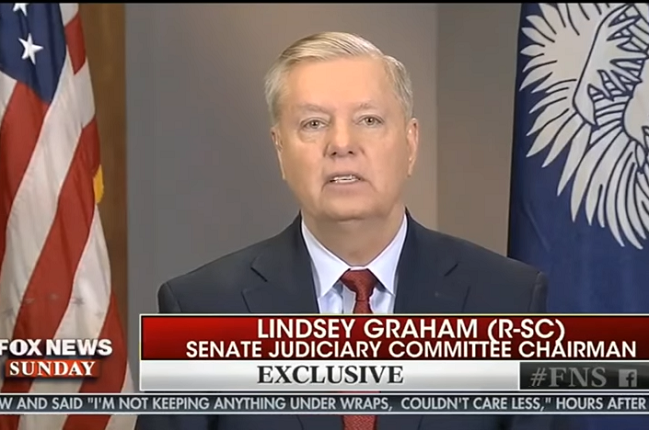 As Ruth Bader Ginsburg watch continues, Senator Lindsey Graham (R-SC) says he’s “hell bent” on replacing her—or any Justice who leaves the Supreme Court—with a conservative.  As the new chairman of the powerful Senate Judiciary Committee, he’s in a position to follow through.

Graham was absolutely horrified and incensed by the way the Democrats treated now-Supreme Court Justice Brett Kavanaugh, and he is obviously still angry and indignant about it.

South Carolina Republican Sen. Lindsey Graham told “Fox News Sunday” that he is “hell-bent” on ensuring that the next Supreme Court vacancy — whether it is ailing Justice Ruth Bader Ginsburg’s seat or otherwise — is filled by a conservative, regardless of what outrage follows from the left.

Graham, the new chairman of the Senate Judiciary Committee committee, emphasized that former Democratic Sen. Majority Leader Harry Reid had eliminated the Senate filibuster for federal appellate judicial nominees in 2013. Republicans later retaliated by eliminating the filibuster for Supreme Court appointments, meaning that a simple majority — rather than a 60-vote supermajority — is sufficient to confirm new Supreme Court nominees.

. . . . Following the contentious confirmation hearings of now-Associate Justice Brett Kavanaugh, which were marked by a series of lurid, uncorroborated sexual misconduct allegations, Graham asserted that there would be “pushback from the left” regardless of whom Trump nominates.

. . . .  “If there is an opening, whether it’s Ginsburg or anybody else, I will urge the president to nominate a qualified conservative and hopefully those people will get through – that person will get through,” Graham continued. “And I expect it to be along party lines, and this is what happens when you change the rules. This has come back to bite ‘ em. I predicted it would. And we’ll see. I hope Justice Ginsburg serves for a long time. But if there’s an opening on this court, I’m going to be hell-bent to put a conservative to replace whoever steps down for whatever reason.”

Pressed by Wallace as to whether it was appropriate to nominate a conservative to replace a liberal icon like Ginsburg, Graham again said liberals have only Reid to blame — and he suggested Kavanaugh’s treatment meant that all bets are off.

Wonder when Howie Carr will have his next death watch show …

Way to go, Lindsey! After your history with mcclain, I didn’t think you had it in you.

He’s still on probation. He will be for some time to come.

And you never know – McCain might come back to try and haunt him.

I wouldn’t applaud yet. It’s hard to tell what Graham’s definition of conservative is, or may be tomorrow. He reminds me too much of former justice Kennedy — likely to go off in any direction, for any reason, or no reason.

What a bizarre concept. Somebody thinks a lifetime appointment should be for an even longer time than that. What a weirdo.

Anyway, she’s not an icon, she’s an old bat. Even if one approves of old bats, icons they are not.

It’s a facile, stupid question. Wallace is either an idiot or is playing to the left.

“Pressed by Wallace as to whether it was appropriate to nominate a conservative to replace a liberal icon like Ginsburg.”

In other words, Wallace is trying to influence policy.

One person’s liberal icon is another person’s leftist rat and betrayer of a sacred oath.

After all, Roberts ASSURED US that there is no such thing as a partisan judge.

But it has been observed/reported that Roberts himself feels an obligation to fill Anthony Kennedy’s “role” as the swing vote. So SCOTUS is now part of the “bipartisan” kabuki theater? It’s all just one big play with assigned roles?

Grassley was ill prepared and slow to realize how quickly events had degenerated. He didn’t gavel-down democrat senators when he should’ve. He allowed protesters to engage in political theater.

Grassley is useless as any old GOP hack who has lost his vision of what America is supposed to be, and why he was elected.

Grassley was all geared up for a rousing round of Failure Theatre to vote Kavanaugh down until Kavanaugh and Graham FORCED them to push it through.

He STILL hasn’t done the slightest thing to censure Feinstein for concealing and then springing the letter AFTER the hearings were already over.

Make the next one Amy Barrett, then after that nominate Merrick Garland, just to make the twittering classes explode.

While there are scratching their heads about that, then re-focus the EEOC to discrimination against Christians, Jews, Scandinavians, people with blonde hair, people whose English is too good, The Icelandic, Scotts, welsh, and people with melanin deficiency, which is going to be a newly invented grievance group. After the protectable outrage tantrum, respond by closing the EEOC, the entire department which houses it, And extirpating all of the race to baste witch hunt laws. But keep the law preventing discrimination against the melanin deficient, who are a historic minority throughout the world. Rumor has it that they were harassed and driven out of Africa 100,000 years ago, and thus need 100,000 years of protection going forward.
In an ideal world, people would be just recognized for their character, not some superficial characteristic or tribal affiliation. but the Democrats and have been working on irritating and magnifying every tribal difference since…uhmm… the Civil War, so this will not occur in our generation.

He looks so much happier now that McCain is gone. I am too.

The ending lyrics of the song are:

This guy’s wife came out to the garage and started to complain about how much time he was spending with his tools, hobbies, and motorcycle. He said you are starting to sound like my ex wife. She said you never told me you were married before, he replied, i wasn’t.

If the opening occurs next year, the flip-flopping regarding the “Biden Rule” will be entertaining to watch…

“Pressed by Wallace as to whether it was appropriate to nominate a conservative to replace a liberal icon like Ginsburg, ”

Yes it’s appropriate because there is nothing in the Constitution about liberal and conservative judges.

And can anyone really expect anyone on the right to believe that if during Obama’s first two years as POTUS while Democrats controlled the Senate if a judge like Thomas had stepped down he’d appoint a judge just like Thomas?

And before anyone says Merrick Garland remember two things:

#2 Obama nominated Garland knowing the Republicans would either refuse to vote or vote him down. So it was more of a political stunt to try and help Hillary during he campaign.

On #2- that backfired. Motivated more people to vote for Trump.

As for ads- This is one of the sites I don’t go to on Chrome for Android. Brave for Android handles it just fine.

First, just about done with this site due to the take over by ads. Second, I don’t want a conservative or a liberal, I want a Constitutionalist.

First, just about done with this site due to the take over by ads.
Get a good ad blocker. It helps.

“First, just about done with this site due to the take over by ads. Second, I don’t want a conservative or a liberal, I want a Constitutionalist.”

But first: a word from our sponsors….

No, JoAnne! Don’t go, you’d be missed. Right now, you are the only one writing about this, so I don’t know what you are experiencing (I’m not having problems, but I was suffering from that recent posts video thing that everyone was complaining about). Send an email to the prof (via the provided link by/in his profile) and let him know exactly what is going with your LI experience. We got rid of that crazy popup autoplay video thing that was crowding out the page because of reader input, so what you say does matter.

FWIW, Fuzzy, I stopped complaining about the ads when, every time they were mentioned, someone from the site would rather heavy-handedly explain that the site needs revenue to continue. I was pretty sure that most commenters already knew that. My takeaway was that complaints were not welcome. Personally, I can only view this site with an ad blocker on; if I try to view it without one, my computer crashes.

Anonamom, we DO need the revenue. But that is not separate from our reader experience. We have to have the income, but we have worked very hard to ensure that ads don’t overly infringe on our readers’ experience on LI.

If you don’t tell us what is wrong, we don’t know. If you think we don’t care, you are wrong. We do, very much.

Hang in there. The problem, at least for me, seems to be much less. Sent an email about it on the 6th of Jan. The last several days have been less. Read your comment, so navigated around the site. Only had one incident with an ad. This is considerably better than previously.

Very few sites that depend upon add revenue are useable without an add blocker to stop the worst stuff from sneaking through.

I have it on my desktop, but not on my laptop. I’m on my laptop now and each keystroke is often several seconds or more behind…

When it gets real bad I switch to the desktop.

Chris Wallace is a liberal Democrat, that’s why he asked Sen. Lindsay Graham if he won’t replace RBG with another Democrat – or face another Brett Kavanaugh-like donnybrook. (Some commenters were wondering why Wallace would ask such a silly question. That’s why.)

I wonder if RBG is that likely to fully recover so she can perform her duties “full steam” as she likes to say. If not, she’s promised to resign.

There may be no such thing as a “conservative Justice”. And relying on such a mythical creature to ride to the rescue may be pure futility.

I’ve written before about the fictional belief that SCOTUS was ever intended to be the guardian and ultimate interpreter of the Constitution. Now consider the improbability that it can ever reliably perform such a function.

Justices have extraordinary and arbitrary (albeit not unlimited) powers, and they themselves are the only ones who determine the limits of those powers. The ultimate controllers of many other offices—the voters—have no say in the matter.

Now, what are the chances that a person in a position of such Olympian grandeur will give serious consideration to a document written specifically to limit his powers?

But Justices are unlikely to think of their state as “corruption”; they’re not likely to think of it at all. After a career building up to that reward, there’s little need for reflection; they’ll just accept their just deserts and dream up emanations of penumbras.

This is not the formula for a republic. It is an oligarchy.

What is a possible solution? Maybe term limits . . . for everyone. Including judges and bureaucrats. It’s the only protection—even if not a very good one—against “empire builders” or a corrupt, self-serving and self-perpetuating oligarchy.

This is why they’re all—both parties—terrified of DJT. He’s not part of the oligarchy; he’s above that already, even higher than their thrones on Olympus, he’s Donald Trump, he always was, he always will be. The Presidency is just a another job to him, not an ultimate reward for being a good servant of the other oligarchs. He’s not an oligarch, and there’s no room for him in their world.