As goes the news industry, so goes Newseum, which came under fire from journalists for selling MAGA hats. 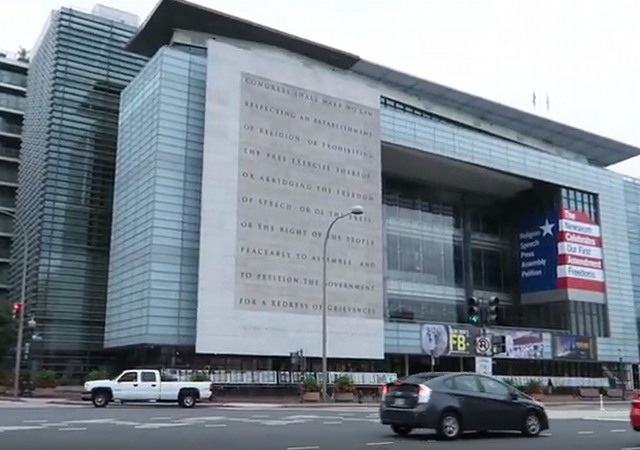 The Newseum is a non-profit museum in Washington, DC devoted to journalism. They just sold their massive building to Johns Hopkins University and will now look for a new location. It will remain open at its current address through the end of this year.

The Newseum, a museum dedicated to journalism and the First Amendment, and located in a prime piece of real estate along Pennsylvania Avenue, will close at the end of 2019.

The Freedom Forum, the creator and primary funder of the museum, announced the closure as part of the building’s sale to Johns Hopkins University, which will acquire the property for $372.5 million. The forum cited unsustainable operating costs.

Jan Neuharth, the chairwoman and CEO of the Freedom Forum, said they will “explore all options to find a new home in the Washington, D.C. area.”

The museum — an elaborate, glassy, and modernist facility — opened in 2008, and has drawn visitors with a mix of exhibits, such as a piece of the Berlin Wall, remnants of the antenna atop the World Trade Center, a journalist’s memorial, and other displays devoted to reporting and news gathering. It had become a popular locale for film screenings and premieres, such as a red carpet gala last year for the movie “The Post.”

This passage from a report by Colin Dwyer at NPR is rather enlightening:

Founded just across the Potomac in Northern Virginia in the late 1990s, the museum moved into its glamorous glass-and-steel home with much fanfare in spring 2008. But even back then, as NPR’s Elizabeth Blair noted at the time, there were some doubts about the fiscal wisdom of a project with a price tag of roughly $450 million.

Those concerns only grew in recent years, as its relatively high entry fee — about $25 per adult, surrounded by the free Smithsonian museums — and its reportedly consistent deficits portended ill for the Newseum’s financial future.

Over the last two weeks as the Covington affair has dragged on, we have learned how most people in American media really feel about ‘Make America Great Again’ hats. In hindsight, we probably should have known that already.

Back in August of this year, some journalists became incensed when they learned that the Newseum was selling MAGA hats and ‘fake news’ t-shirts.

The Newseum in Washington, D.C., is an interactive museum that celebrates the role and history of the media in America.

So, what are among the top-selling items in the museum’s gift shop and through its online store? Red caps that say “Make America Great Again,” and T-shirts that say “You Are Very Fake News.”

But the popularity of items associated with President Trump has been irritating many members of the media, Poynter.org, the website for a media think tank, reported…

As for sales of merchandise at the museum, Sonya Gavankar, a Newseum spokeswoman, told Poynter that “the MAGA hat and the FBI hat are two of our best-selling items.”

“As a nonpartisan organization, people with differing viewpoints feel comfortable visiting the Newseum,” she said, “and one of our greatest strengths is that we’re champions not only of a free press but also of free speech.”

But a member of the White House press corps, on condition of anonymity, objected to the Newseum selling political merchandise, adding that “fake news” apparel was an “insult to journalists,” Poynter reported.

Maybe if the Newseum had sold more MAGA hats and ‘fake news’ t-shirts, they wouldn’t have needed to sell their building. It’s something of a metaphor for the decline of the news industry.

Interesting. I wonder what would have happened if this newseum sold American flags instead? “American media”. What an oxymoron.

notamemberofanyorganizedpolicital in reply to Whitewall. | January 27, 2019 at 9:11 pm

Here’s some bumper stickers they can sell.

All the news that fits our script.

I suggest they set up a booth at some area flea market. Or maybe have Dan Rather do pole dances at the “Ink Stained Wretch” Gentlemen’s Club in Norfolk VA.

I was there when the Newseum was opened. It looked like a real estate investment, to me.

It seemed very self-congratulatory at the time, and I never took my kids.

They would still be in business if Dan Rather or Kneepad Nina Burleigh was doing their accounting.

Send the back to their parents’ basement. OTOH, there are many opportunities in Detroit.

FTA the facility cost $450 million and is now being sold for $372 million. An example of news business economics.

Actually, it would shock me if the backers did not plan this trajectory, although slightly short of their target. Build a building for $450m, accept donations from suckers, pay the minimum payments on a balloon mortgage while siphoning off as much cash as they could, then dump it by bankruptcy the minute interest rates start rising. If I’m right, there are ‘special’ bondholders who will be paid off at 100% of their investment, and ‘sucker’ bondholders who will be paid off with whatever’s leftover, which will be peanuts.

Then if they’re cagey, the smart investors are turning around and picking up the property at the bankruptcy sale so they can turn it around for the business they were planning on in the first place, cheap.

This museum used to be on the other side of the river in Rosslyn and was one of my favorites. It was moderate size and free. Every time I was there it was jammed. At the mall location, they are in a cavernous building and very pricey. I can’t afford to go there anymore.

Gee, who could have seen that coming? Why’d they build a monument for a bunch of people who should be in prison?

Maybe if the Newseum had sold more MAGA hats and ‘fake news’ t-shirts, they wouldn’t have needed to sell their building.

Um, what is this meant to imply? It sold as many of these items as people wanted to buy. If you think it should have sold more, you’re saying that they’re not popular enough, which I think is the opposite of your intent.

I wonder what would have happened if this newseum sold American flags instead?

What makes you suppose it didn’t?

Back in August of this year, some journalists became incensed when they learned that the Newseum was selling MAGA hats and ‘fake news’ t-shirts.

But not so incensed to stop propagating ‘fake news’ when it fit the liberal narrative, I suspect.

With all that glass and in that location, it looks just like an expensive office building that never would have gotten the permits if it was built that way, but built as a museum, then going bankrupt, it may just turn into one. Imagine that.

Yeah…seem odd for a museum dedicated to FREE speech and FREEdom of the press has a $25 cover charge….

Door Guy: Well, to get into The Newsuem…25 bucks…

Free speech does not and has never meant “without cost”. The “free” in “free speech” is not the same word as the “free” in “free beer”. Everything costs money, and if you’re not paying it someone else is. So who exactly should pay for a museum if not its customers?

Milhouse,
Long ago we had a jam band and thought it would be funny to call the band, “Free Beer”…
We were playing a bar, everyone there was in on the joke…then some bikers walked in cause the sign said, “TONIGHT FREE BEER”…
So we bought the bikers beer all night. The bar tab ended up being more than the band was being paid…Yes, we changed the name of the band…

Anyway…I’m aware freedom’s not free….ect….I was just joking, Milhouse.
Although, according to InvisibleHand’s post, when the Newsuem was in a smaller building….it WAS free.

I was told the “Ethics” section was smaller than the gift shop. Seems appropriate

Yeah, sure, but so-called “journalists”/”reporters” were just fine and dandy – and oh so very proud – to don their “Journalists For Obama” t-shirts and wear them in public during Barack Hussein Obama’s campaign, the feckless Fake News lapdogs!

Perhaps the Newseum should join Public Broadcasting and NPR to get government subsidies to cover their bad business model and bad business decisions, too. Or better yet, the House should pass a bill to fund it directly. It’s the “people’s newseum”….

The Newseum has more than one location? Who knew? And who cares? I have always had about as much interest in visiting the Newseum as I have had in experiencing a root canal.

I was at The Newsuem last week and was REALLY impressed with the “Unidentified Sources Close To The Investigation” exhibit….

“The Newseum”? A museum dedicated to journalism? That’s got to be a joke. Journalists are supposed to report the news, not be the news. It’s almost like having an awards show for awards shows.

No surprise that a university could afford to pay $372.5 million for the site with no worries about ‘unsustainable operating costs’ – just add to your student’s debt while collecting tax dollars from the Feds – Easy Peasy!