KUSI says it offered CNN a reporter to talk about border wall effectiveness, but CNN passed on it. CNN says it’s a “non-story”. 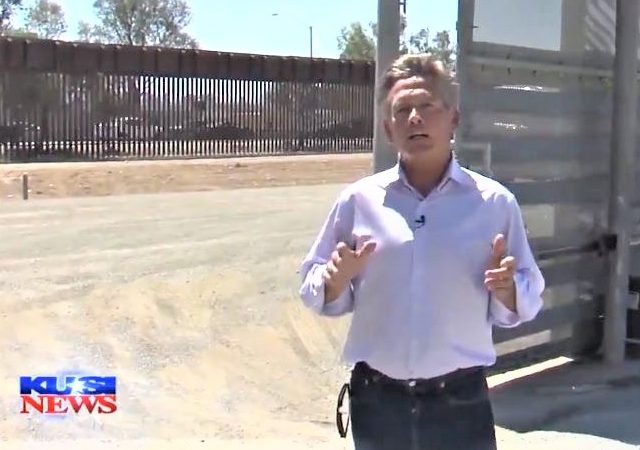 As a conservative citizen activist residing in San Diego, I have always been impressed with the news coverage of KUSI’s wonderful team.  Its reporters always gave us a fair hearing and covered our stories honestly.

So, it was with great interest that I read the story, which went viral, KUSI had offered CNN a reporter to give the cable news network perspective on the area’s functional and effective border wall…but was rejected.

A San Diego television station accused CNN of dropping an appearance by one of its reporters after learning that person’s reporting does not fit an anti-border-wall narrative — an allegation the cable news network denies.

KUSI this week that CNN had asked whether one of its reporters could appear on the network and talk about the local debate surrounding the border wall and government shutdown.

Thursday morning, @CNN called the KUSI Newsroom asking if a reporter could give them a local view of the debate surrounding the border wall and government shutdown. After we informed them about our past reports, they declined to hear from us.

In addition to the coverage on its news show, KUSI prepared a detailed article with videos on its previous coverage of the local barrier and how the immigration crisis affects the San Diego area.

We believe CNN declined a report from KUSI because we informed them that most Border Patrol Agents we have spoken to told us the barrier does in fact work.

We have continuously been told by Border Patrol Agents that the barrier along the Southern border helps prevent illegal entries, drugs, and weapons from entering the United States, and the numbers prove it.

The story received a great deal of attention, especially after it was mentioned by President Donald Trump.

.@CNN called a San Diego news station (@KUSINews) for negative reports on the Wall. When the station said that Walls work, CNN no longer had interest. #FakeNews pic.twitter.com/IDyXqmDsPq

CNN responded, dismissing the charge as a “Non-story”.

We called several local stations to book someone for a show. We didn’t end up booking any of them. That happens many times every single day. We did, however, book a reporter from KUSI for a story on immigration and the border wall in November. This is a non story. #factsfirst????

The Associate Press claimed that KUSI was backing off its claims.

At first @KUSInews “accused CNN of rejecting an appearance by one of its reporters for political reasons.” But now the news director is conceding “he didn’t really know why the network turned him down,” the AP’s @dbauder reports https://t.co/KOiBrwpEds

Now, KUSI is hitting back, disputing that is it backing off. News Director, Steve Cohen, issued a statement discrediting reports that KUSI has “backed off accusation” about CNN’s border wall coverage.

KUSI is standing by its reporting on its dispute with CNN after an article from the AP indicated their news director appeared to be backing off.

… [The] AP ran a report headlined “TV station backs off accusation that CNN played politics.” Their report quotes KUSI news director Steve Cohen as saying, “It’s certainly plausible that they didn’t want it for the viewpoint, or they just didn’t want it. Both are plausible conclusions. I made one rather than the other.”

However, KUSI is standing by its original reporting. After the AP report, Dan Plante––the reporter at the center of all this-–appeared on Fox News and criticized CNN for not wanting to hear the truth from them. 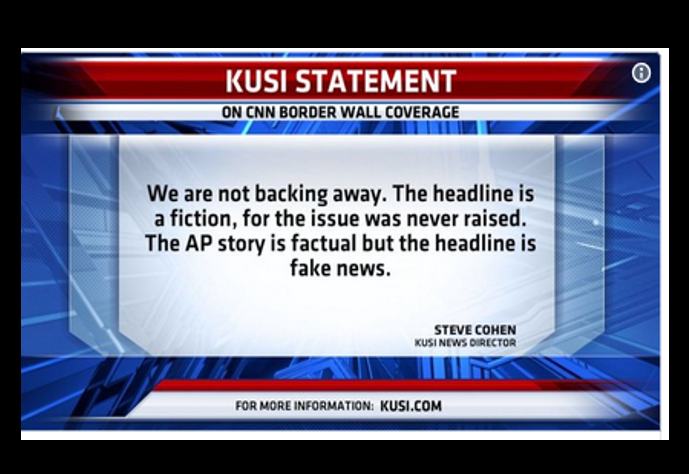 In the AP story, Cohen said he never spoke to anyone about CNN about why Plante wasn’t used.

“It’s certainly plausible that they didn’t want it for the viewpoint, or they just didn’t want it,” he said. “Both are plausible conclusions. I made one rather than the other.”

Between these two news organizations, I know which one I’m going to believe.

Not a bit surprised, given that CNN is owned and operated by enemies of the American people.

Full disclosure: I stopped watching television over twelve years ago. All television, not just TV “news”.

15 years here. Now when I visit someone who has their television on, I’m completely disgusted that they can’t see through what I see as blatant attempts to control what people think.

And an interesting wrinkle to this story is that Dan Plante’s brother, Chris, used to work for CNN and is a scathing critic of the organization and journalism in general. He also has a bully pulpit as a talk show host on WMAL in DC. I’m sure that CNN spits when they hear the surname Plante.

Not a bit surprised that CNN is being protected, with the AP doing the dirty work to prop them up.

They’re all dirty. 90%+ Democrats, all indoctrinated by the “best” J-schools at “elite” universities…… Yeah, no brainer.

Question: why does ANYONE believe the media anymore? All “big media” that is. The locals, for the most part, are still biased but at least don’t take everything the the over-the-top political [email protected]*t crazy level! That is what the propaganda machines do, their self-declared mission as “fellow-travelers”: CNN, MSNBC, AP, WaPo, NYT, etc. etc. etc.

We didn’t end up booking any of them. That happens many times every single day.

So, they do it routinely.

I’m not sure that makes it all better.

So CNN found out in the course of it’s research that there is pro-wall sentiment in San Diego. Did that information ever air in any of it’s reports from any source in any form?

That wall was built in response to” public outcry. About 30 years ago, citizens staged a determined “Light Up The Night” campaign by parking their cars facing the border on a nearby elevation every night.

As I’ve been arguing for over 20 years, the CA border wall has been effective. But try convincing Texans and other CA haters. Most border crossers are crossing in Texas and Arizona. The main problems in CA are sanctuary laws and the federal catch and release program which make a mockery of border security.

“KUSI had offered CNN a reporter”

Minor nit to pick … I’ve read elsewhere CNN put out a call for reporters from the area to opine; KUSI responded.

I will comment in the future. My only comment so far is a request to remove the dancing demon from the top line of photos–and you did!