“Let’s eliminate all of that. Let’s move on.” 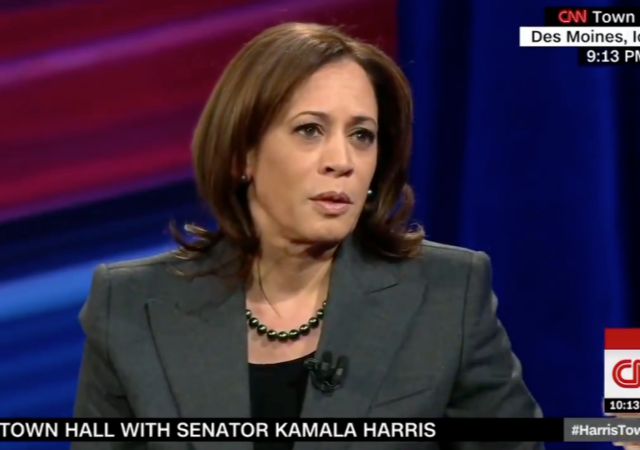 Democratic presidential candidate Sen. Kamala Harris (D-CA) came under a lot of heat during her CNN townhall when she said she wanted to eliminate private health insurance.

Despite the backlash she received for her comments, Harris’s press secretary Ian Sams attempted to clarify that she still believes in Medicare-for-All, which would also eliminate private insurance… political doublespeak at its finest.

In which Jake asks Kamala Harris whether people would be able to keep their private insurance, if they prefer, under Medicare For All system — and she rejects that. “Let’s eliminate all of that. Let’s move on.” pic.twitter.com/A1AY2TOT4g

Harris received a lot of criticism for her stupid remark, but she is sticking with her belief that Medicare-for-All is the right solution for America:

“Medicare-for-all is the plan that she believes will solve the problem and get all Americans covered. Period,” Harris campaign national press secretary Ian Sams told Fox News.

“She has co-sponsored other pieces of legislation that she sees as a path to getting us there, but this is the plan she is running on,” he added, suggesting potential support for other options as well.

This morning, I saw this headline at CNN, which made me think maybe Harris backtracked a little.

Silly me! This is how CNN framed Sams’s clarification:

As the furor grew, a Harris adviser on Tuesday signaled that the candidate would also be open to the more moderate health reform plans, which would preserve the industry, being floated by other congressional Democrats. It represents a compromise position that risks angering “Medicare-for-all” proponents, who view eliminating private health insurance as key to enacting their comprehensive reform.

Both the adviser and Harris national press secretary Ian Sams said her willingness to consider alternate routes to a single payer system should not cast doubt on her commitment to the policy.

“Medicare-for-all is the plan that she believes will solve the problem and get all Americans covered. Period,” Sams told CNN. “She has co-sponsored other pieces of legislation that she sees as a path to getting us there, but this is the plan she is running on.”

Excuse me!? In other words, Harris still wants Medicare for All. She didn’t change her mind or flip-flop. She may have struck out the part of wanting to eliminate private health insurance companies, but she is willing to continue taking steps to implement Medicare for All. People love Medicare-for-All until you remind them that the private markets will no longer exist.

You cannot have the private market along with Medicare-for-All:

Harris, it seems, is not quite there anymore either; or if she is, she is also somewhere else. Last night, she gently moderated her position, with a spokesperson telling CNN that she is open to other policy paths, although she continues to support a single-payer plan that would end private health insurance as well.

It is not exactly a walkback, but it is a tacit acknowledgment of the resistance to her initial remarks. She continues to support a plan that would make today’s private health insurance plans illegal while forcing most everyone onto a government-run insurance system. But she supports alternatives as well, presumably ideas like creating a government-run insurance plan that would be sold alongside private plans, or allowing more people to buy into the existing Medicare system, or something like it.

In other words, she also supports plans that are not full-fledged single-payer, the entire point of which is to replace all existing insurance with, yes, a single government-run health coverage plan.

“I don’t want to guess what (Harris is) thinking but that is a massive part of the American economy. There is a system in place for funding it,” Durbin said. “It would take a mighty transition to move from where we are to that.”

Yeah, as someone with numerous pre-existing conditions, I want my private health insurance.

The declaration in the townhall doesn’t seem to have harmed Harris in the polls. A Politico/Morning Consult poll found Harris in third place, gaining numbers since she announced her presidential candidacy. She is at 10%, up from the 3% she had earlier in January. She still lags behind former Vice President Joe Biden and Sen. Bernie Sanders (I-VT). 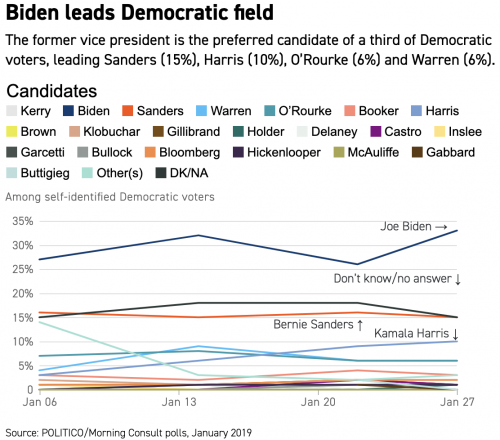 The Bernie Bros aren’t going to vote for a corporate Democrat. She has to act like she isn’t one during the primary season, but most of them aren’t fooled by the charade.

The rule is simple: If it increases governmental power, she’s in favor of it no matter what words come out of her mouth.

Before everyone’s heads explode over Dem Presidential candidate remarks, they may, but probably don’t, reflect their views on anything. If their lips are moving, their lying.

Harris, and ever other professional politician, believes in only one thing, whatever works to her benefit. If pushing for the abolition of the health insurance industry gets her nominated, she’s all for it, publicly. The industry can always buy her off later.

I would support her if she also came out against private ownership of golf courses. There is a nice country club in my town that I am not a member of so I can’t play it. If KH promises to fix that, she has my vote.

She accidentally told the truth and it caused her some problems, so she blew smoke to make the problems go away.

She hasn’t even been running a week and already I’m seeing a pattern.

Queen of the ‘willie browns.’

If you love waiting on line at the DMV and love the service you eventually get, you’ll love ‘KamalCare.’

“Why ignorant people are so arrogant?” —

Arrogance is a defense mechanism to protect against shame. Arrogant people conflate having wrong ideas with their being something wrong with them. Because having something wrong with them would be too much to bear – too much shame – their ability to learn is heavily impacted. To learn often involves setting aside wrong ideas, and doing so is very difficult for arrogant people, because of the difficulties involved in recognizing ideas they have as possibly being wrong.

This makes them ignorant.

If you cannot learn, you remain ignorant.

This is especially the case when relationships are involved. Just letting go of wrong ideas in general is often difficult for arrogant people, but this is especially the case when it involves their own behavior. Here they are intransigent, incredibly rigid and stubborn. They cannot bear the idea of doing anything wrong even more than wrong thoughts, so their ignorance is especially evident where relationship behavior is involved. They will not change their behavior. They remain ignorant.

This follows from the fact arrogant people are ignorant.

Not all ignorant people are arrogant. For example, a person can be ignorant because they have a learning disability. But all arrogant people are ignorant, and ignorance can involve an inability to perceive wrong thinking, which can make one appear to be arrogant.

Arrogance is likely more often a result of overly-abundant self-esteem. Quite common at “elite” universities in particular, generally accompanied by unearned wealth.

A couple questions.: 1) Will ALL federal employees and members of Congress be covered via MedicareForAll? No carve-outs, Cornhusker kickbacks, Louisiana Purchases?

2) If Medicare is such a great program why is it all of us who can manage it purchase Medicare supplemental insurance? I’ll answer my own question–Because the Medicare alone does not cover much of anything.

Medical practices today have to limit the number of patients they can handle who are on Medicare. The compensation for services is so low the docs need about 75% private coverage to keep the doors open and the lights on.

I’ve been saying this for a few months now. Until now, the Democrats have had to lie about their true goals to get elected.

The Democrats have convinced themselves that Trump was a fluke.

They believe that they will never be out of power again.

Harris’ ridiculousness with healthcare and guns, NY and VA blatantly putting abortion until birth into place, and many other things.

The Democrats are so sure that they will remain in power that they believe they no longer have to lie about their goals.

You cannot have the private market along with Medicare-for-All:

The reason for this is because the public insurance requires those covered to continue to pay into it. At the moment, only Medicare Part A is free, if the covered has paid into the system long enough. However, it provides limited coverage and large deductibles. Medicare part B and D both require the payment of premiums, for coverage. They to limit coverage and have deductibles. Part C, which is essentially a public-private partnership, severely limits access to medical providers. Now, expand this coverage to those under age 65. What happens? The insured HAVE to keep paying in, but at a far higher level as the program has to cover far more people. And, the increased percentage of income which has to be paid into “Medicare” will eliminate the ability of most of society to afford private medical care insurance. At some point, probably rather quickly, the program becomes insoluble, unless extreme cost controls are instituted. To be effective, these controls will have to apply directly to the service provider. Currently, there are several states which prohibit medical practitioners from billing, and accepting, lower rates for cash patients then they do for insurance patients. This will result in the reduction of income for medical practitioners and facilities. Which will result in the reduction is access to medical treatment.

Huge public health insurance providers created the healthcare cost problem that we have today. By creating a guaranteed third party payer, the medical profession was able to raise costs far above the coat of living. And, as these insurers only paid a fraction of the billed costs, this raised prices even more. It reached the point where the average consumer can not afford any medical care without a third party guarantor [health care insurance]. Expansion of these public programs will simply kill both the insurance industry and the medical profession.

And the always prescient:

“If you think health care is expensive now, wait until you see what it costs when it’s free.”
― P.J. O’Rourke

With the great help of “Sugar Daddy” Willie Brown admitting that he dated her while married, Kamala “Horizontal” Harris is a laughing stock and her ambitions to use Skin Color as did Barack Obola to get elected, are over. Nobody cares what she has to say because stick a fork in this one; it’s DONE.

Kamala has been adopting whatever persona she needs to advance her personal political agenda : hard on Black crime (cause she’s not Black)); anti-immigrants – (cause one parent was from India and another from Haiti); hard on Black Crime – to further her political career after she slept with Socialist Willie Brown while he was marries – She Is A Winner – The Great Kamala
https://www.youtube.com/watch?v=kKLMjYFjNv0

turn AMERICA into a VENEZUELA s**thole vote for Kamala