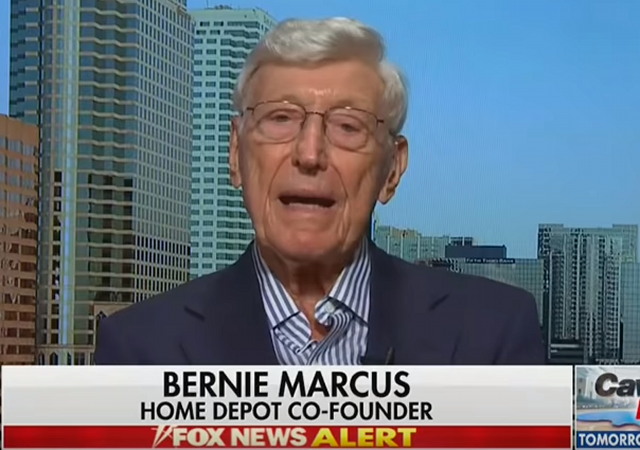 Home Depot co-founder Bernie Marcus recently commented on Neil Cavuto’s FOX News show on the rise of socialism, especially the new Ocasio-Cortez wing of Congress, and the role higher education has played in the phenomenon.

Marcus is right to recognize higher education as a key player. Left wing concepts of social justice have quickly moved from the halls of academia to Washington, DC. Democrats in Congress increasingly sound no different than campus activists.

Home Depot billionaire co-founder Bernie Marcus said Friday that the growing appeal to socialism in America comes out of the universities.

Marcus, during an interview with Fox News’ Neil Cavuto, discussed the deterioration of socialist Venezuela and Cuba, comparing the situations in those countries today with the realities there decades ago, pre-socialist rule. Marcus called the economic downturns in each of those countries, Cuba, in particular, a “perfect example of socialism gone wrong.”

“They [Cuba] took a great country. They put it right down the drain in every way possible,” Marcus said. “People are starving to death. Medical [care] is not available for them. And we have a group of people in Washington today, new representatives especially, that look at socialism as the way to go and if you don’t think that’s dangerous, I do.”…

“It comes right out of the universities. You see students graduating today and a very high percentage…almost 50 percent of students coming out of universities today believe that socialism is the answer,” Marcus said. “That’s frightening to me because the things that made this country great, that created the wealth of this country, and I mean the wealth of every single person right down the line, the best medical care in the world, the best housing in the world, that’s why people want to come here, is because of the system, and that’s the free enterprise system.”

We have covered many higher education stories over the years which involved socialism on campus. Interest in socialism among students continues to grow with organizations like the Young Democratic Socialists of America. These students are emboldened by the popularity of Ocasio-Cortez and Bernie Sanders.

This 2017 piece by Vice News explains quite a bit about the appeal:

Socialism is surging on college campuses

Seizing the means of production is so hot right now.

Long relegated to the fringes of American politics, socialism is surging on college campuses in the aftermath of the presidential campaign of Bernie Sanders — a self-described democratic socialist — and Donald Trump’s victory. The Young Democratic Socialists of America went from 12 chapters at the end of 2016 to 47 in June, and at least 100 are expected by the end of this semester (329 colleges registered for materials in August).

“By losing an election to Donald Trump, the Democrats demonstrated that they aren’t the answer,” 20-year-old Michelle Fisher, the national co-chair of the Young Democratic Socialists of America and a junior at Wesleyan University, told VICE News.

But it’s not just because of Trump: Fisher’s disaffection with the Democratic Party has been brewing for some time. “I think when [Barack] Obama was president, I thought he was fine because I didn’t know any better,” she said. “He inherited a lot, but he did a lot to continue the U.S.’ imperial politics and also deported more people than any other president.”

If someone views Obama in this way, is it any wonder why they think moderate Republicans are the extreme right?

Home Depot is no Starbucks.

Bet it comes to an end if we kill off the Department of Education!

notamemberofanyorganizedpolicital in reply to princepsCO. | January 29, 2019 at 2:10 pm

And cut all public funds, Federal and State out of education.

All Real Education is LOCAL and all its money should be local – like within the city and county.

regulus arcturus in reply to notamemberofanyorganizedpolicital. | January 29, 2019 at 9:08 pm

All colleges and universities are recipients of government funding now, and should be sued as such for ongoing leftist totalitarian infringements on student liberty, and must be held to account for pushing leftist agendas in fraudulent research.

Finally! Somebody who doesn’t mislabel it “capitalism”.

notamemberofanyorganizedpolicital in reply to tom_swift. | January 29, 2019 at 2:12 pm

Insufficiently Sensitive in reply to notamemberofanyorganizedpolicital. | January 31, 2019 at 11:13 am

The word’ Capitalism’ was devised by far leftists beginning with Karl Marx, as a pejorative label to use against the free enterprise system, in which individuals made their own decisions about what and when to buy or sell, and about offering goods and services in hopes of making a living.

That’s the only way any honest person could have considered the illegal alien president even a bad president………..

Theft is always a faster way to wealth (for the seizers) than work and capital accumulation, but soon enough, the party ends as the plunder runs out, and then we’re in dystopian novel times (or lots of history).

notamemberofanyorganizedpolicital in reply to civil truth. | January 29, 2019 at 2:11 pm

I wonder how socialists can fool so many people, when we have over a century of history showing that socialism turns into a ruined economy, followed by totalitarianism. We have:
Lenin and Stalin in the Soviet Socialist Republics
Hitler in the National Socialism party
Mao in China
Pol Pot in Cambodia
Castro in Cuba
Chavez, then Maduro in Venezuela
and many more.

Socialism provides the control over society that dictators need to stay in power. College students have to be both ignorant and stupid not to see how socialism and individual liberties are incompatible. The Dems are moving toward socialism, and one of their major goals is to disarm the people, which is one of the major requirements for a socialist dictatorship.

It will always be different the next time it is tried. The same mistakes won’t be repeated. The leaders are pure at heart socialists this time, not greedy money grubbers like the people they overthrew. They won’t oppress the people or spread misery equally among the working class because they are smarter than those who came before them. The workers want to believe in puppy dogs, rainbows and unicorns where they don’t have to work hard to get their “fair share”…… etc., etc., etc.

Hey, the old Romans knew what they were talking about 2000 years ago: Populus vult decipi, ergo decipiatur.

I can tell why the young believe that it is the answer. My 30 year daughter who is one of the smartest people I have ever known thinks it will work. She is a mom and wife and a professional. She has a lot of student debt and so to does her husband. This is the first generation that has so much debt. She has worked for and earned everything she has but feels that the system is not fair. And as with so many smart people, they do not understand that she is not like most ordinary people. She is a hard worker but cannot understand that many are not. If everyone were like her, socialism might work but as we all know the world is not very smart or motivated to work. She suffers from idealism and I can guarantee you that there are many more like her from the millennial generation that have a liberal college education.

notamemberofanyorganizedpolicital in reply to inspectorudy. | January 29, 2019 at 8:12 pm

You DO Remember how Obama made Student Debt un-forgivable don’t you?

Think of that. You can unload or re-negotiate all your debts but “student loan debt.”

Obama did it to further Communism/Socialism.

What does your daughter think or have to say about that?

Ask her why Obama would do that if he was so caring…..

She is a hard worker but cannot understand that many are not. If everyone were like her, socialism might work

She’s playing the role of the Horse in Animal Farm. ‘I will Work Harder’. He works himself to death, and the pigs get the Castro – Hugo Chavez role and prosper.

I am a legal immigrant from Poland and a proud US citizen! I know the Socialism because I lived through it! Socialism does not work! It kills middle class and takes away incentive to work hard. Socialism creates only those few in power,and all other are only expected to follow and obey. If you do not obey and follow you become the enemy of the deep state. Socialism will kill “American Dream”! Belief me!

I guess the names Marx and Engels mean nothing to anyone. They were the talk of the town wherever they went until they got thrown out. Thanks for the legacy you pieces of trash, over 100 million lives lost in their name.

A few years back in a soc 101 class (required) I was required to read the Communist Manifesto and we discussed it in class. The teacher made it quite clear that Communism was a good and important advance for humanity.

The textbook described Marx as one of the most important sociologists who ever lived. To me that seemed like pure propaganda but compared to the propaganda I ran across in a World History class at about the same time, it didn’t even seem very important.

Sigh. I was older than the other students and wasn’t fooled. I know for sure some of the others were fooled. Most just did the minimum work required to get the easy … C+ … and got on with their lives.

See Polybius (2nd Century BCE), “the Rise Of the Roman Empire”, book VI ch.9. These things go in fairly predictable cycles, and the people who buy this shit always end up dead or in chains.

For a more recent work, see Kipling’s “the Gods of the Copybook Headings”, which ends with:

“As it will be in the future, it was at the birth of Man
There are only four things certain since Social Progress began.
That the Dog returns to his Vomit and the Sow returns to her
Mire,
And the burnt Fool’s bandaged finger goes wabbling back to the Fire;

“And that after this is accomplished, and the brave new world begins
When all men are paid for existing and no man must pay for his sins,
As surely as Water will wet us, as surely as Fire will burn,
The Gods of the Copybook Headings with terror and slaughter return!

Where has everybody been? Ayn Rand was warning us almost fifty years ago about the poison that universities were putting into our childrens’ heads. Building on her work, Rand’s student, Leon Peikoff, gave a lecture at the Ford Hall Forum in 1983 entitled: Assault from the Ivory Tower: The Professors’ War Against America

The “socialist” have been working towards making America a socialist country for 75 years.

Where have you been? The Socialist Party started up 117 years ago, and Eugene Debs was running for President before 1930.

Thanks, Crying Boehners. Thanks, Jeff Sessions.

Hat Tip to Ace of Spades

“Socialism ‘comes right out of the universities.”You Think.

The problem is these people have no sense of macro or micro economic literacy. You can show them the literal failure of socialism and they will deny it.
See: https://gfycat.com/ZigzagDamagedBarracuda

He said some decent things. Too bad that his own company is run by a bunch of Leftists. Maybe he should start cleaning house a little closer to home instead of worrying about indoctrination at the universities, however true it may be.

Marcus is spot on. Our colleges and universities have been controlled by Communists and Marxists for decades. The trend in the last decade is to infiltrate K through 12.