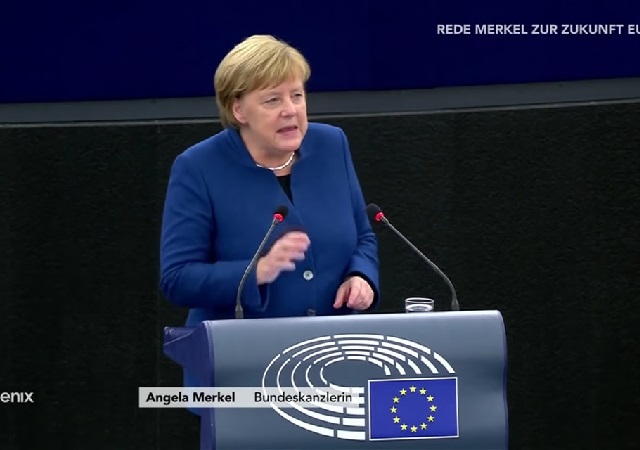 Berlin will be lobbying the United Nations to secure a permanent seat at the Security Council for the European Union, German state media said.

“Over the next two years, Germany’s main concern will be to try and ensure that the European Union as a whole is given a permanent seat,” public broadcaster Deutsche Welle reported Tuesday. This year, Germany takes up the non-permanent seat at the Council for a two year term.

The move comes after the Macron administration rejected German request to turn France’s permanent seat at the council into a joint EU one. Germany’s Vice Chancellor Olaf Scholz urged Paris to share its seat with Brussels. “In exchange, France will get to permanently choose the EU representative to the UN,” he proposed.

The Council consists of five permanent members (China, France, Russia, the United Kingdom, and the United States) and ten temporary members elected by the General Assembly. The coveted permanent membership comes with the veto power, which gives a country the ability to block resolutions and influence decisions at global level.

Germany has a lot of plans it wants to implement over the next two years. At the UN General Assembly in September, Foreign Minister Maas advocated strengthening multilateralism, which has come under pressure from, among other things, the “America First” policies of US President Donald Trump.

“The United Nations is at the heart of the multilateral system,” said Maas before departing for New York earlier this year. “We are living at a time when we need more international order, more reliability, more confidence in our common rules. The United Nations is as strong, just and effective as its members make it.”

Germany also intends to advocate for a strong UN and a strong role for Europe in its various bodies. Over the next two years, Germany’s main concern will be to try and ensure that the European Union as a whole is given a permanent seat. After Brexit, the only EU country represented on the Council will be France.

The German efforts are consistent with Chancellor Angela Merkel’s plan to transform the EU into a major geopolitical power. In August 2018, Maas laid out a pan-European plan to forge a “counterweight” to the U.S., a strategy backed by Chancellor Merkel. Writing in the business newspaper Handelsblatt, Mass called on the EU to become “a cornerstone of the international order.”

Berlin’s increased interest in the UN coincides with Washington’s disengagement from the world body. This week, the U.S. officially pulled out of UNESCO, the UN’s educational, scientific and cultural agency. The Trump administration initiated the process of withdrawal in October 2017, slamming the organisation for its anti-Israel bias. Israeli Prime Minister Benjamin Netanyahu followed suit.

On Tuesday, the outgoing U.S. ambassador to the UN, Nikki Haley, reasserted her stance tweeting: “UNESCO is among the most corrupt and politically biased UN agencies.”

UNESCO is among the most corrupt and politically biased UN agencies. Today the U.S. withdrawal from this cesspool became official. #USStrong❤️????????

Many within the German establishment view the UN Security Council, created in 1945, as dominated by the victors of the Second World War. Germany, Europe’s economic power house, wants to be on an equal footing with other European powers, namely France and Britain.

“The Security Council is a product of the World War II,” German newspaper Rheinische Post complained earlier this year, “where the victorious powers secured specially powerful positions. With their outmoded veto powers, they can sabotage any initiative that they (or their allies) do not like.”

Germany, having failed to get a Security Council seat of its own, desperately wants a place at the table. With the EU seated at the Council, Germany can finally pursue its geopolitical interests and project its national power on the global stage under the guise of collective European leadership.

‘Euronews: Should the EU take France’s seat on the UN Security Council?

I was going to suggest that France donate their seat to the EU, but I like your idea so much better. I never did understand what France had done in WWII to warrant a permanent seat and veto power.

You are quite correct. It was a sop to de Gaulle.

I never did understand what France had done in WWII to warrant a permanent seat and veto power.

The postwar structure of Europe was smoke and mirrors. A strong Germany was needed to keep the Soviet Union out of western Europe, and a strong France was needed to keep Germany out. Neither of these countries was terribly strong after the war, so the next best thing was to pretend that they were strong. Dumb idea, maybe, but it worked pretty well.

While that was the ultimate decision with regard to the response to Stalin’s actions in what became the Warsaw Pact nations, it had nothing to do with France’s Permanent Seat on the Security Council. Nomadic100 is correct, in 1945 San Francisco it was a sop to DeGaulle to be named one of the “victorious allies” and given one of the five permanent seats on the Security Council.

A permanent seat on the Security Council is doled out by being one of the victorious allied nations in WW II. The PRC replace the RoC, otherwise there has been no change since 1945.

The United Nations is at the heart of the multilateral system…

Which is why someone needs to drive a stake through it.

Maybe the US should pull out, let this leftist, globalist organization go the way of the League of Nations, and the US prosper more by not having to contribute to the madness anymore.

Somehow, seeing how Germany has been operating, them being on Security while having open borders and pushing for open take over of their country and others, well, it shows how poor the UN is in their organization, and how useless it is as a world force.

It’s frightening to see how many leftists there are in charge of this world. This despite the fact that it is the right that brought prosperity and freedom.

Nope, not giving up the veto on the Security Council, even if we start ignoring totally whatever happens in the General Assembly. We could stop showing up there, or even rent out the GA floors of the UN building to some charitable organizations or use it as a community hospital.

A homeless shelter would be perfect

So a giant, non-democratic “government” wants a seat on the Security Council? Um. How about no?

The US under Trump seeks to disengage and hopefully dismantle this islamist dominated cesspool of corruption and jew haters known as UN, while Empress Palpatine seeks to usurp authority and dominate this cesspool.

The EU can have our seat, and we’ll leave the UN and all UN entangling organizations. The 5 permanent members will then be the EU, France, UK, Russia, China. But with the EU now having a seat, France and the UK are represented by the EU, so scratch them, leaving the EU, Russia, China. Two of these three are in Asia and since the EU borders Asia, the whole ugly UN business can move to some beautiful Islamic playground for their meetings, like Islamabad. Regardless, get out.

No, the EU cannot have our seat. We can still leave our entangling alliances and even stop sending our represntative to meetings of the General Assembly which is a lost cause anyway as long as every shithole country gets a full vote, but there is no way we’re giving up our permanent veto on the Security Council.

Let’s give the EU our seat and GET OUT.

Merkel is going down swinging for the fences. There is no way this is ever going happen. The EU is unraveling faster and faster and this is only going to make it worse. This is the new Iron Curtain falling over Europe, the culmination of Stalin’s vision of a “united” Europe.

A great observation. Many are unaware of the fact.

Aren’t France and the UK already permanent members of the Security Council? Me thinks Merkel is looking for her next position of power so she can stranglehold even more people.

Translation — No way Babe. You lost the war. We don’t need a 4th Reich.

Excellent point. The UN General Assembly could ask for a permanent seat, which is yet another Islamic controlled organization.

“The Security Council is a product of the World War II” is at least historically correct. It was created to address the failure of the League of Nations, which lacked any enforcement mechanism, from preventing World War II. And the victors had no intention to let that happen again.

The subtext: Germany continues to be remembered as the Nation of Auschwitz and, really, can’t we all just move on already? Along with Merkel’s sub-sub text of, “Didn’t we buy absolution by taking in all those refugees?”

So Merkel wants to put WW2 in the rearview mirror and get France’s seat for the EU which Germany controls.

Cool. Let France and Germany fight about this, both are bad governments now, and then if the result doesn’t look good, we’ll just veto it.

The U.N. means The United Nations. . The EU is not a nation.

The EU may not technically be a nation yet….

But it is seizing the authority to make over-riding internal and external “regulations” that they have successfully demanded the component nation-states enforce with their own police, courts, and jails.

When they have those separate police, courts, jails, and armies, air forces, navies, and border patrol not subject to any national authority, and remember that the EU has demanded that there should not be any border guards at all and France and Germany have pushed for the various armed forces be given to the EU with the host state paying but having no authority over those forces, they are only missing the police courts and jails of a nation. And even if they do not get those they can still be an occupying NGO like the Taliban.

Even if all that were a given, the “EU” was not a “victorious allied nation” in WW II and was not named one of the five permanent members of the Security Council in 1945. Other than giving the People’s Republic of China the Republic of China’s (i.e. Taiwan) seat, there has been no change in membership and any change would require either a highly unlikely change in government such as the PRC/RoC situation or a convention to re-negotiate the UN Charter (and that would be a nightmare).

the EU is not a country, but should they get a seat, the US should get 50 additional seat, one for each state, and the territories under US control.

Hell to the no.

That would give Europe 4 of 6 seats (Britain, France, the EU and Russia covers both Europe and Asia).

Germany trying to dictate to the world is how we wound up with a five seat security council. Germany can get stuffed.