“Jack Kerouac-style, he roams around, jobless (does he not need a job?) to find himself and figure out if he wants to lead the free world.” 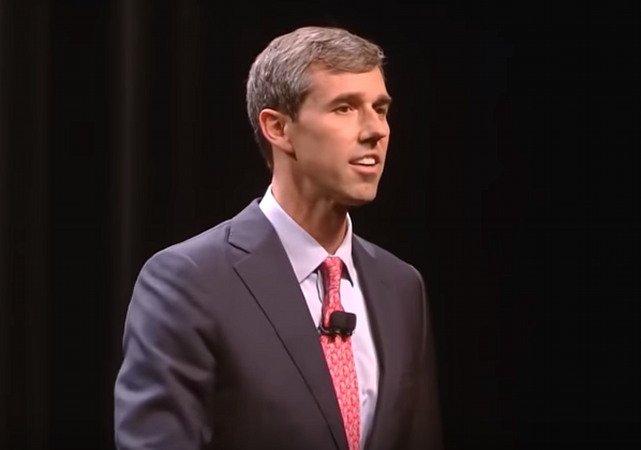 Beto O’Rourke hasn’t announced his candidacy for 2020 yet, but the folks at ‘Draft Beto’ have already released an ad, which I guess is supposed to get people excited for his inevitable run.

The ad is just like Beto, all style and no substance. It’s set to the classic song ‘Baba O’Riley’ by The Who, which will leave anyone under the age of 40 asking: Who?

Other than that, it’s just a montage of fast moving clips with a few quotes thrown in about our ‘polarized’ nation.

The Draft Beto people included this wording in their roll out of the ad:

Right now our nation is deeply divided and in desperate need of inspiration.

We need someone who can go anywhere, talk to anyone, and inspire everyone.

Beto O’Rourke is that person.

A whisper campaign has been growing about Beto being the ‘white Obama’ and it looks like his supporters are going with that, not that it will work.

If my analysis of Beto’s first steps seems a bit harsh, wait until you read this take from Nia-Malika Henderson of CNN:

Imagine this: A 46-year-old former congresswoman and mother of three, who just lost a Senate bid to one of the most despised incumbents, sets off on a road trip adventure to clear her head.

She instagrams part of her trip to the dentist. She gives a two-hour interview to The Washington Post where she shows no real knowledge of policy.

Like a first-year college student, she pontificates on whether the Constitution is still a thing that matters after all these many years.

And then she writes a stream of consciousness diary entry, where she is all in her sad and confused feelings, over … something:

Have been stuck lately. In and out of a funk. My last day of work was January 2nd. It’s been more than twenty years since I was last not working. Maybe if I get moving, on the road, meet people, learn about what’s going on where they live, have some adventure, go where I don’t know and I’m not known, it’ll clear my head, reset, I’ll think new thoughts, break out of the loops I’ve been stuck in…

O’Rourke, 46, we are told, is “Obama, but white,” because of his fundraising prowess — he raised nearly $80 million in his loss to Sen. Ted Cruz. He skateboards! He listens! He connects on the internet!

And Jack Kerouac-style, he roams around, jobless (does he not need a job?) to find himself and figure out if he wants to lead the free world. This is a luxury no woman or even minority in politics could ever have.

The 2020 Democratic primary is going to be brutal.

Is Beto the one we have been waiting for?

Perhaps, the “second moon”-ing of Arrakis

The second coming of The One?

A guy so intellectually vapid and clueless, he makes the odious and dim-witted Occasional-Cortex look like Isaac Newton, James Clerk Maxwell, Albert Einstein and Stephen Hawking, combined. Which is really saying something.

It’s set to the classic song ‘Baba O’Riley’ by The Who, which will leave anyone under the age of 40 asking: Who?

And anyone over the age of 60 asking: Why? Why ruin a perfectly good song?

It’s “Teenage Wasteland” for those who only heard it.

Another cryptic comment I had to go to Duck Duck for a meaning. Don’t think any more of the song by another name. Past 60 isn’t an issue, I’m more than a decade beyond that age. Taste in music seems to be the governing attribute to understanding (see my comment below).

And Jack Kerouac-style, he roams around, jobless (does he not need a job?) to find himself

No, he does not need a job. He’s filthy rich and has an even richer wife.

This guy is a grade A idiot. He has neither the attributes for, nor even a clue about being president. Hey Robert, how about Occluded-Cortex for your running mate? The “Dumb and Dumber” ticket.

Bottom of the barrel? They broke out the bottom and dug down a few hundred miles. Still didn’t find intelligent life.

As much as Barfo is trying to emulate Obummer, it’s more like:

Meet the new boss, same as the old boss …

That interview to the Washington Post just makes him look not just out of step, but an ’empty suit’.

Yeah, we won’t get fooled again.

I wonder how long after they “draft” him they figure out he’s 4F?

He claims to be 4F, but he can play golf

Janis Joplin “Me and Bobby McGee”

Sorta like another Democrat who ran for president going out of turn demanding an extra drag on the marijuana joint circulating between the members of the ‘Choom Gang’ in the ‘Choom Wagon’, or joining in the fun inhaling the last wisps of ‘Good Bud’ off the underside of the ‘Choom Wagon’ ceiling.
Wonder how the Democrats come up with these creeps?
How many times did Baracky Obammunist order Air Force One’s pilot to fly parabolic arcs so he could float up to AF1’s ceiling and do the same with the last wisps of ‘Good Bud’ he was smoking while airborne on his many trips.
Remember the First 2012 Presidential debate? Baracky Obammunist, obviously stoned, in his arrogance thought he could handle Romney stoned.
Wondering how, you say?
Overheard in the week after 2008 election: “He was young and looked cool, so I voted for him!”

Maybe this is an attempt to make Uncle Joe look good.

At least he has his wife’s money to fall back on when he fails.

Beto O’Rourke is lost. The former Democratic congressman, who unsuccessfully challenged Ted Cruz in last year’s election, has spent the last few weeks in a confused and melancholy state. Something possessed him to share images from a recent dental cleaning, perhaps the grossest introduction of a potential presidential candidate in the nation’s history.

They could if they had had the good sense to marry a billionaire’s kid, like Robert Francis did.

Vast wealth has its privileges (and it doesn’t care what color you are).

Being the heir of an existing local politician helps too. It can help get you into Congress and particularly helps with possible brushes with the law as a callow youth.

Why do Democrats hate people with actual accomplishments?

“ This is a luxury no woman or even minority in politics could ever have.”

Occasionally, it lands you a seat in the cortex of government, with whispers about you being the future.

I see what you did there

Can we stop with this ‘beto’ crap — it’s Robert. He fits perffectly into zerobama’s empty suit.

Thank you. Robert Francis O’Rourke, and a fine Irish Catholic name it is, as a matter of fact. I doubt many citizens of Hispanic origin/descent will be fooled. Can’t say the same for the Illegal Aliens who will be voting in CA and assorted other states with Illegal Aliens registered to vote via Motor Voter.

Maybe it’s just me, but from this picture it looks like it’s not only Obama’s empty suit that this Beta fits into, but also his skin. Look at the head – same nose, same jawline, same basic size and shape – he could be Obama in whiteface.

* Yes, I know how it’s spelled, this more appropriately describes the man.

I absolutely believe that all Dumb-o-crats seeking political office should be required to draft and submit professional experience résumés to the public. Really. Résumés listing their substantive private sector work experience (or, as is more likely the case, their pointed lack thereof).

For Dumb-o-crat “It”-girl, Occasional-Cortex, her last job under the “Experience” heading would be, “Bartender.” For a lifelong government apparatchik, such as comrade Sanders, or, Maxine Waters, their utter paucity of legitimate and substantive private sector accomplishment would become readily apparent.

True, many of the Dumb-o-crat voters don’t care that their politicians are people of little to non-existent private sector professional achievement. But, at least it would serve to emphasize to the rational people left in American society, what utterly worthless, superficial, self-aggrandizing, egotistical and self-serving twits, the Dumb-o-crat apparatchiks are.

The rational people left in the US don’t vote for Socialist-Democrats.

Hey, it worked for Bernie!

the comparison to kerouac is an insult to kerouac–o’rourke has zero artistic/literary ability, zero in the social visionary department, practically zero in the real-life experience department–lord, the list goes on

on the road was an amazing piece of work–though incomprehensible to many, it was still a rather vivid snapshot of the beat generation and their particular outlook/perspective on life in america at the time

o’rourke offers nothing and, quite frankly, has nothing TO offer

“…classic song ‘Baba O’Riley’ by The Who, which will leave anyone under the age of 40 asking: Who?”

I’ll admit I’ve never been a big fan of The Who, though I enjoy some of their hits. I kept confusing them with the Canadian Guess Who (and I’m not alone in that). Probably not unusual for someone who’s musical preference runs to “Classic” Country (AKA Before Garth Brooks). Anyway, I couldn’t say I had ever heard of that “classic” Baba O’Riley and had to go check it out. Now I can honestly say that I never had heard it before and have heard part of it for the first time, and won’t bother to look it up again.