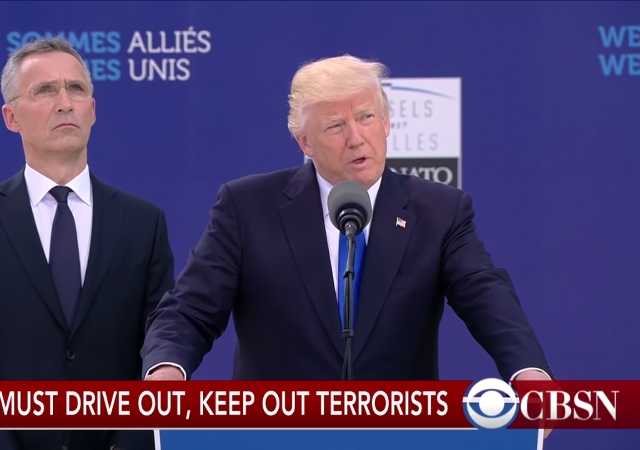 In what can only be described as another foreign policy win for President Donald Trump, the European countries are ‘tiptoeing’ towards Washington’s position on Iran, Reuters reported Friday. Describing the recent shift in European diplomacy, the news agency noted that the “new approach moves Europe closer to U.S. President Donald Trump’s policy of isolating Iran with tough sanctions.”

“We thought we could get some effort from the Iranians in several areas,” a European diplomat told Reuters, citing Tehran’s ballistic missile program and acts of terrorism on European soil. “There’s a feeling of frustration among Britain, France and Germany, and others, after the first phase of diplomacy with Iran.”

Referring to a meeting between top Iranian officials and European envoys on January 8, Reuters disclosed that Iranian representatives “abruptly stood up, walked out and slammed the door in an extraordinary break with protocol.” Adding that the “French, British, German, Danish, Dutch, and Belgian diplomats in the Iranian foreign ministry room had incensed the officials with a message that Europe could no longer tolerate ballistic missile tests in Iran and assassination plots on European soil, according to four EU diplomats.”

Following the breakdown of these talks, Brussels imposed sanctions against Iran. The move came after the Dutch authorities accused Iran of carrying out at least four assassination and bomb plots on European soil. The sanctions, mostly symbolic in nature, will target the regime’s Islamic Revolutionary Guard, ministry of intelligence, and a few senior officials.

The sanctions [imposed on January 8] were largely symbolic but the stormy meeting encapsulated the unexpected shift in European diplomacy since the end of last year. Smaller, more dovish EU countries have joined France and Britain in a harder stance on Tehran, including considering new economic sanctions, diplomats say.

The new approach moves Europe closer to U.S. President Donald Trump’s policy of isolating Iran with tough sanctions even though European governments still support the 2015 Vienna deal from which he withdrew in May.

Although there are diverging views in Europe, the shift could have consequences for President Hassan Rouhani’s government as it looks to European capitals to salvage that deal. (…)

Iran’s firing of short-range ballistic missiles into Syria on Sept. 30, missile tests and a satellite launch this month have niggled Western powers.

For Europe, alleged assassination plots by Iran on French and Danish soil in 2018 were the last straw, diplomats say.

Tehran denies the plots and says the missile tests are purely defensive.

“The accusations against Iran over the past few months have awoken a few countries in Europe that were against a tougher line on Iran,” a European-based Middle East diplomat said.

The same day as the meeting, the Netherlands publicly blamed Iran for killings on its soil in 2015 and 2017. Tehran denies any involvement. Then on Jan. 9, the EU designated a unit of Iran’s intelligence ministry a terrorist organisation, froze its assets and those of two men.

“Take the Dutch for example. They had kept very quiet until the Danish attack and now they are more hawkish than the French,” said the diplomat.

Alarmed by Trump’s “America First” policy, Europe considered his May 8 decision to pull out of the Iran accord a severe setback but Iran’s international ambitions appear to offer Brussels and Washington a chance to work more closely.

A U.S. State Department official said there was now “a growing international consensus” on the range of Iranian threats.

Tehran’s growing frustration is linked to the failure of the European countries, mainly Germany and France, to bankroll the flagging Iranian economy in the wake of U.S. economic sanctions. The much-promised EU initiative to bypass Washington’s sanctions by setting up a non-dollar trading mechanism, or the Special Purpose Vehicle (SPV), has failed to get on its feet. In November, Austria became the latest EU country to refuse the hosting of the SPV on its soil. Hopes of running the dubious scheme from the tiny duchy of Luxembourg haven’t materialized either.

Despite repeated assurances made by German Chancellor Angela Merkel and the EU foreign policy chief Federica Mogherini, European companies and banks, fearful of U.S. response, are pulling out of Iran in droves. “Anyone doing business with Iran will NOT be doing business with the United States,” the President Trump warned in August.

The Iranian regime seems to have long given up on European promises. In August, Iran’s so-called ‘Supreme Leader’ Ayatollah Ali Khamenei admitted that the EU countries cannot save the Obama-era deal. Referring to the European leaders, he told the government to “give up hope on them over economic issues or the nuclear deal.”

Iran has also been irked by the latest U.S. move to put the spotlight on the regime’s jihad sponsoring activities. The U.S. and Poland are jointly holding a summit on Iran and Middle East. The Warsaw conference in mid-February will focus on, among other things, Iran’s sponsoring of terrorism across the region. The talks include “an important element of making sure that Iran is not a destabilizing influence,” Secretary of State Mike Pompeo said.

Poland rejected Iran’s objection. The country’s foreign ministry said that “the international community has the right to discuss various regional and global issues, and Poland [has the right] to co-organize a conference whose goal is to develop a platform for actions promoting stability and prosperity in the Middle East region.”

Gradually but surely, many in Europe are coming to see the merits of Trump’s foreign policy. Politico is right in its assessment that the U.S. president is ‘splitting’ the EU — and not just on the issue of Iran. Washington’s bold step to pull out of the UN migrant pact emboldened seven EU country’s to defy Brussels on the issue.

Even the German state media, otherwise outspokenly critical of the Trump presidency, acknowledged the U.S. president’s impact on the world stage. “Remember the hope that Donald Trump would be mostly tough talk, but little action?” Deutsche Welle asked on Friday. “At the halfway-mark of his first term it is time to acknowledge the huge impact he’s already had — and wonder how much more could come.”

The public broadcaster, besides its usual litany of anti-Trump insults, grudgingly admitted that Trump’s “first two years in office have proven that he really is an outlier among American presidents.”

Despite the welcome shift in European foreign policy, one should not pin too much hope when it comes to the broader picture. The EU, entrenched in its globalist outlook, holds much sway over European policy making process. Common sense and national interest are foreign concepts to the ruling ideologues in Brussels.

Trump: ‘Iran is different place than before I was president’

Recent Iranian diplomats have been charged with facilitating terrorism in Europe might have changed their minds to align more with Trump.

Mogherini replaced Baroness Catherine Ashton as head of the EU FM – both of them communists.

While in Davos, Obama granted Ashton plenipotentiary power to negotiate a “no-paper” nuclear arms deal with Iran’s FM Zariff on America’s behalf. This was the famous ‘one-on-one’ P 5+1 meeting that was approved by Russia, China, France, US, UK PLUS Germany. Imagine that. Every one of those entities approved of Ashton speaking on their behalf. Of course the minutes of this very special one-on-one meeting have never been released. Transparency!