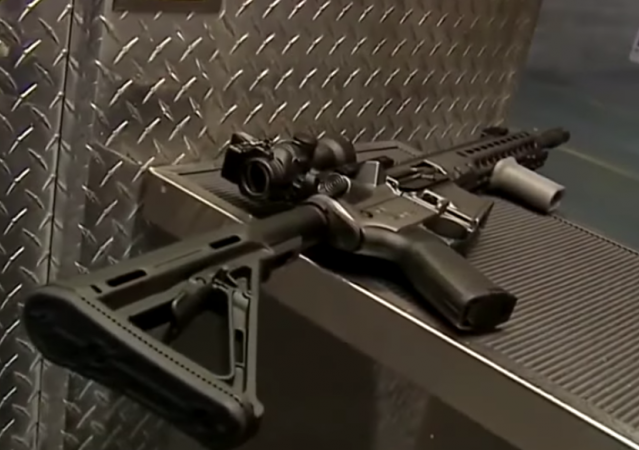 The insurrection is alive and well in Boulder, Colorado where ‘gun-toting hippies’ (many of who are liberal) are refusing to comply with a new city ordinance that bans “assault weapons.”

In a city with a population just over 100,000, only 342 guns were ‘certified’ by Boulder police before year end.

The Washington Times has more:

Only 342 “assault weapons,” or semiautomatic rifles, were certified by Boulder police before the Dec. 31 deadline, meaning there could be thousands of residents in the scenic university town of 107,000 in violation of the sweeping gun-control ordinance.

“I would say the majority of people I’ve talked to just aren’t complying because most people see this as a registry,” said Lesley Hollywood, executive director of the Colorado Second Amendment group Rally for Our Rights. “Boulder actually has a very strong firearms community.”

The ordinance, approved by the city council unanimously, banned the possession and sale of “assault weapons,” defined as semiautomatic rifles with a pistol grip, folding stock, or ability to accept a detachable magazine. Semiautomatic pistols and shotguns are also included.

Current owners were given until the end of the year to choose one of two options: Get rid of their semiautomatics by moving them out of town, disabling them, or turning them over to police — or apply for a certificate with the Boulder Police Department, a process that includes a firearm inspection, background check and $20 fee.

Judging by the numbers, however, most Boulder firearms owners have chosen to do none of the above, albeit quietly.

“The firearms community in Boulder — they may be Democrats but they love their firearms,” said Ms. Hollywood, herself a former Boulder resident.

One longtime Boulderite who has openly refused to comply is Jon Caldara, president of the free-market Independence Institute, who writes a column for the Denver Post and hosts the public-affairs show “Devil’s Advocate” on Colorado Public Television.

“The question was, do I do this publicly or do it privately, and I’ve chosen to do it publicly because somebody has to,” Mr. Caldara said. “There will be thousands of people in Boulder living in the shadows, worried about somebody turning them in.”

What made him decide to take one for the team was the specter of the tolerance-espousing Boulder City Council cracking down on a maligned minority, namely gun owners.

“In this town that spouts tolerance for alternative lifestyles, that actually puts posters all over its buildings and schools about it, when it comes to a lifestyle they don’t like, there is no tolerance,” Mr. Caldara said. “So for me, this all works around the word tolerance. And tolerance means tolerating things you dislike, that you find scary.”

A few months ago, the ordinance was challenged in federal court:

…most people see this as a registry

Firing ranges are always packed out here. And gun stores have become much bigger and numerous. Gunsmiths have dwindled but it sure seems like everyone out here who doesn’t live in Santa Monica or other radical towns owns a gun. They even advertise on radio.

They can’t gerrymander gun attitudes the way they do voting. The right to own guns simply isn’t a partisan issue anywhere. Look at radically liberal New Jersey where they just banned extended magazines and no one has yet turned one in. It’s a bad law that will not be enforced. Americans are very serious about the 2nd amendment. Even liberals.

Perhaps the hardware is irrelevant, and they just love their civil rights.

Civil disobedience is a wonderful sight to behold. NY’s Safe law has had similar compliance rates, and NJ’s recent >10 magazine ban had, at last check, exactly 0 magazines turned in. Dems ignore the laws they want to (sanctuary cities); gun owners have the added argument of ‘shall not be infringed’ to support their claim.

Ultimately, it is up to the citizenry to defend and uphold the constitution. Our founding principles specifically state that we have a right to replace our government when it tramples our God-given rights. Our constitution does not limit that right to the ballot box. That is why the 2nd amendment is there, to protect the 1st on the way to the rest of our rights.

A serious question for the lawyers here. How can a state or locality infringe, modify or amend a Federal Constitutional right? The Supremes have opined that since immigration is the constitutional prerogative of the federal government the states may not adopt their own immigration laws. The right to keep and bear arms is in the US Constitution and I would think therefore be subjected to the same restrictions. Could each state have its individual restriction on the practice of religion or require residents to certify their Bibles or Korans or require members of the press to undergo a background check? Just wondering!

Your digression about immigration is irrelevant. Just forget that whole piece.

The answer to your question is that the Bill of Rights did not originally apply to the states, so originally states could ban guns, newspapers, religions, whatever they liked, but the 14th amendment requires states to respect people’s basic rights, and in McDonald the Supreme Court ruled that this includes the right to keep and bear arms. So how can Boulder (and California) do this? Because so far the courts have held that this ban and those like it are consistent with the 2nd amendment, and the Supreme Court has refused to hear any challenges to that holding; if it ever does, and rules otherwise, then these bans will automatically become void.

“Tolerance” is a tool not a philosophy to a leftist. It is used to control their enemies. Now, they have to enforce the ordinance or repeal it. This will be interesting.

Democrats in NM are getting ready to board the stupid train and enact gun control legislation. I’m pretty sure it’s not going to work out they way they think it will. The general consensus seems to be… pass whatever laws you want. We’ll ignore them just like we do every other stupid law and regulation that comes out of the Roundhouse.

Common sense gun control: “Don’t worry, we’re only banning ‘assault weapons’…and by the way, semi-automatic shotguns & handguns are covered as well.” So the Remington 1100 that I use for dove hunting or duck hunting, that’s an ‘assault weapon’? Does my Garand have a “pistol grip”? Does its ‘en bloc’ clip count as a ‘detachable magazine’? Is a double-action revolver a semi-automatic?

The Devil is in the details. These laws are invariably drafted and promoted by those who are least qualified to define a class of firearms.

There’s no way to rule innocent men. The only power any government has is the power to crack down on criminals. Well, when there aren’t enough criminals, one makes them. One declares so many things to be a crime that it becomes impossible for men to live without breaking laws.

Citizen [raising his hand]: “By enacting this ordinance, you’re going to convert a good portion of the citizens of Boulder into criminals.”

Boulder City Council: “So what? They’re gun owners; we don’t like them anyway.”

That’s how the game is played.

It’s Déjà vu all over again:

When New York enacted the NY SAFE act in 2013, it was estimated that 1 Million ‘assault weapons’ would be registered. In reality, roughly 44k were registered.

And like Boulder, CO, “several dozen rifles are considered assault weapons, along with a handful of shotguns and even some handguns.”

The main issue with these kinds of feel-good laws is that they can enforce them whenever they want to. So if you are a conservative pol in CO and they catch you target shooting your AR they can then prosecute you legally. This is like the Logan act that has never been used against anyone except when Sally Yates brought it up against Gen Flynn. If such an arrest is made then it will have to go all the way to the SCOTUS to be resolved.

I live in a county adjacent to Boulder County. With the total takeover of the state legislature by dems and the statehouse by the quite radical baby-Brown, Jared Polis, I fully expect this type of anti-2A and anti-law abiding citizen legislation to be introduced in Denver in the very near future.