“I decided i was going to start prosecuting parents for truancy.” 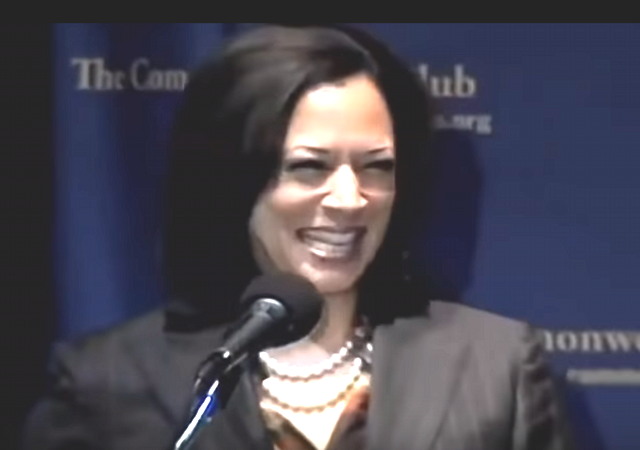 She actually smiles as she describes threatening to jail parents if they don’t get their children to school.

Michael Graham writes at Inside Sources:

While Sen. Kamala Harris (D-CA) was talking to CNN’s Jake Tapper Monday night about her 2020 POTUS bid, hundreds of thousands of people were on Twitter watching a speech the former California D.A. and attorney general gave back in 2010. In the speech, Harris brags about threatening parents with prosecution–and possible jail time–over their children’s skipping school.

“I believe a child growing without an education is tantamount to a crime,” Harris told the crowd at the Commonwealth Club in San Francisco. “So I decided i was going to start prosecuting parents for truancy.”

“As a prosecutor in law enforcement, I have huge stick. The school district as a carrot. Let’s work together in tandem…to get those kids in school,” Harris said. She also bragged about the power of her D.A. office letterhead–with a large police badge logo at the top– to frighten parents and families when they received her letter outlining the possible legal consequences of truancy.

That sounds a bit authoritarian, doesn’t it?

Maybe there’s something in the water out here in Indian Wells, but am I soft on crime if I think a situation of a student’s chronic truancy probably needs a social worker, and not the state AG or local DA threatening to put the parents in jail? How much teen truancy occurs with parental consent? How many parents of truant kids are dealing with some other significant issue — drug use, an absent parent, financial pressures, unusual working hours, or some other complication that enables the truancy? In the above video, Harris gleefully tells a story of a parent “freaking out” upon receiving the letter announcing the policy. Does that . . . sound like reassuring law-enforcement judgment to you?

In another clip from the same speech, she describes how going after a working but homeless mother in this way, led to a happy ending for all involved:

Kamala Harris continued on to describe how she’d brought charges against a single homeless mother of 3 who was working 2 jobs because her children were truant…and this was a success story. pic.twitter.com/FT5uJmI6x9

Imagine an America where this woman is in charge of the IRS and government-run healthcare.

It’s going to be fun to watch the people who have spent two years calling Trump a fascist, somehow justify Kamala Harris using threats of jail to solve a problem like school attendance.

If you don’t take your child’s education seriously, it’s off to the reeducation camp for you? Seriously?

I don’t see anything wrong with this honestly.

Can you imagine what it’s like for kids in bad neighborhoods to face those things on a magnified scale everyday in an environment that is rife with low expectations and malaise? I’d probably find other things to do with my time too.

(and yes, I was a goodytwoshoes who always thought school was wonderful, grew up to be a teacher and then figured out what a horrible travesty our public schools really are)

2. There are a lot worse places.

1. You are a fool. Nothing personal. I once was a fool on this issue too.
2. I hope you don’t have children.

Just for reference, how long has it been since you’ve a couple of days at a public high school in a large urban area, say one with 3 to 4000 students?

in theory, healthguy, I also do not have a problem with holding parents responsible for making sure their children are attending school. the problem is that children will do what they want, no matter what the parents say.
And parents are very restricted in how they can enforce house rules: Take away the kids phone, your ex (who bought the phone) accuses you of theft. Spankings? CPS visit. grounding? is the parent even home to enforce this?
What parents even see their kids? the bus comes here for the kids starting at 6:30, and does not drop them off again until almost 4. parents get home from work at 6. Add in any sports or after school day care…. parents are not raising their children in this society.

I agree. There are parents that my school won’t go after because it either won’t be of any use or it is just piling on to an already terrible circumstance. The admin isn’t going to force a single mother working two jobs into court for truancy. The vast majority of truancy cases we see (Rural Louisiana) are cases I see as pretty odd. One parent was taken to court because she was just letting her daughter stay home an extra 70 or so days a year. One parent pulled their kid for the entirety rifle season last year. One parent routinely checked her kid out of school for routine cleaning chores like vacuuming/dishes. It is an area that requires sound judgment and a board with the spine to stand behind a principle that makes sound decisions. Both seem to be fairly uncommon.

This was the approach of DA’s offices throughout California. As with all things government, it’s all about the money. If the schools cannot get butts in the seats, then they lose funding. So special truancy units were created and funded with grant money. And to heck with real crime.

In theory, your idea of “the law must be enforced” is just swell. The reality was something quite ugly.

Well, you need to do something to interrupt the school-to-prison pipeline and cut down on the number of super-predators out there, amirite progs?

If Hillary laughing about getting a child rapist off didn’t move the needle, this is nothing. She climbed the ladder on her back and nobody cares. Democrats have no shame.

The State AG has nothing better to do?

For the fascist left, this is a feature rather than a bug.

Sounds like a corollary to the “broken windows” theory of law enforcement, which has proven to work wonders everywhere its tried. Why not apply the same strict approach to immigration laws?

Here’s where we are: she thinks its a good idea to jail parents of kids who cut school, but when it comes to gang-bangers killing SFPD police officer Isaac Espinosa, she declines to put the death penalty on the table for the killer.

Note to Human American: she was the SF DA at the time of the truant statement, still “working under” Mayor Willie Brown.

This is going to be an interesting election.

The State AG has nothing better to do

In Massachusetts, the law hasn’t been updated in a long time – maximum penalty is something like a $20 fine, if the same is true in CA this is surely a good use of government resources.