Will Senate Democrats shut the government to prevent Trump from getting his wall?

Will Senate Democrats shut the government to prevent Trump from getting his wall?

It’s not about the $5 billion for border security in the bill the House passed tonight. It’s about Democrats wanting to break Trump. 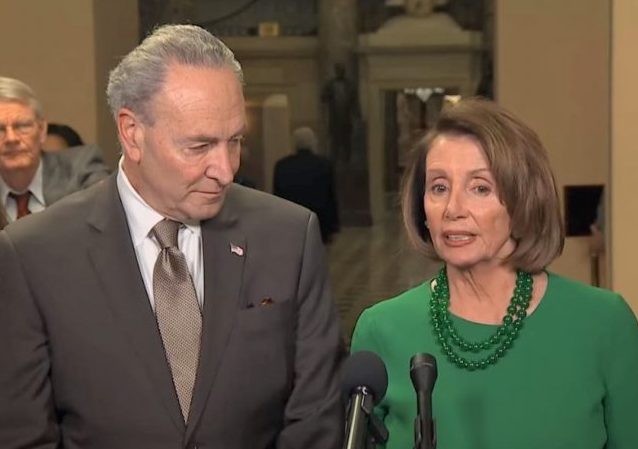 The fight over the wall isn’t about the wall.

It’s about open borders and whether Trump can withstand the conniving of Democrats AND Republicans in D.C.

It’s also about Democrats hope to hand Trump a “read my lips” moment that will alienate his supporters and damage enthusiasm for 2020.

Trump seemed ready to capitulate, but at the last minute pulled back after howls of criticism that agreeing to a ‘stopgap’ spending bill that did not include the $5 billion he wanted for border security would doom his presidency.

Trump then pulled back, and said he would not sign the spending bill that passed the Senate.

So the House just passed a bill that included $5 billion for border security. But Democrats in the Senate appear ready to vote against it, so there will not be 60 votes.

Pelosi and Schumer characterize it as Trump shutting down the government.

$5 billion in the world of federal spending is small. It’s not about $5 billion. It’s about Democrats wanting to break Trump.

Rino pols in the House love a dominatrix….apparently.

I’m crediting Brian Kolfage and his Fund the Wall idea. I think a lot of squishes suddenly got worried about optics.

Yes, the GoFundMe was at 4 million this morning and now it’s over $9 million. My gosh, it goes up by the tens of thousands every few minutes!!!

I’m not familiar with the arcane rules concerning budget reconciliation bills, but as I understand, they only require 51 votes in the Senate, which is how OBAMACARE GOT PASSED.

If the dems can twist process, so can we.

Besides, the constitution doesn’t provide a 60 vote requirement. If Mitch can forget he doesn’t mind losing, he’d change the damn rule anyway.

Okay, I could be wrong. Ocare could have gotten 60 votes, I’m trying to remember. I remember sending Scott Brown in Mass. money so he would prevent them from having 60 votes.

That certainly, but also for continuing the pipeline of future Democrats voters and grifters.

And keep in mind the distorting effect on apportionment that millions of illegal aliens supply. California, our own open air insane asylum, has more than 4 electoral votes directly due to illegal aliens, which is why the Democrats are so hysterical about a simple question regarding citizenship on the 2020 Census–they believe it will cause illegal aliens to not respond.

Was listening to CSPAN tonight. Wow, the Dems sure have done a good job about talking points.

I recommend Trump blast them between the eyes. He should say, well gee, I would not going to veto the bill but because of the personal attacks about golfing being more important and tweeter tramtum, I would like to get the focus back to what the funding is going for. Something to stop the flow of drug that accounts for hundreds of death monthly an gangs terrorizing the communities that don’t have the protection like Chucky and Nancy do at their house.

I also remind everyone what Chucky and Nancy’s previous positions were before. Their fake outrage is so transparent. Look closely to see that they really do not care about this country.

sorry about the grammar

The message is what counts, I get it, and like it.

What really worries me is that I don’t know what is wrong with your grammar.

Haha
Lolo
Thanks for the chuckle.

The repubs need to be playing video clips of Schumer, Pelosi, both Clintons, 0 supporting border security and warning of illegal immigration.
D Barbara Jordan’s 1995 speech is especially good (plays on OAN but is on Youtube).

President Trump knows how to stop the flow of Drugs.

Drug Prohibition is socialism for criminals. Says Milton Friedman. Besides we learned that from Alcohol Prohibition.

I guess this is fair game here. In the CSPAN interview of Chucky and Nancy, they were whining about Mattas. Should be by the time Mattas leaves he will have served about the same amount of time that two of Obama’s Def. Sec. did. You would think it is the end of the world…..read his letter, read his letter. Oh My, what drama queens.

When this topic comes up, I would remind them of Robert S. McNamara and his program of getting 80%er’s drafted for Vietnam, aka Project 100,000.

I have recently read McNamara’s Folly: The Use of Low-IQ Troops in the Vietnam War by Hamilton Gregory and am currently reading The Diversity Delusion: How Race and Gender Pandering Corrupt the University and Undermine Our Culture by Heather Mac Donald so I hold the understanding that Project 100,000 was not actually ended but instead expanded throughout the US Govt. and K-Uni education in America.

The guy’s been outmaneuvering the political pros for three years now, but suddenly went all squishy; then had a miraculous epiphany and remembered that he’s the guy with the veto power.

This doesn’t strike me as a very plausible theory.

May Pelosi asphyxiate of her own vomit.

What we face here is not the inability to get the funding through the House (although Ryan is kicking and screaming), but the Senate due to filibuster rules, from what I understand.

When Ryan gets the modified spending bill done and sends it to the Senate, McConnell should (hopefully) put it to the floor and let the Democrats filibuster it, on the floor, 24/7/365, every single minute of every single day, without pause. Every time the Dems open their mouths, another vote will slip away from them in the elections.

And we get the wall.

I understand the bill is combined with hurricane relief funding.

What’s the Christmas season without another session of Congressional kabuki theater?

Well it surely is too much to expect them to get all the budget bills marked up, voted out of the appropriate committee and to the floor for a vote in only a year. There’s Fridays for travel back home (or is that Tnursday?) and Monday to travel back to DC each week. That doesn’t leave a lot of time to work on bills. Then there’s Spring, Summer, Fall and Winter vacation, and Federal Holidays making for extra long weekends at home. Why there’s barely 100 working days in a year, how could they possibly get all those funding bills done in that little time?

That’s how I see this too. If Congress hadn’t abandoned the normal budget process 20 years ago, we wouldn’t be having these continuing resolutions in lieu of a formal budget. Back then, the challenge would have been to make sure that the budgeted border wall funding survived the appropriations process.

I don’t know how this works today. Is their an appropriations process anymore? If so, that would mean that the $5B included in the “budget” could be killed by not appropriating it next year when the Democrats take over the House. What a snake pit.

Airing of grievances and all that.

The fact that McTurtle brought a vote to the floor that didn’t contain border wall funding and it passed is damning. To him and his fellow RINOs. Too bad the Trump campaign and the RNC merged. I’m never donating to the GOP at large. Guess Trump won’t get any of my money either.

1) What about having the military build the wall?

2) Time to start squeezing 20-30 billion out of money transfers to Mexico.

3) Time to start using asset forfeiture on illegals or anyone giving any aid and comfort to illegals.

It seems he is drawing the dems out to get them into a corner.

let’s see how the smartest man in DC plays this one.

smartest troll which is currently a good thing

Flake will sell out.

I thought he, and Corker, had already left and is just collecting a check without any work now.

Work now??? When did Flake do any work as a republican??Just askin!!!

It will be interesting if they pull it off with the Congressional Budget Act. The dems used it to get Obamacare passed. It would mean Trump beat them at their own game using their rules. I hope it works. The fact the house tacked on relief aid make the dems even look worst to oppose it.

The media is screaming that the poor government workers will not be getting paid, which is BS, they have gotten paid for not working every time. It is just delayed. Only the government contractors are the ones not getting paid.

Man, I wish the media could be held accountable for their spin.

I believe current actions by the Fed are also intended to break Trump. The last couple of weeks have been horrible for my stock holdings, and millions more like me have been affected by it. It’s not just about hurting Trump personally, but hurting his fans and forcing an economic downturn to halt the economic gains made since his inauguration. If the Fed can keep tightening the screws the Democrats can use the economic effects as ammunition against Trump being reelected.

Seriously. Just read more Sun Tzu. I know lots of people want to see Nancy and Chuck dancing on Trump’s grave, and the impression Ann Coulter bludgeoned Trump into having a spine, and the shocking reversal of events that followed, as some sort of… coincidence, happenstance, or some random act of madness… but like any magician’s trick, it’s simple when you understand the methodology.

If Sun Tzu is too opaque, Scott Adams will do in a pinch.

Its about the Democrats and RINO’s (I repeat myself) having backed themselves against a brick wall these last two years.

So the question is…does the Senate have to vote on that this year OR can it wait until the new senate comes in in January?

Those congresscritters see constituents putting their money where their mouths are… Literally, by donating to that gofundme wall account. They don’t listen to tweets, emails, and phone calls, they listen to $$$$

Amwick, I upvoted you, but you’re incorrect: phone calls and letters/emails make a BIG difference.

Congresses have two sessions, one per year. New Congress starts next month. All unpassed legislation dies at the end of a congress. Next Congress, of course, will have a majority of Democrats in the House, but more Republicans in the Senate.

Bruce, thanks for that.

So Corker has gone missing in action already. Flake is a no. Plus those other Democrats starting with R will vote no (if they even bother turning up that is).

So this seems nothing more than Ryan inspired bukakke theatre with no chance of being passed. Pity this wasn’t don’t a year ago (but then, why would the Democrats and the Rino Democrats do anything to protect Americans to start with?).

Which means nothing the Democrats don’t want passed will escape the House.

All branches of govt Republican. What’s the problem to pass anything a Republican President wants?

60 votes for cloture? Neither Paul Ryan or McConnell being particularly desirous of stopping the flow of Illegal Aliens?

The Republicant’s are once more demonstrating that they cannot govern even with a majority in both houses.

More likely than not they will. And if it is a near run thing, Flake and Corker will rush back to cast their “Nay” votes in support of Schmuck Schumer,.

This has been a public service announcement from the Socialist/Democratic Party.