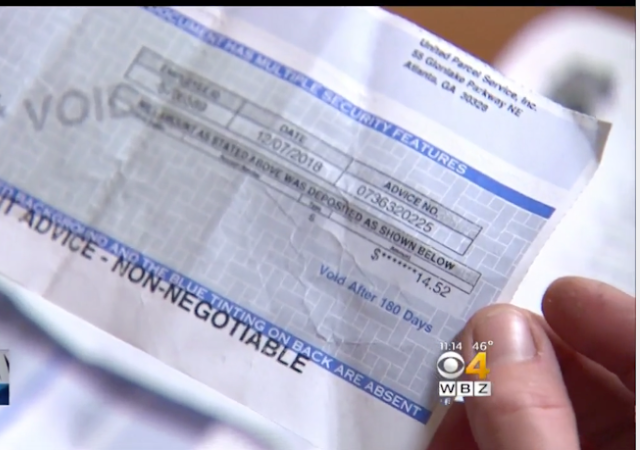 CBS Boston reported that many seasonal UPS workers experienced shock when they received their paycheck because unions took the majority of the money:

Sheila O’Malley of Charlestown couldn’t believe it when she opened her paycheck from her seasonal job at UPS. “I was shocked,” she told the I-Team. She worked 41 hours that week, many of them during the overnight, and ended up with just $14.52.

Sheila assumed it was a mistake and the money would be refunded. In part, because Sheila, like other thousands of other seasonal part time UPS workers, signed an agreement to pay the $500 Teamsters union initiation fee in $32.00 weekly installments. But UPS told her it wasn’t a mistake. A spokesperson for UPS told the I-Team, “Local 25 reversed this long standing practice by rescinding this policy.”

For the new hires, that meant the balance of the union initiation fees and dues would be deducted in one lump sum. For Sheila, that was $490.00- nearly her entire week’s pay.

“I cried and tried to plead my case with them. But there was no wiggle room. He [union representative] said ‘You’re a part of the union now and you won’t have to worry about that coming out of your check,’” she said.

Some employees tell WBZ the union blamed UPS for what happened. But all of this finger pointing doesn’t matter to Sheila and the thousands of others who were left with little or no money.

“Financially it was crippling. It seemed like a few hundred dollars but that money was already spent and then we didn’t have it,” she said.

The I-Team has learned the National Labor Relations Board is now investigating charges of unfair labor practices against the Teamsters Local 25.

I think I’ve divined the root of your problem.

Already spent could also mean budgeted and now their budget has to be revamped and plans changed. But it is always better to make assumptions and be superior.

What’s most important to union is the money they force their members to pay. Pass a federal law that makes all the states right to work states.

I had the same thing happen to me 30+ years ago when I worked for a grocery store for the summer. I got a paycheck for less than $5 because the UFCW extracted their “initiation fee”. Then the f-ing union steward came in and told the store to cut my hours because I had worked too many hours the previous week (regular employees were on vacation or wouldn’t come in on call and I was willing to be in the store in ten minutes). I’ll never see that money again. Was nice that I had to pay taxes on it, too.

Teamsters take that money up front because seasonal employees might just quit before they get their cut.

But don’t forget, unions are all about the worker. Good thing they’ve got your back.

I have always refused to live anywhere that is friendly to unions.

Unions have long outlived their useful life. They are nothing more than an arm of the Dumbacrat party.

Never forget, unions are all about the union bosses and DNC,they have to have income from some source now don’t they.

im a retired teamster and i find this disgusting.

teamsters backed reagan but that was only because carter deregulated trucking industry causing many union companies to fold. now they are happily in the laps of democrats. more free stuff.

Seriously, why would a union need an initiation fee in the first place if everyone was required to join and pay a percentage of their wages?

I worked for UPS many years ago and was forced to join the Teamsters. I learned that life lesson and never forgot it.

I suspect the Dems already have the press release out saying Trump did this or this is Bush’s fault. OAC is getting the Congressional subpoenas ready. Or, maybe the Dems will remain silent as they cash the checks.

I’ve had run-ins with Local 25. They like to stick their noses in NH politics. At a rally outside a candidates debate, we had a chat with one of their organizers who let on that they were socialists – he came out and said it. “In the end, we will live in a socialist world, and Local 25 will lead the charge.”

Some of them had to be disarmed from their baseball bats and crowbars from the crowd by local police.

The attitude then reminds me of antifa now, just without the masks.

The Union’s past laurels are now irrelevant. They ARE the Evil that plagues workers.