Did Kamala Harris and Mazie Hirono just use a “religious test” challenge a judicial nominee? 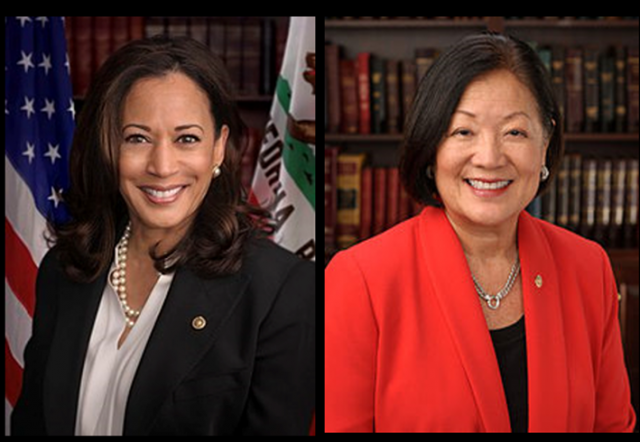 As a Catholic woman, I am very familiar with the faith-based, charity activities organized by our parish’s Knights of Columbus group.

I must have missed the memo saying it was a chauvinist, religious cabal intent on creating a pontifical version of “A Handmaid’s Tale”. It’s a good thing US senators Kamala Harris (D-Calif.) and Mazie Hirono (D-Hawaii) are on top of things.

These two grande dames of Congress recently raised concerns about Omaha-based lawyer Brian Buescher’s membership in the Knights of Columbus as part of the Senate Judiciary Committee’s review of his nomination by President Dondalt Trump for a position in the the U.S. District Court in Nebraska.

“The Knights of Columbus has taken a number of extreme positions,” Hirono said in the questionnaire. “For example, it was reportedly one of the top contributors to California’s Proposition 8 campaign to ban same-sex marriage.”

…Harris, in her questions to the nominee, called the Knights of Columbus “an all-male society” and asked the Nebraska lawyer if he was aware that the group was anti-abortion and anti-gay marriage when he joined. The California senator also referenced Supreme Knight Carl A. Anderson’s statement that abortion amounted to “the killing of the innocent on a massive scale” and asked Buescher if he agreed with the statement.

Buescher responded that his involvement in the group consisted mostly of charitable work and community events at his local Catholic parish. He indicated he would abide by judicial precedent regarding abortion.

Buescher responded with dignity and decorum in his written reply to these queries. He indicated that the organization’s official positions on issues do not represent those of the individual members and said he would recuse himself from hearing cases where he saw a conflict of interest.

The full suite of questions from the Senate Democrats makes for fascinating reading. Assuming 44% of Catholics are members of the Democratic Party, I think the following inquiry from Harris should be featured during the presidential campaign should she run…by one of her opponents.

a. Were you aware that the Knights of Columbus opposed a woman’s right to choose when you joined the organization.

In short, it’s plain that the new “religious test is”: Are you now or have you ever been a member of the Knights of Columbus?

Many Americans are angry at the line of questioning.

Kathleen Blomquist, spokesperson for the Knights of Columbus, told CNA [Catholic News Agency] that the senators’ questions echoed the kind of anti-Catholicism seen in previous generations of American history.

“Our country’s sad history of anti-Catholic bigotry contributed to the founding of the Knights of Columbus, and we are proud of the many Catholics who overcame this hurdle to contribute so greatly to our country,” Blomquist told CNA

“We were extremely disappointed to see that one’s commitment to Catholic principles through membership in the Knights of Columbus—a charitable organization that adheres to and promotes Catholic teachings—would be viewed as a disqualifier from public service in this day and age.”

Judicial nominee faces Senate scrutiny over Knights of Columbus membership. This is blatant religious bigotry. Shame on you Senator Harris. This is ugly and disgusting behavior for someone entrusted with the protection of the 1st Amendment. https://t.co/uGxKwyfvCL

Others put Harris’ and Hirono’s line of questioning into its proper perspective.

Yeah, the Knights of Columbus are a real threat to our Republic. Here they come in their armored personnel carrier!

[Maybe Sen Harris (D-Panem) could dial it back a bit.] pic.twitter.com/snAtvF8DjN

Sadly, the liberal progressives would prefer that their judges belong to the Communist party as opposed to the Knights of Columbus. When will America awake and expel these people from office?

– Unless the candidate was Islamic: the enemy of my enemy is my friend.

These two dumbass scyhos are in league with people – both foreign and domestic – working very hard to destroy our way of life.

“abortion is the killing of the innocent on a massive scale.”

What else would you call it?

Pro-Choice. A quasi-religious/moral order that is selective,
opportunistic, and politically congruent.

America’s fate is sealed. If our government assumes the power to suppress people such as Harris and Hirono, our freedom, liberty and nation will be destroyed. If we don’t suppress such people, their politics will continue to destroy our nation.

Without our citizens voluntarily supporting our nation, it simply cannot hold.

The answer to ‘wrong speech’ is more free speech, not suppression of the speech. The solution is blog posts like this one (thanks Leslie). Trust Americans to sort this crap out, after all, we elected President Trump.

Of course, if the nominee were Muslim they would never grill him about his anti-SSM stance. There’s a “gay Christian” movement that tries to twist the Bible into something that affirms “committed, loving gay relationships” but even a minimal understanding of the Greek (if we’re talking the New Testament) blows that effort out of the water. For instance, while discussed in the context of divorce gospel passages such as Mark 10:2-12 the only form of marriage that has divine sanction is between man and woman (Jesus cites Genesis 1 and 2, “In the beginning He created them male and female…,” and how marriage fits into God’s plan for creation). Moreover the very idea of a “gay Christian movement” is an oxymoron because if you’re going to mangle scripture to that extent you have to begin with the premise that Christ couldn’t have been the Christ but just an ignorant iron age Jew who couldn’t have possibly have known what we know now. What’s really the point of a “gay Christian movement” if you start by declaring your unbelief in the divinity of Christ.

Moreover to say “They couldn’t possibly know what we know now” is a profoundly ignorant statement on many levels. Because even “ignorant iron age Jews” such as Paul/Saul of Tarsus were men of the world who certainly knew of such relationships, as they weren’t exactly unknown in that era in the Greco-Roman world. And that didn’t stop him from condemning the practice.

But that’s a discussion for another day. While Christians certainly must oppose SSM as the abasement of marriage, we don’t run around saying gays should be killed. We believe we are all sinners. Paul frequently said he was the worst among sinners, since as Saul he persecuted Christians. Judgement and punishment is entirely the province of God. We have nothing to do with it.

For Muslims it’s an entirely different matter. There are several verses in the Quran that command Muslims to hate the enemies of Allah as their own, and that the hands of the Muslims are Allah’s tools of retribution in this world while hellfire is Allah’s in the next. So when it comes to homosexuality, not only must the Muslim oppose SSM. If the nominee were to follow the example of the prophet of Islam, the only question that remains for the believer is how best to execute homosexuals. Beheading, throwing them off tall buildings, crushing and burying them by toppling walls on them, or if innovations (bi’dah) such as hanging them from cranes Tehran-style are permissible.

The Muslim would not only get a complete pass, but when the Muslim practiced the divinely sanctioned form of deception know as Kitmun (similar to Taqiyah, but this involves simply denying that any such verses or ahadith are in the Islamic scriptures) Harris and Hirono would aid and abet the lie.

“Are you now, or have you ever been a member of a church?”

Damn… should have read all of the article.

Read most of it on other sites, so I just skimmed this one

Too bad that Buescher isn’t a member of CAIR, or, the Nation of Islam — then he would have the vile Hirono and Harris drooling all over him.

Dumb-o-crats don’t like devout Americans — unless they happen to be adherents of the ideology of “Submission.”

To paraphrase the inimitable Diane Feinstein, in response to Hirono and Harris:

“The totalitarian and bigoted Leftist dogma lives loudly within you.”

Both are hardcore radical anti-christian progressives. It’s like we are back in ancient Rome, and Caesar is going around persecuting all the Christians.

I know Mazie is for a fact. This dull-witted fool has become obsessed with publicity and now takes the extreme leftist position at all times. I suspect she thinks herself VP material.

…no religious Test shall ever be required as a Qualification to any Office or public Trust under the United States.

Why doesn’t anyone call those tw*ts on this?

Hirono’s arguments during the Kavanaugh hearing included her recommendation that men should shut up, and that it is necessary for people accused of such things as Kavanaugh were responsible to prove their innocence. She doesn’t embrace mainstream traditional legal thinking.

Because it doesn’t apply. A religious test would mean the president couldn’t appoint a Catholic, even with the senate’s consent. But it’s perfectly constitutional for a president to decide against nominating someone, or for a senator to refuse his consent, because of the person’s religion.

Wrong answer on his part – IMHO, of course.

The Knights of Columbus has taken a number of extreme positions,” Hirono said in the questionnaire. “For example, it was reportedly one of the top contributors to California’s Proposition 8 campaign to ban same-sex marriage.

By definition, it cannot be “extreme” to support a proposition that was carried, by a substantial majority.

As if these two senators would vote for him anyway. They will reject him regardless.
Why can’t people just come out and state what they believe. Remind the two senators that Yes I believe that abortion is the destruction of a human life and that same sex marriage is a sham and should have been left to the states or even just individual churches etc.
But instead he provides a wimpy position that …well I’m only involved in the charitable work portion.
This is what we have become.
So many people are afraid to say what they believe because leftists will be horrified of them and maybe say something on Twitter that isn’t nice.

This is the warm up for the Barrett hearings for SCOTUS…. Barrett will likely qualify for martyrdom when that confirmation is finished.

Maize Hirono may be the stupidist Senator in Congress today. Of course, that will be a big disappointment to Sparticus, who has been in the running. Kamala Harris, by definition, must be smarter. But she has no allegiance to logic or good sense. Hard to believe that Californians are so deluded they chose Harris as a Senator. Easier to believe that Hawaiians are paying no attention.