Is this a sign of future problems with the nation’s electric grid? 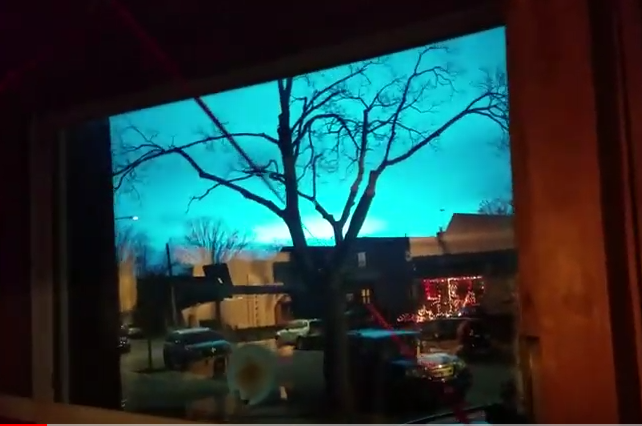 An explosion at a Con Edison facility in New York City’s borough of Queens set-off a spectacular streak of blue light, caused power outages, and had some locals afraid of an extraterrestrial invasion.

Mayor Bill de Blasio’s office quickly made an announcement on Twitter that the situation was being addressed and there was no threat from outer space.

“We’re working with the @FDNY to respond a substation fire in Astoria and will provide updates as soon as we have more information,” Con Edison wrote on Twitter.LaGuardia Airport suffered power outages and all outgoing flights were temporarily suspended, City Council Speaker Corey Johnson said.

“We’re working with the @FDNY to respond a substation fire in Astoria and will provide updates as soon as we have more information,” Con Edison wrote on Twitter.

The show made for some astonishing clips that were shared on social media.

Looks like a transformer at the Con Ed plant blew. Fire seems to be out now. Is everyone ok? pic.twitter.com/lydIkhYMy5

The LaGuardia airport is now running on back-up generator and the initial assessments indicate the impact of this transformer explosion was minimal.  While losing power is no fun, some of the speculation and movie references were hilarious.

Yea, this EPA jerk just went against everything Peter Venkman said and released all the ghosts back into the city. pic.twitter.com/XejPjlHKOp

This does not appear to be the work of extraterrestrials. (Though, to be fair, if it actually was aliens, that’s exactly what they’d say.) https://t.co/snui3trK4p

However, what might be less fun is what it means about the current state of the nation’s electrical grid. In most of the country, the electric transmission infrastructure was built over 40 years ago. Since it hasn’t been updated significantly, America’s power security is at risk.

Anyone remember the last big East Coast blackout in 2003? That was caused by a squirrel in a transformer. (OK, it may have been a falling tree branch, but I hate squirrels.) One section went down into darkness, and as the system tried to compensate by rerouting the power, more systems failed, until a major chunk of the Eastern U.S. had gone black.

Also, remember the attack on a California relay station by unknown gunmen in 2013? They shot up several of those huge ceramic devices with rifles and, as the internal liquid leaked out, the system shut down. In this case, power demands were rerouted successfully without further incident. Experts later revealed that, had the bad guys simultaneously hit a second facility a few miles down the valley, the resultsb might not have been so fortuitous. The western third of the U.S. might have been dark for an extended period.

Additionally, I recall the Southwest Blackout of 2011, which had me scrambling in my camping gear for lights and cooking equipment. The event underscores the public health and economic consequences of a regional blackout.

At the end of their summer season that year, the continued hot weather caused California’s engineering schedule to conflict with planned outages (for maintenance). This then left the grid vulnerable to human error. A technician switched major equipment, which caused the power to fail for around 12 hours and affect 2.7 million Americans.

The impact to restaurants and grocery stores was devastating. Due to the length of time the power was out they were forced to throw away food at an estimated cost of $12 to $18 million. Several sewage pumping stations also failed, causing the potential for unsafe water in many areas.

Hopefully, NYC will get their electrical grid in shape before New Year’s Eve. Even better would be some monies and interest directed at updating and upgrading out nation’s power infrastructure (without any climate change inanity included).

Another reason to live in Texas; we have our own power grid.

Cool site, I hadn’t seen that before. It would be nice if it had the ability to compare outage rates from area to area. Also note on his about-page his data collection technique; he’s scraping data from utility outage-management-systems, so states with a higher percentage of utilities making their outage data public will appear to have more outages.