The influx of blue state refugees fleeing to Texas has many concerned that the reliably red Lone Star State might be purpling. Apple’s announcement of an upcoming Austin campus only added fuel to the worry fire.

According to the latest data from the U.S. Census Bureau, Texas grew by 1,000 people per day this last year. Massive growth, even if half were babies.

As LI readers have pointed out repeatedly, most, not all, but most people who move to states with greater economic opportunity are the kinds of people who will contribute to the state’s success, not leach off of it.

People moving to Texas are voting Republican. This exit poll matches my campaign poll showing about 60% of people who moved to TX voted for me. It makes sense. If people want more government running their lives the last place they move to is TX. #txlege https://t.co/B5PzXpeB14 https://t.co/OsG3zm0w7a

November election exit polls published by CNN support Abbott’s contention, though it would be nice to have better data on those recently moving to Texas. From those polls: 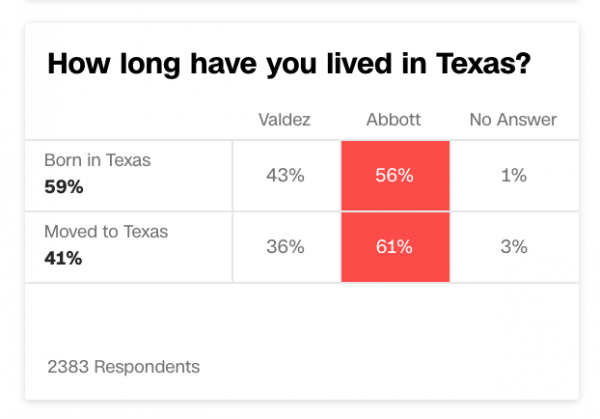 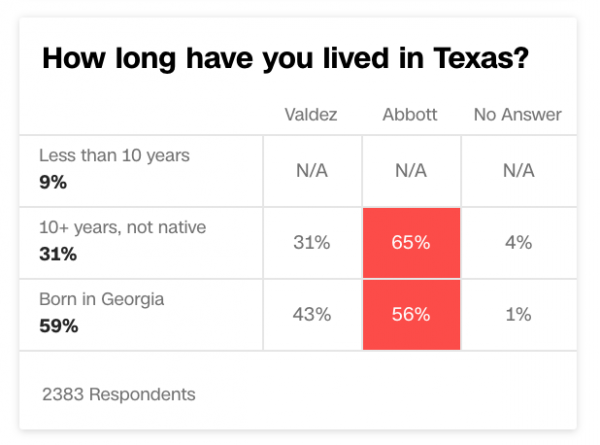 god bless the state of texas

There are multiple Texas’ within Texas. Austin is the capitol but otherwise not particularly representative of Texas. You have the liberal enclave of Boston/Austin and then the rest of Texas, the good parts, excluding the massive metropolises of Dallas, Houston and the lesser of San Antonio.

Austin speaks but Texas and Texans don’t care. I believe that Gov. Abbott has his fingers on the pulse of Texas and knows her as well as she may be known.

As to Obamigrants settling in the state? Once they find work and establish roots, they will not be Democrats as they will have earned their money and all that they have. Hispanics, to my experience, are not lazy and do not expect something for nothing. To the contrary, they work very hard to carve out a place in life, just like most folks, except for socialist democrats and pitiful millennials.

No doubt “The People’s Republic of Austin” (otherwise known as Austintacious) is not representative of the state. But all urban areas are blue or turning so. They may soon outvote the rest of Texas.

Texas is turning Blue, there is no doubt

Beto the loser ALMOST won, he shouldn’t have been close

The idiots still have his signs up all over the place, decals, they can’t wait for the nanny burglar fake Mexican to run for President…

Beto was an anomaly. Abbott’s win would be much more representative of statewide sentiment.

No, the idiots came out of their basements to vote for Beto
The left loves “ cool”
They are absolutely nuts and unfortunately millions are in Texas turning it blue.
Abbott is going to be the anomaly moving forward unfortunately

When Texas turns blue, its all over
They have California, New York, Texas, and possibly Florida next cycle or two

I’m afraid the looming blueness is real. I am in the process of moving to Texas. I’m so sick of this California leftist madness.
But we all still seem to dismiss this most recent midterm election of Democrats ‘harvesting votes’. Unless there is some real reform of our election process, this was a practice that worked in favor of the Democrats. They will surely use the same technique in 2020.

It only worked in favor of the Ds because they did it and the Rs didn’t. Next time the Rs will surely do it too.

Unless you’re talking not about the harvesting itself, which is completely honest where legal, but about the cheating that legal harvesting opens the door to. Honest Rs, of course, won’t do that.

I don’t think so. The number of votes in the senate and governor races were pretty much the same. It’s unlikely that these roaches came crawling out of the cracks in the adobe just to vote for Beto without voting in the governor’s race – or that Abbott voters wouldn’t vote in the senate race. More likely is that a bunch of voters voted specifically against Cruz for reasons specific to him, (or, of course, voted for Abbott for the same reason).

if you look at the election map you’ll see that the blue areas of the state are Dallas, Harris, Travis and Bexar Counties along with the Rio Grande counties. the rest of the state is red

Admittedly, I don’t know much about Governor Abbott. However, each time I’ve heard about him I’ve been impressed. I wonder if he is presidential material. In 2020, he would be 63 years of age.

For the record, I moved to Texas back in June of ’87. I’ve lived here longer than in any other state (NY – 18yrs, MS – 12yrs). I think I can legitimately call myself both a Southerner and a Texan.

Also submitted for your consideration:

Texas is too hot.

Too flat, too, but that’s not as bad as being too hot.

North of Conroe and west of Sealy, but Houston is a humid swamp unless there’s reason for it not to be.

only a dry heat west of I35. otherwise, oppressive humidity.

They’ve invented a wonderful new technology called “air conditioning”. Lots of us use it.

Yes, Willis Carrier was a great man and a fine American.

But even he couldn’t do much about the outdoors.

You get used to it. I used to hit the golf course during summer afternoons when the temps were up around 100-105. The ball flies forever, and you never have to wait for the five-some in front of you.

We have the Ocean, beaches, mountains, vast ranches and the hill country…

Texas has it all

Yes, as a native Texan, I love it. But being well into retirement, I envy those who have summer retreats in the far northlands.

Rent a cottage for two months in Wisconsin