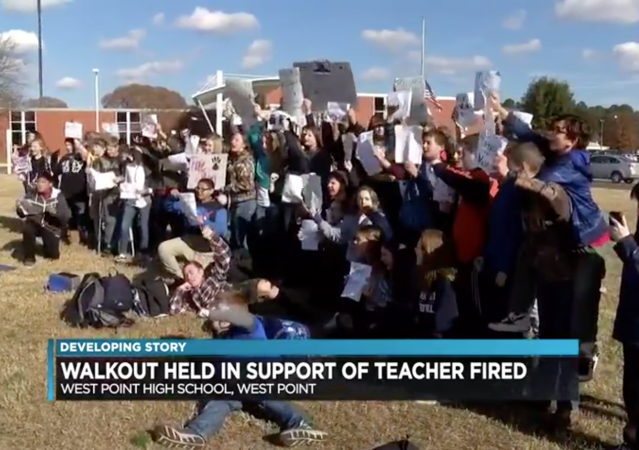 Vlaming attempted to accommodate the student by using her preferred name instead of any pronoun; an accommodation the school board found insufficient. “Mr. Vlaming was recommended for termination due to this insubordination and repeated refusal to comply with directives made to him by multiple WPPS administrators,” said Superintendent Laura Abel.

Less than 24 hours after Vlaming was fired, students held a walkout to protest the firing of Vlaming.

Student chant “bring him back”. Most of them have been outside for nearly an hour at this point. There’s a mix of high school and middle school students out here right now. #VAnews #NBC12 pic.twitter.com/GOfLCD4PmN

Less than 24 hours after the West Point, Virginia school board unanimously voted to terminate high school French instructor Peter Vlaming, a large group of students walked out of their classes to protest the decision.

“He’s an amazing man,” student Wyatt Pedersen told WWBT News. “I think he really was going with what he believed was right and it’s really unfair that he’s being punished for that, especially in such a dramatic way.”

Forrest Rohde, the West Point High School junior who organized the walkout, emphasized that the protest was not about the transgender student. Rather, he said students took issue with the school board “trying to force the teacher to conform to their ideologies with the threat of removal from the school.”

They got a little far from DC to be pulling this nonsense.

The whole thing screams of a look at me moment, too. How often when addressing someone directly do you call them by a gender-specific pronoun?

It’s usually “you” which is gender neutral.

Important distinction is we have left the world of FREE SPEECH and entered the world of COMPELLED SPEECH. Legally, this is very different. 600 years of English Common Law and multiple SCOTUS rulings have found that Compelled Speech is illegal.

How long before GoFundMe pulls down the page for Vlaming? They did it with the florist in Washington state whose business was ruined by LGBT terrorists.

Why is it that things like this end up showing us that the “adults in the room” are the children. Of course its not the kids’ fault, they have not had their indoctrination at a university yet.

Remember that it was a child who exposed the fact that the emperor’s new clothes left him naked.

I was just at Ulta and referred to an employee as “she” and then saw the person’s name tag read, “Jonathan.”

Same thing happened to me. Big burly guy working in a department store had a name tag with “Penny” on it.

On second thought, it read “JCPenney”.

Was it this guy working his second job?

Sorry for the ‘downvote’; I did not mean to do that. I fat-fingered the ‘reply’ button and I know of no way to cancel a vote. Again, I apologize.

(MEMO TO SELF: from now on use the touchpad instead of the touchscreen.)

There is no banana oil or paint thinner control in China – or anywhere else.

These mentally ill trans people a forcing society to accept their hallucinations. A better solution would be to develop medicine that allows them to deal with reality. The fact that their gender is determined by their genes is reality.

Sex is determined by genotype. Gender is a set of physical and mental (e.g. sexual orientation) attributes that are determined by phenotype, and, apparently, choice. The transgender spectrum is inclusive from L to X, and reflects a significant loss of correlation between sex: male, female, and gender: masculine, feminine, respectively.

Nothing you said after genotype was remotely true.

Since when does single digit percentile represent a significant loss of correlation?

Well, if you’re going to make up the concept of “gender” then I guess you can make up the defining characteristics. “Gender” is a grammatical term relevant to languages that give a gender to each noun; “gender” as a human descriptor (especially one distinct from sex) is imaginary.

Who else would shoot or torture their fellow citizens for food stamps, a free cell phone and a uniform?

This is my policy for both these idiots and those pretentious douchebags where you go to introduce yourself and they look down their nose and say `actually it’s DOCTOR, not Mr`.

This is about FORCING you to heel to their delusions.

And it’s almost always some douchebag with a doctorate in “Education.” I’ve known people with advanced degrees in engineering, physics, biological sciences, and other fields, but the only ones who insist on being called “doctor” because they got a PhD in some field other than medicine are Baptist preachers and school administrators.

When someone pulls the “that’s DOCTOR Smith” card on me, my response (when I’m feeling my oats) is to tell them I have a mole on my upper thigh I’d like them to take a look at.

Screw that. I’m going to guess that this confused person’s whining complaints are what precipitated this little crisis.

The same confusion arises when pro-human rights people refer to a human life early in her evolution as “baby”, and pro-choice people refer to it as a “fetus”, a “colorful clump of cells”, or a “lucrative assembly of parts.”

This is not an easy case.

First, the parents had met with the administration of the school and the teacher to make sure their wishes and that of the child would be addressed using male pronouns.

While we may disagree with the parents choice, the next time a school says a child must be taught evolution, sex ed, acceptance of homosexuality, etc against the wishes of the parent, remember this case. Remember that some are saying that the teacher can act against the parents’ wishes.

Who gets to decide what is correct for the child? The parents or the school board or a teacher?

Secondly, the teacher claimed that there was only one time that he used “her” instead of what the parents wanted “him.” Students disputed that claim.

Third, while employment can be terminated in most jobs for insubordination, one of the things that you cannot terminate for is failing to follow an order or directive that violates your moral or religious code. The School Board has a problem there.

Fourth is the issue that West Point High has only 260+ kids in it and 21 staff including the administration. The chances of another French teacher in the school are slim and none. There was most likely not another class for the kid to attend. There doesn’t appear to be a way to have accommodated both the wishes of the parents / kid and the religious beliefs of the teacher within this particular school.

The difference between this issue and those is the issue of free speech.

“Remember that some are saying that the teacher can act against the parents’ wishes.”

First, the parents had met with the administration of the school and the teacher to make sure their wishes and that of the child would be addressed using male pronouns.

No parent has a special right to redefine the English language, any more than he can demand that the social studies classes teach that the world is flat, or a history class teach that Abraham Lincoln was a Democrat. These are not fine points of contention; they are undeniable reality. And so is pronoun usage in English.

Actually, this is an incredibly EASY case.

We expect our schools to impart truth and accurate information to our children. We also expect a certain amount of conformity from the minority portions of society. The current practice of overturning all majority societal norms to cater to a statistically insignificant portion of society is simply insane.

The student involved is a biological female. The accepted English pronouns for a female are “she” and “her”, not “he” and “him”. So, if a female, who “identifies” as male, wishes to be called he and him, then SHE will have to wait until SHE is biologically a male.

Sounds like you may have one of those “advanced” education “degrees”.

“This is not an easy case.”

I disagree. There is objective truth that the parents of this child are trying to deny. That is that their daughter is biologically a female.

Reality doesn’t care about what’s politically correct. I’m glad to see these young people making a stand for facts in a world where even truth is too often considered subjective, and where some people think it’s “compassionate” to cater to delusions.

It’s not mentioned here, but the teacher offered to refer to the student strictly by name (which would have been cumbersome, but correct.) The fact that this wasn’t good enough, and was ordered instead to use “preferred pronouns” demonstrates that this was about Leftists demanding submission, not about respect.

Munchausen’s by proxy. This is a perfect opportunity to play the “mandatory reporter” card. Even Tony Soprano is scared of Child Protective Services.