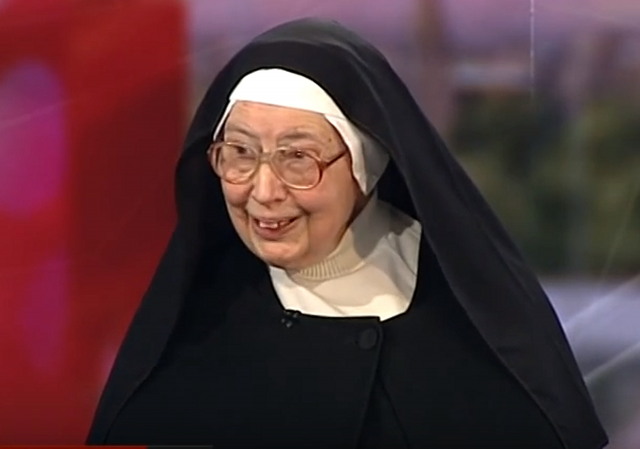 Sister Wendy Beckett, a British nun who wrote books about art and became a television sensation in the 1990s, passed away at the age of 88. She will be greatly missed.

Sister Wendy Beckett, a nun and art historian who became an unlikely television star in Britain in the 1990s, died at the age of 88 on Wednesday, the Carmelite monastery at Quidenham in Norfolk said on Wednesday.

“I can confirm that Sr Wendy Beckett died today, at the age of 88, at 2.16 pm at a residential care home a couple of miles away from the Carmelite monastery at Quidenham”, a spokeswoman for the monastery told Reuters in an emailed statement.

South African-born Beckett was living in a caravan in the monastery in eastern England when she started studying art in the 1980s, according to the BBC, which broadcast her documentaries.

Beckett wrote around 25 books, which included collections of poetry and meditations, and made a dozen documentaries, according to the New York Times.

The Independent UK has more on her life:

Sister Wendy was born in South Africa in 1930 and raised in Edinburgh where her father studied medicine.

At 16 she joined a convent and in 1950 was awarded a Congratulatory First Class degree in English literature from Oxford University. She later taught in cities including Cape Town and Liverpool.

She began studying fine art in the 1980s and wrote a book on the subject to raise money for her convent.

Contemporary Women Artists, published in 1988, was followed by more books.

She lived a hermit-like existence in a caravan in Norfolk until 1991 when the BBC commissioned her to present a television documentary on the National Gallery in London.

Sister Wendy had a natural ability to interpret art works and offer analysis extemporaneously on camera. Her style made her instantly likable and led to numerous TV programs featuring her examining famous works.

Here’s a clip where she discusses Botticelli’s Birth of Venus:

One of her endearing qualities was her refusal to shy away from controversial works. In an interview with Bill Moyers, she shared her thoughts on the 1987 Andres Serrano photograph “Piss Christ” which features a crucifix submerged in urine. Her analysis is outstanding:

In this segment, she talks about Claude Monet’s “Water Lilies” series and brings the work to life with ease. The video is cued to start at the 6:25 mark, just press play:

She was truly one of a kind. Rest in peace, Sister Wendy.

Sad to hear of passing. When I first stumbled unto her videos I was at first dumbfounded but the more I watched it was fun and instructional. Didn’t see that coming with a unassuming nun. Best to say she could describe worldliness of art… being in the world but not of it.

Sorry to hear of her passing. I learned more about art in one episode with her than a semester in college. She had a mixture of self confidence and humility that made her effective. She was confident in her analysis, but didn’t lord it over you like art snobs try to do. RIP Sister Wendy – you are already missed.

Interesting. I’d never heard or thought of that take on Piss Christ before. Interestingly, Tanya, one of the most important expositions of chassidic philosophy, makes a similar point, comparing one who commits a sin “to one who seizes the king’s head, drags it down, and dips his face in a privy full of filth — the ultimate in humiliation, even if he does it only for a moment.” (end of chapter 24)