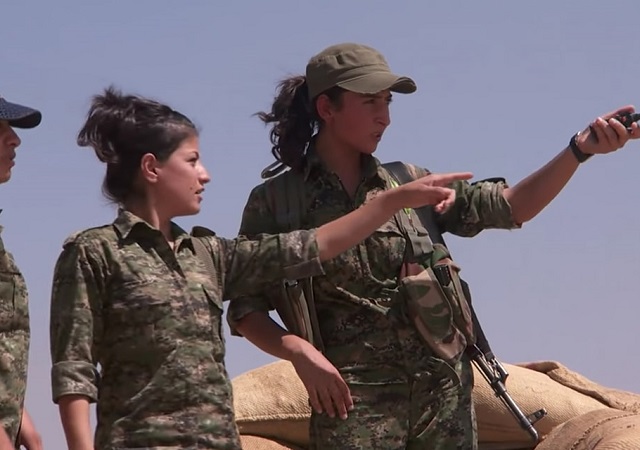 There have been some intriguing developments related to Syria that are now being reported in the wake of President Trump’s announcement of the withdrawal of U.S. troops.

To begin with, it appears that the Kurds will be getting support from America’s regional allies.

The paper said the forces will be stationed with US-led coalition troops and will support its tasks with huge military enforcements as well as heavy and light weapons.

Quoting the Syrian Observatory for Human Rights, the newspaper reported that a convoy of troops belonging to an Arab Gulf state recently arrived in the contact area between the Kurdish PKK/YPG and Daesh in the Deir Ez-Zor countryside.

This comes at a time when Ankara is preparing to launch an expanded military operation with the Free Syrian Army against the Kurdish PKK group in the northeast of Syria.

Furthermore, a Jordanian official reports that Russian forces currently in Syria will take action to restrain Hezbollah and Iranian activity there, according to understandings reached by the U.S., Israel, Jordan, and Saudi Arabia with Russian President Vladimir Putin.

The understandings are the product of behind-the-scenes diplomatic talks that were underway prior to U.S. President Donald Trump’s decision this week to withdraw American forces from Syria.

According to the terms of the understanding, Russia will continue to give Israel the freedom to strike Hezbollah and Iranian targets and weaponry that threaten the “balance of power” in Syria. According to the Jordanian official, it was these understandings between Trump and Putin that paved the way for the U.S. decision to pull its forces from Syria.

Other high-ranking Jordanian officials have confirmed that Jordan, Israel and Saudi Arabia are working together to contain the threat posed by Iran and Hezbollah’s presence in Syria. Several of them emphasized that U.S. officials had made it clear that U.S. intelligence agencies would increase cooperation with Israel, Jordan and Saudi Arabia, particularly on sharing intelligence, in a joint attempt to counter Iran’s attempt to create a contiguous Shi’ite corridor from Tehran to Beirut.

Finally, Saudi Arabia is hosting Afghan peace talks, which are slated to take place next month.

US special envoy Zalmay Khalilzad on Wednesday arrived in Kabul from three days of meetings in Abu Dhabi, including the fourth round of a quadrilateral meeting among the US, Afghanistan, the UAE and Saudi Arabia.

The meetings were part of efforts by the US and international partners to promote an intra-Afghan dialogue aimed at ending the conflict in the landlocked country.

Meanwhile, reliable sources said decisions in the UAE centered on an amicable Afghan settlement and the next meeting would take place on January 15, 2019 in Saudi Arabia.

Perhaps we will see if this regional-power approach is a better match for long-term success in 2019.

That’s pretty much what we’ve been looking for; the locals are stepping up and engaging with their neighbors. Erdogan’s attempt to drive a wedge between the US and SA over Kashoggi has failed. I wonder how far Erdogan is going to push the Kurds?

IF Erdogan has what he wishes, he’d commit genocide and eliminate every last Kurd within 500 miles of Turkey’s current borders. And, he actually managed to get the new Caliphate started (with him as the Caliph), he’d would continue ethnic cleanup at 500 miles every time Turkey increased in size. He likely wouldn’t be shy about eliminating the Armenians, Macedonians and particularly the Greeks if he could either.

…if he actually managed…

Donald J. Trump: Is there nothing he can’t do?

I’m just kidding, but my word, there’s a boat load of stuff in that one sentence to unpack.

Mattis, et al will all either be on the wrong side of history in regard to Syria, or this strange bed fellow alliance will be a mile wide, but an inch deep, working at cross-purposes, and soon blow up in Trump’s face.

“Glory to God in the highest, and on earth peace, good will toward men.” Luke 2:14

‘Tis the season for miracles and reconciliation.

By definition, the U.S. not being there will by itself lessen tensions. We tend to get other people all excited, albeit by no fault of our own.

It’s pretty obvious Erdogan felt safer bombing Kurds as long as he didn’t have to take responsibility for the aftermath thanks to the US presence.

I am for the Kurds, who are next to Israel and to some extent Egypt and Saudi Arabia, our allies. We have betrayed the Kurds before. Yet I can’t imagine DJT standing by and letting Turkey go into that region and eliminate the Kurds.

So, if true, this is a welcome development. And rest assured, it didn’t happen by accident. Mattis was too much an ‘intellectual’ liberal, pro Paris Accords, pro-Iran deal, pro transgender soldiers. He and Trump have been knocking heads for a while now. I won’t miss him.

I don’t believe there will ever be an independent nation called Kurdistan. Such an entity would be landlocked, and encircled by hostile powers. So some kind of cut out small state will be the end game, much like what the Kurds had in northern Iraq.

We should push for it, even if that means dropping a bomb on the tools of that miserable wretch who runs Turkey. He’s been begging for it for years.

Begging or not, the US still has uses for the NATO airbase in Turkey and its loss would not be inconsequential, so, begging or not, it’s best to avoid dropping bombs on him and having US servicemen/ women becoming his extended guests. Otherwise I think you have the right idea. It’s a lot more stable than anything the US could have offered… and even 200,000 troops without the benefit of Turkish supply lines/ airbase support might not even be enough to protect a landlocked Kurdistan longer term. At least, not against Turkey.

A list of those not inconsequential uses would be helpful. I do recall we were unable to mount an attack from Turkey in the Gulf war, so it’s of no strategic use in the region.

If it’s unusable in the region then it’s only possible strategic value is a counter against Russia which requires nuclear warheads. Do I really want nuclear warheads in Turkey? I don’t trust them or our political will to protect those warheads in the event of conflict with turkey.

I’d prefer 10 more Ohio class submarines. Less expensive than an airbase in Turkey, deployable anywhere, and a surprise where they pop up.

If that’s how you want to play it, advocate for US withdrawal from NATO. I see no sign that the UK, France, Germany, Italy, or other NATO members have any interest in abandoning use of the airbase in Turkey. If that’s worth it to you, be my guest and advocate for it.

I view its strategic value as diminished, okay? But not zero.

What value to America do you believe NATO has?

I just asked you to provide some of the value the air base in Turkey has to the USA. Perhaps there is something I’ve no thought of or read about.

If you cannot, just say so.

The “UK, France, Germany, Italy, or other NATO members” have such little capability in the air that an air base has zero value to them.

A coalition of the willing, and proximate stake-holders, with the authorized power broker of the Syrian government, has a potential to effect a sustainable peace in the region. This would explain why America is justified in withdrawing forces to Iraq, where we can complete our work with Iraqis to secure their nation, the historical and geographical fulcrum in the Middle East.

Peace in the region is unlikely. There is a reason that Middle East policy has always been difficult. Peoples of the region are, to put it mildly quarrelsome, and when they do not have outsiders to fight with, they fight among themselves.

No, this can’t be right. I’ve heard it from many irrefutable sources that the absence of a U.S. presence in Syria will hand the region over to the Russians and there will be a terrible bloodbath. The Kurds will be wiped out and it will be ALL OUR FAULT.

Apparently, somebody failed to get the memo.

The argument angers me because I was around the last time everyone was saying our betrayal of the Kurds would mean no one else would work with us ever again.

So how do they explain the Kurds in Syria (as opposed to Iraq) working with us? The Saudis for that matter? Or maybe it was never that simple to begin with, except as a rhetorical club against other Westerners.

During this season of joy and remembrance, we should all take time to thank Jimmy Carter for expelling the Shah and letting the Assahola Ho-Ho-HoMeaney have Iran. Where would the middle east be without his leadership?

Of course there is another option here.

The Kurds could pull out of Northern Syria and then let Turkey, Russia, Hesbollocks and the Syrians kick the living fuck out of each other and then once everyone declares victory and goes home just go back in and take over again.

Then repeat and rinse as many times as needed.