Russian “robot” is actually a man in a costume

Russian “robot” is actually a man in a costume 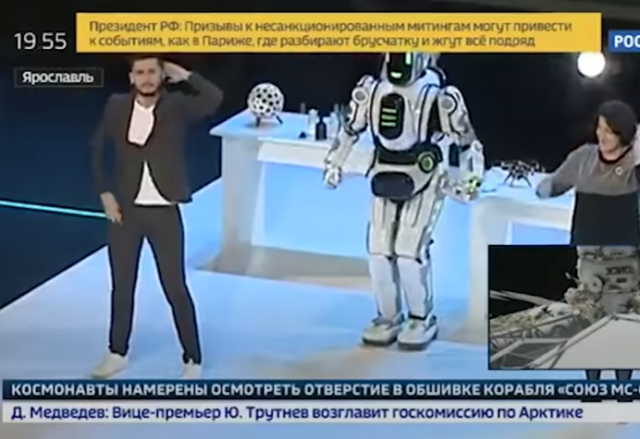 Despite the news reports that the Russians are suppose to be so technologically savvy that than can alter American elections, it seems that the reality is less than the media would have us believe.

A robot featured on Russian state television was actually a man in a suit.

Russia-24 praised the ersatz android during coverage of a youth forum dedicated to robotics, boasting that “Robot Boris has already learned to dance and he’s not that bad”.

But sharp-eyed bloggers were dubious. The Russian website TJournal listed questions about the robot’s performance: Where were Boris’s external sensors? Why did the robot make so many “unnecessary movements” while dancing?

And why did the robot look like a person would fit perfectly inside of it?

Later, photographs of the “robot” posted on social media showed the very visible neckline of the person in the suit.

Once the jig was up, Russia 24 had a spectacular explanation.

After the report was ridiculed online, state television returned to the story on Thursday, with the correspondent claiming it was understood all along that Boris was a man in a plastic suit — albeit a good one. According to The Guardian, the “Alyosha the Robot” costume retails for about $3,800.

“I was just completely certain that everyone, just like Father Christmas, would definitely know that it’s an actor in a costume, knowing that the whole project was created for children,” the Russia-24 anchor said on Thursday.

Everyone knows that if you want a great robot, you turn to the Japanese.

Honda is gearing up to supply small, off-road robotic work vehicles that may come in handy for farms, construction sites and even firefighting.

The Japanese carmaker, which is also a global giant in motorcycles and all-terrain vehicles, developed a prototype Autonomous Work Vehicle built off its ATV architecture. The small vehicle, using AI, GPS and visual sensors, is designed to serve as a small self-driving wagon to carry supplies and materials into hard-to-reach locations, assist with harvesting or spraying of crops or carry gear and water needed by fire crews battling forest blazes.

If I were the Russians, I would be worried about being sued by Disney for trademark infringement.

His gyroscope is wobbly, but as a technologically augmented human, he is state of the art. However, as a robot, he’s probably 40 to 50 years behind the times.

They’re smart enough to play Democrats and progressives to carry water, or so it seems.

Prewar German robots were pretty good, though they wouldn’t actually fool anybody—

So, was Sputnik the real deal, or was there something phony about it, as well?!

The same truth as the “moon landing”.

Shouldn’t this article be accompanied by the requisite “do the robot video”?

Yes, I think it should… DO THE ROBOT! : STAR WARS Battlefront