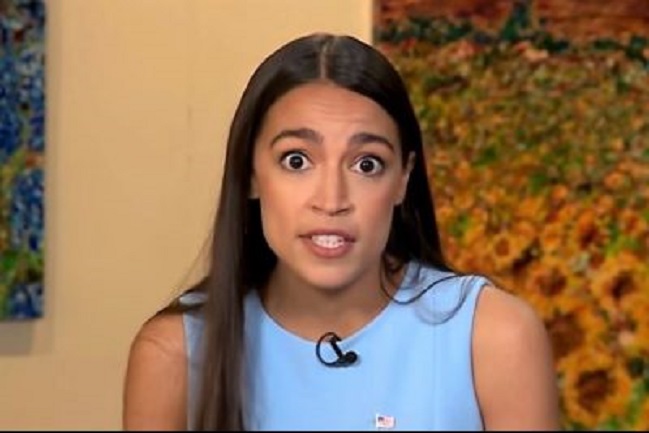 Hey, why not? What could possibly go wrong?

The constitutional prohibition on people under the age of 35 serving as president is just one of these weird lacuna that was handed down to us from the 18th century but that nobody would seriously propose creating today if not for status quo bias. Realistically, most people that young would simply have a hard time winning an election. But if you can pull it off, you should be allowed. And I kind of think she should run for president.

Yglesias acknowledges that it’s difficult to do the “fixing” via constitutional amendment. But he thinks we should try so that hosts of young people who’ve never done much of anything in life except be students should get to head a country.

I wonder, though, why Yglesias is so keen on Ocasio-Cortez herself running. Does he think she would win? Does he hope she would win? And could she in fact win? Wouldn’t it be nice if she actually took some sort of office first? The new Congress hasn’t even been sworn in yet.

At least Obama had a career as state senator and a couple of years as U. S. Senator before running for president. And although Donald Trump never held office prior to his presidential run, no one can deny that he’d previously had a lengthy career being in charge of many things in the business world.

However, it’s no surprise that Yglesias would champion the cause of youth doing whatever it wants in terms of running for office with no restrictions. A Harvard alum who majored in philosophy, Yglesias began his own career as a blogger while still a college undergrad, and he’s been a writer for various publications ever since. He’s now reached the advanced age of 37, making him almost geriatric—and able to run for president under the Constitution.

But there’s more. Yglesias went further in a tweet than he did in his Vox article:

AOC should run for president and dare the Supreme Court to stop her imo. https://t.co/TSviLpL1qJ

And of course Ocasio-Cortez—about whom one can say many things, but one of them wouldn’t be that she’s excessively humble—had already weighed in on the topic:

PHOTOG: “You can’t even run for president for another six years.”

PHOTOG: “That is awesome. All the people who say a literal interpretation of the Constitution is the only thing you should be paying attention to.”

AOC: “Exactly, all those Constitutionalists, I will keep vigilance.”

— NOTE: The Constitution does not say “he”. It says “any person.”

That exchange appears to be some sort of joke by Ocasio-Cortez. But I strongly suspect that if she thought there was a chance of actually running she would do so.

Ocasio-Cortez is a potent combination of overwhelming ego, attractive physicality, ignorant youth, and doctrinaire ends-justify-means leftism, and if she ever did have that much power I believe she would happily and enthusiastically take her administration in the direction of Venezuela’s Chavez or worse.

Don’t worry, they will teach her how to use a teleprompter so she won’t have to “think” anymore.

Yglesias: “And I kind of think she should run for president.”

Kind of think… Love the conviction! What a worm…

We should change the minimum age for President.

Ok, James Polk was 49, and he worked out OK, I guess. And he died at 53, so he didn’t have much time to squeeze in a term, so in his case maybe jumping the gun a bit would have been justified.

Matthew Yglesias is a friggin’ idiot. But what else is new.

There is a physical basis for the 25-year voting age: That’s about the time when the human brain finally matures. That stage yields forethought.

So what happened to Hilter-Cortez? She’s 29.

Those who vote should also be property owners. Those who have a real stake in this country.

I find it frightening that we have this small minded idiot even going to Congress. She got in with bribes of our tax dollars, promising things she cannot deliver.

She makes me ashamed of the electorate, how easily fooled the useful idiots of the left are, that they can elect an ignorant fool, and worse, make out as if she is some rock star of the National Socialist Party.

Today is the anniversary of the start of the Battle of the Bulge. This twerp would probably think that is simply some kind of diet plan.

“Those who vote should also be property owners.”

“…how easily fooled the useful idiots of the left are…”

Look harder, there is some real evil to be seen here.

So is Ms. Occasional Cortex.

This is like a dog chasing a car. What does he do with it when he catches it?

If little Matty Yglesias ever stepped out of his prog bubble he would promptly get punched in the throat. What an ignorant little c*nt.

I can almost feel the IQ points being sucked out of my brain whenever I see her picture. There’s probably some kind of osmosis going on with that.

No because a hypothetical osmotic effect would lead her to gain IQ points at your expense. Clearly, she has not.

“Arrogance and stupidity all in one package. How efficient of you.”

Another crazy eyes running … Be scared of Cory Booker. He is following in the foot steps of Obama.

Another crazy eyes running … Be scared of Cory Booker. He is following in the foot steps of Obama.

Ocasional-Cortex is a potent combination of abhorrent physicality…. and weapons grade stupidity. (FTFY!)

she’s ugly, inside & out. not to mention being dumber than my 15 year old Persian cat, which is saying a whole lot, since he’s getting senile.

Dumber than you cat? She’s dumber than a box of rocks!

As we used to say about orthopedic surgeons: smarter than a rock, but not quite as smart as a tree.

I must say, she is much more physically attractive than Hillary Clinton. It doesn’t get much more Presidential than that, I suppose.

Matthew Yglesias is playing “F**k the System”. His suggestion is pernicious, because it would be setting the US Presidency up for failure.

It is part of something that seems to have become mangled, and that is not a joke, presidential eligibility.
Age is just another criterion, I guess that will get mangled too. It is in the Constitution, it is simple, it is clear, but nothing surprises me these days.

Love the head and shoulders picture, the one with the “deer in the headlights” look.

It is sad that Ocasio-Cortez studied Economics rather than history. No sitting member of the House, who was not serving as Speaker, has ever been elected to the Presidency. So let AOC explain way a House member, shunned by her own caucus, no speakership, leadership position or committee chair, should somehow be considered to the best person to lead her nation.

Alexandria Occasionally-Competent ‘splains that she deserves to be VP so she can hold Uncle Bernie up for the eight years he’s Prez until she can run legally and take an additional two terms after being in-the-background Prez with Uncle Bernie as the “puppet”? for seven of the eight he was Prez.

It wouldn’t matter. She has absolutely no concept of how this or any other economy actually works. I hope her strange attractiveness at least allowed her to have some satisfying sexual adventures in college, for it’s clear she got nothing else from it.

That may explain why she is running for office; now, she wants to screw everybody!

notamemberofanyorganizedpolicital in reply to David Lentz. | December 18, 2018 at 12:08 pm

And that degree from where she was given it, almost guarantees she’s never had a single class in Financial Accounting, nor in Finance.

Reading or listening to the news is like Reading the Onion.
It’s Animal House repeated.

I don’t know why this was put in place but I don’t like it so it should be changed.

She’s really pretty when she keeps her smile under control.

This woman needs to marry into the Kennedy family.

“AOC should run for president and dare the Supreme Court to stop her imo.”

Interesting. That was the same tactic southern segregationist Democrats used to implement Jim Crow laws. Just try and stop us, you damn Yankees!

Democrats have a REAL problem with the Constitution and the rule of law.

What could go wrong? I don’t know, what is wrong with how hot a nuclear bomb explosion is? Do you really think that little Miss crazy eyes should be in charge of nukes?