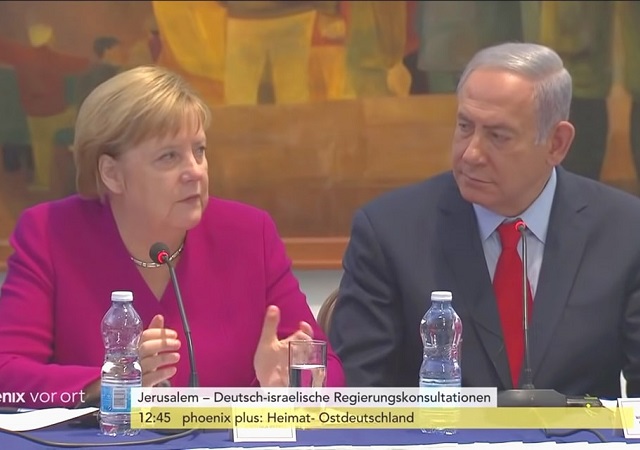 German Chancellor Angela Merkel has been working behind the scenes to prevent European Union member countries from recognizing Jerusalem as the capital of Israel, the newspaper Jerusalem Post reported.

The revelation was made by Tomas Sandell, the director of the European Coalition for Israel in Brussels. Chancellor Merkel made a series of calls to European leaders in April while “many of the nations were seriously considering moving their embassies.” Sandell said. “This is not the Germany we once knew. This is not the even Angela Merkel we once knew when she was elected.”

German Chancellor waged a ‘fierce campaign’ to stop European countries from moving their embassies to Jerusalem, Weinthal, who broke the story in the Jerusalem Post early Tuesday, wrote on Twitter. The move was meant to keep Iran from quitting the nuclear deal and punish Israel for not toeing the EU line,  he added.

Weinthal, who is also a research fellow at the DC-based Foundation for Defense of Democracies (FDD), reported in the Jerusalem Post:

The founding director of the European Coalition for Israel in Brussels, Tomas Sandell, announced in a shocking video message on Thursday that German Chancellor Angela Merkel waged a campaign to prevent central and eastern European countries from moving their capitals to Jerusalem to preserve the Iran nuclear deal.

Sandell said in a Jerusalem Post exclusive report in November that Merkel called Romanian president, Klaus Iohannis, to convince him to not relocate his country’s embassy to Jerusalem. The move prompted him to go public.

Speaking from the European parliament, Sandell said, “What we have found out, something I heard for quite some time already, from central and eastern European countries that would have an inclination to move their embassy to Jerusalem, this is the natural thing for them to do, is that they have received phone calls from Berlin, from Angela Merkel, the chancellor. Basically, this cannot happen under any circumstances.”

In December 2017, President Donald Trump formally recognized Jerusalem as Israel’s capital and announced his decision to move the U.S. embassy to the holy city. “I have determined that it is time to officially recognize Jerusalem as the capital of Israel,” Trump said. “While previous presidents have made this a major campaign promise, they failed to deliver. Today, I am delivering.”

Merkel opposed the Trump administration’s decision at that time, saying, “We’re sticking to the relevant U.N. resolutions – they make clear that the status of Jerusalem needs to be negotiated as part of negotiations on a two-state solution for Israel and that’s why we want this process to be revived.”

Merkel’s frantic back-channel diplomacy is an apparent attempt to cull growing support for Trump’s embassy move in the countries of eastern Europe.

In November, the Jerusalem Post reported Merkel’s efforts to stop Romania from relocating its embassy:

In an effort to stop Romania’s government from relocating its embassy to Jerusalem, German chancellor Angela Merkel called Romania’s President Klaus Iohannis in April, urging him to stop Bucharest’s declared announcement to move its diplomatic building to Israel’s capital.

Merkel seeks to persuade European countries not to move embassies to Jerusalem. The German Chancellor, above all leaders, should not be conspiring against Jews in the 21st Century. But she prioritises appeasing Iran. https://t.co/oAqK8JW4C4

Penalizing Israel while placating Iran is Merkel’s way of filling the gap left by President Obama’s departure from the world stage. As Obama staffer Ben Rhodes wrote in his book earlier this year, Merkel admitted to Obama that “she felt more obliged to run for another term because of Mr. Trump’s election to defend the liberal international order (as paraphrased by the New York Times).” She is merely picking up where Obama left off.

Is the Frau doing this to keep Iran in the “deal”, or to try and keep the Muslims she imported to Germany peaceful and off the streets?

“She is merely picking up where Obama left off.”

I bet you can’t wait for Michelle to run for President.

notamemberofanyorganizedpolicital in reply to mailman. | December 4, 2018 at 2:40 pm

Everywhere she goes she’ll be followed by the loud chants of:

Merkel hitched her wagon to what she thought was Obama’s star. She deserves what she gets out of that.

It honestly doesn’t look like she’s going to get any negative rewards out of her deceitful disloyalty. An evil evil east German witch, destroying not only Germany but most of Europe.

I have been wondering if Macron really did fold his hand and leave the French presidency… If the ‘yellow shirt’ anarchists took over, would Germany invade? The world might owe the ‘yellow shirts’ a debt of gratitude, before exterminating them wholesale.

“thousands of Muslim demonstrators gathered at in central Berlin, chanting Arabic slogans calling for the killing of Jews”

Probably stood on the very spots once occupied by the Brownshirts chanting the VERY SAME THING,

The stains of Hitlers Germany will never go away. It is unsurprising that some Germans still harbor anti-Jewish and anti-Israeli attitudes. Hitler used that attitude to unite Germans behind his quest to concur Europe. Some Germans passed the sentiment on to their descendants. Even the French carry the stain to this day.

I do believe that West Germany was the first nation to recognize Israel as an independent nation shortly after they claimed independence.

Old Jerusalem has a lot of history inside its walls. Although it belongs to Israel, it does have a unique flavor of history, religion and varying cultures within it. The new, modern Jerusalem to the west of the Old City where our US Embassy is is clearly a Jewish city. All built since 1948. There’s no debating where the embassies should be located.

I do believe that West Germany was the first nation to recognize Israel as an independent nation shortly after they claimed independence.

Not possible. West Germany didn’t exist until more than a year after Israel did. In fact I think the first nation to recognize Israel’s independence was the USSR, which hoped that the communist Mapam party would have enough influence that Israel would align with it against the West.

What side is she on now? I seem to forget.

she felt more obliged to run for another term because of Mr. Trump’s election to defend the liberal international order (as paraphrased by the New York Times)

So, the “liberal international order” is about capitulation to Islam.

notamemberofanyorganizedpolicital in reply to tom_swift. | December 4, 2018 at 2:42 pm

And its about being good little Nazi.

iconotastic in reply to notamemberofanyorganizedpolicital. | December 4, 2018 at 3:19 pm

Naw, Merkel is a Marxist, not a Nazi. It is difficult to tell the difference since the two ideologies are so similar. But even though Hitler was a fan of genocidal Muslims i doubt he would have tried to destroy Germany by replacing the population with Arabs as Merkel has attempted.

“The Hun is always either at your throat or your feet….”

Could the contemptible irony, here, be any more glaring? Merkel’s own country and the rest of Europe are turning into a sharia-compliant, goose-stepping, dystopian nightmare, under the bootheel of cancerous Muslim jackboots and their predictible totalitarian urges, violence and belligerence. Europe is now a place where, 73 years after the defeat of National Socialism, synagogues must be placed under perpetual armed guard, and, Jews cannot walk around in religious garb, without fear of being attacked and/or harassed by the Muslim brownshirts.

Yet, rather than attempt to attend to this crisis (and, indeed, own up to her own role in creating it), Merkel is spending time and energy lobbying countries not to recognize Jerusalem as the capital of Israel!

This twit’s actions represent moral bankruptcy and fecklessness on a staggering scale.

Marxism, National Socialism, and Islam . . . an accursed trifecta forged in the infernal furnace of Jahannam itself . . . but surfacing in Germany.

Somehow, now that it’s happened, it doesn’t seem all that surprising.