Trump tweets: “Patrick has a long list of accomplishments while serving as Deputy, & previously Boeing. He will be great!” 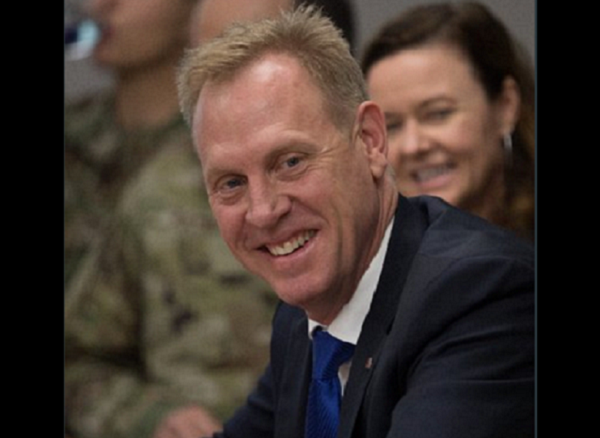 Earlier this week, Kemberlee blogged that Mattis was resigning at the end of February.  You can read his resignation letter here.

The timeline has been changed by President Trump, however, and now Mattis will be leaving his position as Defense Secretary as of January 1, 2019.  The current Deputy Secretary of Defense, Patrick Shanahan, will become Acting Secretary on January 1st.

President Trump announced Sunday that Defense Secretary James Mattis will be leaving the administration on January 1, weeks earlier than planned and just days after Mattis’ bombshell resignation letter made clear his policy disagreements with the White House.

“I am pleased to announce that our very talented Deputy Secretary of Defense, Patrick Shanahan, will assume the title of Acting Secretary of Defense starting January 1, 2019,” Trump wrote on Twitter Sunday morning. “Patrick has a long list of accomplishments while serving as Deputy, & previously Boeing. He will be great!”

In another tweet, President Trump made an interesting observation revealing his take on the policy differences between himself and Mattis.

It was not immediately clear why Mattis’ departure date was apparently moved up, but tension in the Defense Department and Washington generally has skyrocketed in the days since he suddenly announced his resignation. Shanahan is a former Boeing executive who joined the Pentagon in 2017.

Sources told Fox News this week that Mattis had quit “in protest” over the president’s national security policies and that more resignations could be coming. (In 2013, then-President Obama removed Mattis from his post running U.S. military’s Central Command, reportedly without calling to notify him of the decision.)

U.S. officials said this week that the Trump administration is making plans to pull all 2,000 troops out of Syria, and Trump later tweeted that “we have defeated ISIS in Syria, my only reason for being there during the Trump Presidency.”

Trump has stood by his Syria decision despite fierce blowback, telling detractors that the pullout should come as “no surprise” given his 2016 campaign promises and arguing that America’s role as “Policeman of the Middle East” is not worth the sacrifice.

Shanahan is a native of Washington state and has enjoyed a long career at Boeing before joining the Department of Defense.

. . . . As deputy defense secretary, Shanahan kept a picture of his father hanging on the wall of his office, just over his father’s Bronze Star.
Source: The Department of Defense

Over the years, he acquired a reputation as a sort of “Mr. Fix-It” within the company.
Source: The New York Times, Seattle Times, The Los Angeles Times

He rose to the rank of Boeing’s senior vice president of supply chain and operations.
Source: US Department of Defense

His political donations appear to have been fairly even-handed between the two major parties. Between 1990 and 2016, Shanahan donated $6,250 to Republican and conservative causes and politicians, and $5,000 to Democratic and liberal causes and politicians.
Source: Center for Responsive Politics

Congratulations @SpaceX and the @USAirForce on the successful launch this morning of a Falcon 9 rocket and a GPS satellite from @CapeCanaveralFL.

Our service members are doing so many cool and amazing things all over the world! pic.twitter.com/tR5PDfHEyO

Good. The Secretary of Defense shouldn’t be another general anyway, but rather a civilian to provide some oversight.

President Trump must have been really peeved at Mattis, and his letter, and who knows what else, to move up the resignation

I think it was the other way around, Mattis was thoroughly peeved with Trump. With good reason.

What is the “good reason”?

Was it because Trump refused to stay in the Paris Accords that Mattis favored?

Was it because Trump refused to stay in the Iran deal that Mattis favored?

Was it because Trump refused to keep troops in Syria that Mattis favored?

One or all of those?

to avoid mischief, it is better to remove causes quickly.

while Matisse might not intend to be a problem, his
remaining for an additional month would have kept the wagging tongues on the subject.

Was refreshing to have a SecDef who actually had experience in the military. Not some career bureaucrat or political hack like the majority have been of late. SecOff Mad Dog Mattis was amazing, sad to see him go.

The Left promptly lost their (censored) when this was announced, turning it into some sort of huge hissy fit by the president with a new guy rammed into the spot so Mattis could be thrown to the curb, etc, etc…

Sounds more like it would be a cleaner and less chaotic turnover if done at end of calendar year, so they went ahead and moved the date up.

Trump and Mattis answering questions about each other for two more months on the daily news wouldn’t seem to advance Trump’s agenda.

I love the Gen/Sec like a brother, but Trump was elected. Mattis was hired. Trump asked Mattis to follow a number of policy directions and by press accounts he could not. It was time to go.

According to reports, Mattis had been leaking to the press (this link is one example from April, but I remember reports speculating he was leaking back in 2017).
https://www.aol.com/article/news/2018/04/14/it-looks-like-defense-secretary-james-mattis-wants-the-record-to-show-he-urged-trump-to-be-cautious-with-syria-air-strikes/23411170/

People speculated Mattis may have written the much discussed anonymous Op-Ed that ran in the Washington Post about someone in the administration bragging about being part of the “resistance” who was plotting against Trump. Mattis denied he wrote it.

Bob Woodward reported in his book that Mattis said Trump had the intellect of a fifth grader. Mattis denied that, too.

It was gracious of Mattis to offer to stay until his replacement could be found and confirmed. But there is obvious tension between Trump and Mattis. Better to make a clean break.

It’s going to be interesting to see if Mattis, like Comey, cashes in making millions with a book deal. Or if he becomes a paid contributor on cable news. And if so, which cable channel.