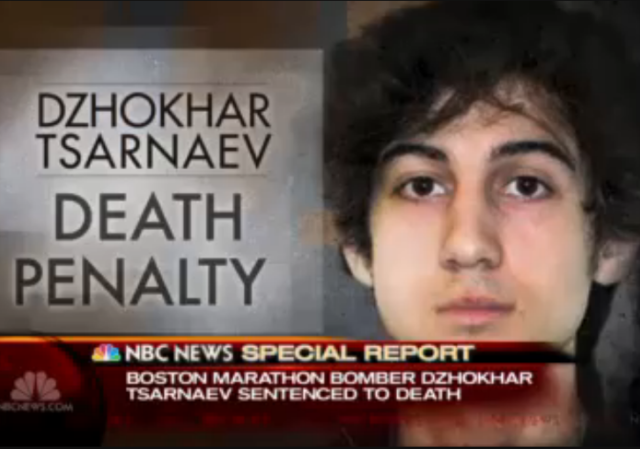 Lawyers for Boston Marathon bomber Dzhokhar Tsarnaev are appealing and trying to reverse his death sentence. They claim that he shouldn’t have been tried in Boston because the crime was too traumatic for everyone in the city to be objective.

Lawyers: Tsarnaev ‘should not have been tried in Boston’

Boston Marathon bomber Dzhokhar Tsarnaev’s appellate team presented their oft-delayed opening argument Thursday, urging sparing him a federal execution and allowing him to be retried for the 2013 Patriots Day terror attack that killed an 8-year-old boy and two women.

Their premise is summed up in the opening line: “This case should not have been tried in Boston.

“Forcing this case to trial in a venue still suffering from the bombings was the District Court’s first fundamental error, and it deprived Tsarnaev of an impartial jury and a reliable verdict, in violation of the Fifth, Sixth, and Eighth Amendments,” the brief states.

The partially redacted document filed in the U.S. Court of Appeals for the First Circuit spans 1,124 pages, nearly half of which is the 500-page opening brief alone.

Absent a new trial, Tsarnaev’s team is asking the Appeals Court to reverse his death sentence and order a punishment of life imprisonment.

Tsarnaev, 25, has been in solitary confinement at the federal Supermax prison in Florence, Colo., since his 2015 conviction.

Tsarnaev’s trial attorneys made repeated bids for a change of venue.

Tsarnaev will get no sympathy from Massachusetts residents, who still remember the horror of the bombing five years later. The term “Boston Strong” still carries powerful and common meaning in the Bay State.

Dan Glaun of Mass Live has more on the arguments being made by Tsarnaev’s legal team:

Attorneys for convicted Boston Marathon bomber Dzhokhar Tsarnaev say in his appeal that Tamerlan Tsarnaev was responsible for his little brother’s turn toward terrorism.

They argue that the federal judge in Dzhokhar’s trial wrongly prohibited them from introducing evidence about Tamerlan’s alleged role in a 2011 Waltham triple homicide.

“The appropriate sentence in this case turned, in large part, on a single question: Why did Tsarnaev commit these terrible crimes? He was a 19-year-old college sophomore, beloved by his teachers and friends, described as ‘kind,’ ‘hardworking,’ ‘humble,’ and ‘respectful’—captain of his high-school wrestling team and volunteer ‘Best Buddy’ to special-needs children. What turned him down this misbegotten path?” Tsarnaev’s attorneys wrote in the appeal.

The answer, they argue, was his brother Tamerlan, who was killed after being shot during a gun battle with law enforcement and then run over by an SUV driven by a fleeing Dzhokhar, according to federal prosecutors.

The jury on Twitter isn’t buying it. Here are some thoughts via Twitchy:

Wait, they didn’t use the glamour shot from @RollingStone?

strap a pressure-cooker full of nails to his back and tell him to run.

So in what jurisdiction, exactly, would Mr. Tsarnaev and his lawyers expect to have a jury of people who would NOT be outraged at someone exploding a pressure-cooker filled with shrapnel in the midst of their fellow Americans?

I rather shudder at the proposed answers to that question.

It’d be a shame if somebody planted an IED under the sidewalk.

Now there is a face (Lindh’s) that would be vastly improved by a bullet hole in his forehead.

“So in what jurisdiction, exactly, would Mr. Tsarnaev and his lawyers expect to have a jury of people who would NOT be outraged at someone exploding a pressure-cooker filled with shrapnel in the midst of their fellow Americans?”

He could hide the bomb under a big pile of poo, or in one of those tents that line the sidewalks…clean the place up a little.

There are a number of jurisdictions that would have been acceptable. Tehran, any court in Syria, Cuba, etc. etc. etc.

I understand the lawyers are just doing their jobs but it sounds weak. They’re saying that in a city of more than a half million people, NO ONE was able to be objective and, anyway, it’s all the dead guy’s fault.

If that fails, they’ll resort to “the stars were misaligned.”

This zero is still around?

So get on with it, already.

So, let me see if I’m following the defense arguments correctly.

First they are claiming that Tsarnaev was only convicted of committing this crime because the trial was held in Boston. Then the defense specifically acknowledges that he committed the crime, but only because he was seduced into committing it by his older brother. The second defense is the classic incompetent boob defense. The first defense is totally undermined by the introduction of the second defense, that Tsarnaev was simply an incompetent boob, WHEN he committed the offense.

Good luck with that appeal.

I say his death sentence is settled law. And I say the hell with him.

Try him again where I live. He would still get
The death penalty.

From the 6th amendment: “the accused shall enjoy the right to a speedy and public trial, by an impartial jury of the State and district wherein the crime shall have been committed”

Unfortunately this guy will never get the death penalty.
Send him out to the supermax and try to forget about him.

I think they did shoot him, just didn’t aim very well.

We need the death penalty so politicians like Obama and BJ Clinton won’t be able to pardon climinals like this guy for political gain.

Be careful what you wish for. I suspect death is more pleasant than life in the supermax….

If so then why is almost every death penalty case appealed right up to the time of execution and never has someone sentenced to life appealed for the death penalty instead?

While I agree with the generality, I’m sure there have been notable exceptions… Gary Gilmore, Tim McVeigh…

Was there an original request for change of venue?

Yes, his lawyers did request a change of venue for the original trial. They were heard at the United States Court of Appeals for the First Circuit.

Thank you. Sounds as though they may have some basis for their argument.

Really? They should have tried him, sentenced him, denied his appeals and hung him the same day.

He killed and maimed people. Why isn’t he dead already?

The defense had the opportunity before the trial to request a change of venue, and did not do so.

His attorneys should win the chutzpah of the year award.

Perhaps he should have been tried at Gitmo.

Now, had he been an employee of Debbie Sargent Schultz or Bob “anthrax” Mueller, then he would have options here.