That mythical gender “weekly earnings gap can be explained by the workplace choices that women and men make.”

Not that it matters to the left, but a study from Harvard University titled Why Do Women Earn Less Than Men? proves the gender wage gap is indeed a myth because of the obvious reasons: work choices between men and women.

Why do men make more than women? Their choice of jobs and working a lot of overtime.

In order to prove their point, authors Valentin Bolotnyy and Natalia Emanuel looked at the Massachusetts Bay Transportation Authority (MBTA). It is unionized, which means men and women are treated the same and have to follow the same rules and receive the same benefits. So why do the men earn more?

From the study’s abstract (emphasis mine):

Even in a unionized environment where work tasks are similar, hourly wages are identical, and tenure dictates promotions, female workers earn $0.89 on the male-worker dollar (weekly earnings). We use confidential administrative data on bus and train operators from the Massachusetts Bay Transportation Authority (MBTA) to show that the weekly earnings gap can be explained by the workplace choices that women and men make. Women value time away from work and flexibility more than men, taking more unpaid time off using the Family Medical Leave Act (FMLA) and working fewer overtime hours than men. When overtime hours are scheduled three months in advance, men and women work a similar number of hours; but when those hours are offered at the last minute, men work nearly twice as many. When selecting work schedules, women try to avoid weekend, holiday, and split shifts more than men. To avoid unfavorable work times, women prioritize their schedules over route safety and select routes with a higher probability of accidents. Women are less likely than men to game the scheduling system by trading off work hours at regular wages for overtime hours at premium wages. These results suggest that some policies that increase workplace flexibility, like shift swapping and expanded cover lists, can reduce the gender earnings gap and disproportionately increase the well-being of female workers.

Overtime pays time-and-a-half. The authors found that men train and bus drivers accepted overtime more than their women counterparts by 83%. These males twice as likely took overtime than the females. Men accepted scheduled overtime scheduled three months in advance 7% more than the women.

As women moved up the food chain and had the opportunity to prioritize their schedules, the majority of them “moved away from working weekends, holidays, and split shifts more than men.”

Bolotnyy and Emanuel wrote that the evidence they discovered “so far on the earnings gap in our setting suggests that insufficient flexibility and high female values of time outside the workplace are its root causes.” 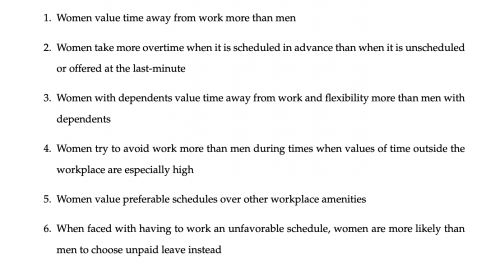 John Phelan, an economist at the Center of the American Experiment, provided an excellent analysis of the study. The gender wage gap came to light due to a dumb methodology that ignores basic observations (emphasis mine):

It ignores the fact that according to the Bureau of Labor Statistics (BLS), in 2017, men worked an average of 8.05 hours in an average day compared to 7.24 hours for women.

True, women are more likely to be raising children, taking care of elderly family members, or doing housework, leaving them with fewer hours in the day for paid employment. But this does not alter the essential fact: that people working fewer hours, on average, can be expected to earn lower incomes, on average.

Let me repeat: When you work fewer hours, you will make less than what others make who work more hours.

This led Phelan to conclude that this “‘gender wage gap’ is as real as unicorns and has been killed more times than Michael Myers.”

We can rehash the same ground as often as we like. The issue is that the “gap” is an article of faith for the true believers, and facts won’t change their minds.

They have no choice but to worship this false idol. They have come too far. If they accept that the higher pay is due to the hours worked, which are determined in great part to the choices the workers maker for themselves, then it is a short step to believing that the overall success in life is linked to the amount of effort one puts into that life. Again, choices.

And that shoots holes in all the affirmative action, preferential hiring and promotion based on gender, skin color, whatever, programs they have devised to get what they want without actually earning it.

This would be a good place to mention the story of “The Grasshopper and the Ants”, but it would be somewhat off topic. But I fear that the grasshoppers have reached numbers where its no longer possible for the ants to support them all….

If feminists really wanted to close the gap, those making the least amount of money would just identify as men. This would have the dual benefits of raising women’s mean earnings while simultaneously lowering men’s.

The perception of a gap = political power and capital. No way they want to close it.

UnCivilServant:
The saying, “You cannot reason a man out of what he never reasoned himself into,” applies here. (Attributed to Jonathan Swift, although his actual phrasing was a bit different.)

The “gender wage gap” – describing employers paying women less for equal duties and equal work – is a myth. It’s unsupported by facts; the pay gap does exist, but is sufficiently explained by differences in work habits between males and females as to become meaningless. It’s perfectly innocent; there’s no “conspiracy” to promote fewer women to high-paying positions, nor is there wide-spread gender-based wage discrimination – both of which are central tenets of the belief.

But because it’s become an article of faith, the myth persists in the face of facts.

Faith cannot be reasoned with. Thus, because Leftists’ opinion on the “gender gap” was not born of reason, it cannot and will not be defeated by reason. You can’t reason someone out of an opinion they didn’t reason themselves into.

Wondering how this will shake out with the mandatory placement of a female on board of directors for large companies in California? How many Ocasio-Cortez types types think that the board room is just 5 years or less away from graduation with that super economics degree in social jystice?

A political myth with a universal (e.g. out of frame/context) character, that progresses because it is politically congruent (i.e. profit, leverage).

Thomas Sowell explains it the best 🙂

Everyone should check out Chrstian Hoff Sommers – The Factual Feminist. She takes reports directly from the Media and disproves them with facts. And, yes, she is a Feminist.

Strictly scientifically speaking, the authors shouldn’t try to assume their subjects’ values using statements like, “Women value time away from work and flexibility more than men….” Values are purely subjective; science is not.

However, their objective points are perfectly valid: female workers tend to work less overtime, work fewer holidays and swing shifts (with whatever extra compensation that entails – see below), and take more unpaid time off than their male counterparts. Thus, even with identical tasks, identical wages, and identical benefits, a “gender gap” still exists, but it’s a 100% voluntary one.

It may be irrelevant based on MBTA’s policies, but some employers offer a pay differential for holiday and swing shifts. I’ve worked multiple places where holidays are already paid, and if you have to work, any hours worked are added on top of the 8-hour holiday pay (basically, you get your 8 hours of holiday pay at the normal rate, plus whatever you work at the overtime rate). Night and swing shifts might get an extra differential rate above “normal” wages, too.

Needless to say, in my experience those shifts were covered predominantly – but not totally – by single males without children. And no, the goal wasn’t necessarily to “game the system” (although that was pretty easy to do and a few people did, including some women); even if the extra cash was nice, most of those folks were just trying to build reputations for themselves and earn experience – and promotions. The employer required 24/7 operations and was willing to compensate extra for “undesirable” shifts; it was mutually beneficial. So why not?

Strictly scientifically speaking, the authors shouldn’t try to assume their subjects’ values using statements like, “Women value time away from work and flexibility more than men….” Values are purely subjective; science is not.

To all but the most obtuse individuals, the reaction to this article is a resounding NO DUH!

“Unequal pay” is simply a device for creating resentment in women against men. For some reason the Socialists believe they can control us by making enemies of men and women.

Gender is just a social construct anyway, no?

Everything, including the pay gap, is what the crazies say it is.

It is critical to men to be able to earn enough to support a family. For many women their job is “extra” pay and they want flexibility to be able to be with their kids, which I think is great. Men therefore commute farther, accept more hazardous jobs (98% of workplace fatalities) which pay more, work longer hours, travel more. Most men are just fine with their wife staying home, esp if kids are there. Women also choose professions that are less strenuous/demanding so they are not exhausted when they get home. Feminists want women to want to be men, but most do not want that.