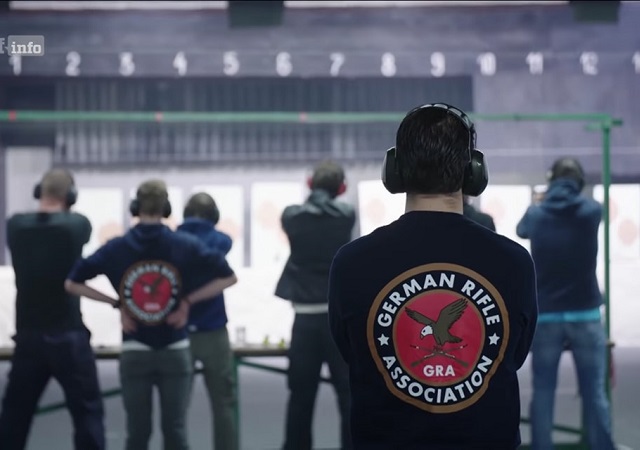 The number of weapon permits in Germany is soaring to record heights since Chancellor Angela Merkel opened the country’s borders to migrants in the spring of 2015. German authorities issued 600,000 basic weapon licenses since 2014, an increase of 130 percent, figures published by the German state broadcaster Deutsche Welle show.

The surge in weapon ownership reflects the waning public confidence in the German government’s ability to protect ordinary citizens.

Following the mass sexual assaults on women in Cologne and other German cities on the 2015 New Year’s Eve, many Germans have lost their faith in the state and law enforcement when it comes to tackling migrant crime. “Rising perceptions of insecurity have been cited as a key factor in the increase in issued licenses,” the broadcaster reported.

“We must be careful not to get American conditions in Germany,” said Jörg Radek, deputy chairman of the German police union, while referring to the growing number of Germans making use of their right to bear arms.

Germany witnessed a sharp rise in crime rates in the wake of unregulated migration since 2015. Between 2015 and 2016, the number of immigrants charged with crimes rose by over 50 percent, according to the reports published by the Ministry of Interior. The German police statistics show a steady increase in the rate of violent crimes — namely murder, stabbing and sexual assault — involving migrant perpetrators ever since.

The threat faced by the ordinary Germans is not limited to violent crimes alone. The country has been hit by a series of deadly Islamic terror attacks perpetrated by newly-arrived migrants from the Arab and Muslim countries.

Germany has issued nearly 600,000 basic weapons licenses, representing an increase of 130 percent since 2014, according to figures published on Friday by Redaktionsnetzwerk Deutschland (RND), which supplies a number of German dailies with content. In 2014, only 261,332 licenses were in use.

With the license, Germans can carry gas pistols, flare guns and other weapons not intended for deadly use.

The rise has been partially attributed to a growing sense of public insecurity, most notably with an increase in terror attacks on European soil since 2015.

The rising migrant crime wave coincides with European Union’s efforts to prevent the European citizenry from owing weapons. Last year, EU tightened the existing regulations on sales and possession of firearms, making it harder for law-abiding Europeans to buy and possess weapons. “The new Firearms Directive provides for more rigorous controls on the acquisition and possession of firearms,” a European politician said following the adopting of EU-wide guidelines in April 2017.

Not just the EU establishment, the German left is worried about the surge in gun sales as well. “More private weapons do not create more security,” said Irene Mihalic, a spokeswoman for Germany’s Green Party. “On the contrary, they have the potential to escalate conflicts into violence.”

The EU establishment is rightly fearful of a popular backlash against its globalist policies. The EU diktats continue to sweep away the policies and laws put in place by the elected national parliaments. While the EU elite have mastered the art of political power-grab through treaties and fiats, they have not been successful in stifling popular resistance as displayed by the Brexit vote and the subsequent rise of anti-establishment parties across Europe.

When government fails, citizens do what they must.

We just had a HUGE Gun Show in my county this week-end and the place was packed.

It was Christmas. It was beautiful. It was pure love.

I bought another AR-15 ASSAULT rifle, which I nick-named THE OBAMA (all of my GUNS are named..it is a man thing).

I recommend all of you to buy as many weapons and as much ammo as you can, while you still can, especially before they “register” ammo purchases and add that information to your surveillance file.

It stores well and will be worth a fortune when everything explodes…………soon.

“With the license, Germans can carry gas pistols, flare guns and other weapons not intended for deadly use.”

I would never shoot anyone with a weapon specifically designed to be non-lethal. It might very well anger them enough to take it away from me and beat me to death with it!

Beat them to death first.

There is a waning confidence in government and law enforcement here as well. “stand down” orders in Portland and Baltimore come to mind.

But the scum of the Earth has flocked to Congress.

…whenever any Form of Government becomes destructive of these ends (life, liberty, and the pursuit of happiness), it is the Right of the People to alter or to abolish it, and to institute new Government, laying its foundation on such principles and organizing its powers in such form, as to them shall seem most likely to effect their Safety and Happiness.

A violent crime wave, coupled with governmental refusal to address grievances of the citizens and also efforts to disarm law-abiding citizens, is grounds for alteration or abolishment of the government.

This may require violence.

“We must be careful not to get American conditions in Germany,” said Jörg Radek, deputy chairman of the German police union, while referring to the growing number of Germans making use of their right to bear arms.

I’d be a lot more worried about getting caliphate conditions in Germany. Just sayin’.

That fool Radek has forgotten German history, and he is now doomed to repeat it – in reverse.

Not if they get another Leader:

Unfortunately, the leftist mind is sometimes very predictable. Merkel will blame the rising crime rate on the rising ownership of guns, which (of course) only reflects the racism of the common people. The government response will be to try to take away the guns.

It’s not that the German government can’t protect it’s people…it’s that they have chosen not to….choosing instead the invading hordes over it’s own citizens…and the people of Germany are slowing waking to that reality

One needs to look deeper into this and discover WHO and WHY this is being done.

It is all there.

Reminds me a bit of the old joke about the definition of a conservative being a liberal who was mugged the night before.

I’m afraid this article may mean less than it appears.

Germany has issued nearly 600,000 basic weapons licenses, representing an increase of 130 percent since 2014 . . . With the license, Germans can carry gas pistols, flare guns and other weapons not intended for deadly use.

“Basic weapons license” doesn’t mean anything. The Keiner Waffenschein is the German “small” weapons permit. That’s the one about gas pistols, flare guns, and similar things which aren’t really weapons at all. The license for real firearms is the Waffenschein, which is an approximate equivalent to a typical American LTC in a “may-issue” state. Note that it may be impossible for anyone except security guards, politicians, and rich celebrities to get this license.

If the issue of “small” weapons permits has increased, nobody will ever notice. That stuff isn’t weaponry, no matter how many definitions the Germans make up.

I think you’re right that he meant, “Kleiner Waffenschein,” but “Keiner” as in “No Weapons License” is more accurate. 🙂

So, how many people were denied?

Really, on should track how many citizens are deined a form of self-protection they think they need. That’s a cost, n’est pas?

The problem is caused by politically incongruent reporting.

Mein herrs: you are aiming the guns in the wrong direction: nowhere down that range is angela merkel, nor any of her confederates.

“We must be careful not to get American conditions in Germany,” said Jörg Radek, deputy chairman of the German police union, while referring to the growing number of Germans making use of their right to bear arms.”

@irv: No government can protect its people. That’s a fallacy. There are millions of crimes in this country alone annually. The police don’t prevent crimes because they don’t exist in the numbers necessary to do so. They respond to crimes during or after they’ve been committed. The number of victims (alive and dead) of crimes vastly outweigh the number of people saved.