The shooter is Cherif Chekatt. 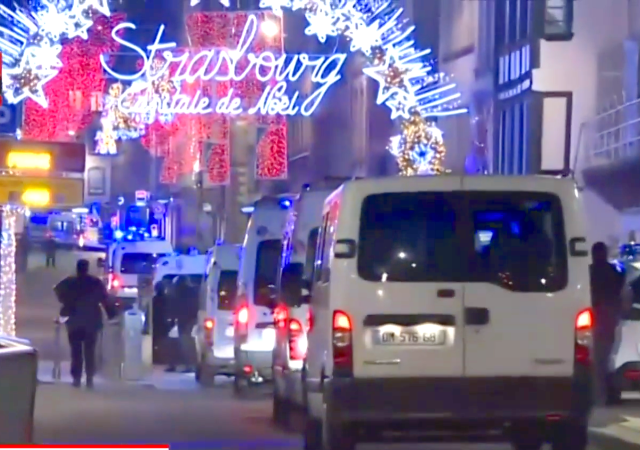 He killed four and injured several others in Strasbourg on Tuesday evening.

Senior Interior Ministry official Laurent Nunez said Chekatt had been radicalized in prison and had been monitored by French intelligence services since his release from jail in late 2015, because of his suspected religious extremism.

Nunez, secretary of state for the Interior Ministry, said on France-Inter radio that police sought to arrest Chekatt on Tuesday morning, hours before the shooting, in relation to an attempted murder. He was not at home but five other people were detained, authorities said.

The government raised the security alert level and sent police reinforcements to Strasbourg, where more than 350 security forces were involved in the massive manhunt. Police officials said he was wounded in a gunfight with soldiers after the Tuesday night attack but escaped, and a top official said he might have fled to neighboring Germany.

The shooting started at 8PM local time at a Christmas market, but “unfolded on different streets in the city.”

French officials report 2 have died and 8 are wounded after a shooting in Strasbourg. https://t.co/RL5LdygYti pic.twitter.com/OQG7m8yKHY

#Strasbourg French reports that gunman started attack from Pont Corbeau and straight down place Gutenberg/Grande Arcades. 12 total shot 2 dead. Assess jihadist “run-and-gun” attack. One turn to the right would have put him in the insanely tight packed Cathedral Mkt. pic.twitter.com/pglJrJLD05

The authorities have identified the man, but did not release his name. He has a criminal record and “had been flagged as a suspected extremist.”

France 24 said the police records on the suspect is an S file for security risk, which means “he was considered as posing a serious threat to national security.” It’s the highest warning level in France and allows the authorities to place the suspect under surveillance.

Witnesses said he had fired a first series of rounds near the market around 8pm then a second round a few metres further on.

“There were gunshots and people running everywhere,” one local shopkeeper told BFM TV. “It lasted about 10 minutes.”

Two of the injured were said to be in a critical condition.

The public prosecutor declared the incident to be “terrorism” and announced an inquiry had been opened into “assassination and attempted assassination”.

France’s interior minister, Christophe Castaner, said the gunman “has been identified” and was known to police who were searching for him.

The centre of Strasbourg went into lockdown as police asked residents to stay home and restaurants were ordered to close and not let customers leave.

The European Parliament, which is currently sitting in Strasbourg, was put on lockdown, and the parliament’s safety awareness division sent a message to MEPs advising those dining in the city centre to “please stay inside and don’t go out”.

“He has a criminal record and “had been flagged as a suspected extremist.””

That’s DOG WHISTLE for ‘mental illness.’ Move along. Nothing to see. Besides, the ruling elites are busy repressing the yellow jackets.

Prayers for the survivors and families who have to deal with the idiocy of their ‘leaders’ on top of madness such as this.

As Basil Fawlty would have said, “Don’t mention Islam, Muslims, or the 1400 Year Ongoing War of Jihad.”

Not too subtle reminder to the dhimmis that this is now Muslim lands. Abandon Christmas, embrace segregation, submit to Islam or continue to feel the consequences.

Oh…. and it didn’t really happen as only the USA has “needless gun violence”.. except this wasn’t “needless” if you believe in Islam.

Yeah, doesn’t really fit the narrative does it? Had this happened in many US cities, the rabid mongrel would have been hunted down and exterminated by the armed populace. That’s what you might call “needful gun violence.”

An unarmed populace, a flagged security risk who obtained a gun in a severely gun controlled country, and cops not close enough to catch the guy in the area, but they know who he is. This story is such a broken record…

The vaunted gun control laws become porous in reality… but such deaths are acceptable since at least they “tried” in passing them. The “meek” shall inherit the world… not the weak and helpless..but since that is found in a (non-Muslim/non-Satanic) religious text it must be squashed by the Left.

I wonder if “lockdown” ever makes anything better.

It certainly didn’t at Virginia Poly in 2007.

I suppose it sounds like a good substitute for more effective action.

Y’all know that the French government is trying to find a way to enlist their Muslim masters into open warfare against the Gilets jaunes on behalf of the State. Something about being eaten last by the crocodile.

The quote you were referring to :

“An appeaser is one who feeds a crocodile, hoping it will eat him last.” —- Winston Churchill

France, you are reaping what you have sown.

We, on the other hand, elected Donald Trump.

If only someone could have predicted this.

Pity the poor French, German, and British police. They know who the terrorists are, but can’t touch them because they are members of a protected class: “Muslim Terrorists”.

It is not just with the terrorists we see this insanity. Here in Europe it seems to be a point of pride that murders, rapists, burglars, child molesters, etc… (and terrorists) are allowed to roam free in the streets instead of being incarcerated in large numbers in prisons like the USA.

The hope is that la dolca vita finally kicks in and the criminals and terrorists will confirm to the EU ethos. The quickest way to reduce crime is to not call it crime.

(It’s interesting that in the USA Eli Whitney isn’t castigated as the most evil white man in history. Without him slavery dies, there is no Civil War, crime would be reduced over 50% and national debt would be almost zero (discounting pension bomb).)