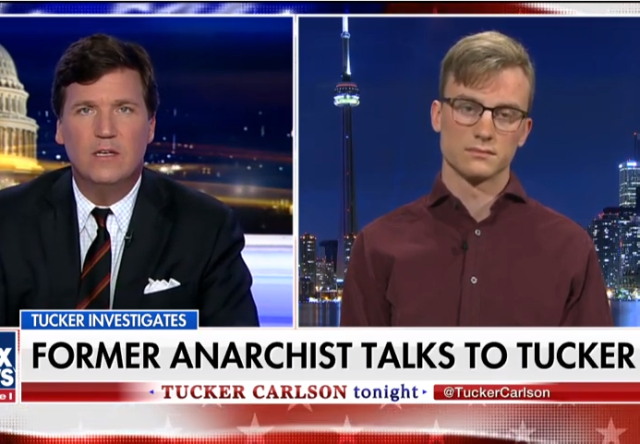 A young man named Conor Barnes appeared on the Tucker Carlson show on Friday night. Barnes is a former anarchist who lived among a community of Antifa style activists but eventually left that life behind.

He described life on the far left as being almost ‘faith based’ in that everyone knew what was wrong with everything. His own indoctrination came through being a sad teenager who was looking for answers, which he claims led him to radical literature that taught him capitalism keeps everyone down.

The interview provides a fascinating window into the mind of the far left. Watch:

As Tucker mentions in the video, he learned of Barnes through an essay he recently wrote for Quillette. Here are some highlights:

When I became an anarchist I was 18, depressed, anxious, and ready to save the world. I moved in with other anarchists and worked at a vegetarian co-op cafe. I protested against student tuition, prison privatization, and pipeline extensions. I had lawyer’s numbers sharpied on my ankle and I assisted friends who were pepper-sprayed at demos. I tabled zines, lived with my “chosen family,” and performed slam poems about the end of the world. While my radical community was deconstructing gender, monogamy, and mental health, we lived and breathed concepts and tools like call-outs, intersectionality, cultural appropriation, trigger warnings, safe spaces, privilege theory, and rape culture.

What is a radical community? For the purposes of this article, I will define it as a community that shares both an ideology of complete dissatisfaction with existing society due to its oppressive nature and a desire to radically alter or destroy that society because it cannot be redeemed by its own means. I eventually fell out with my own radical community. The ideology and the people within it had left me a burned and disillusioned wreck. As I deprogrammed, I watched a diluted version of my radical ideology explode out of academia and become fashionable: I watched the Left become woke…

Deep and sincere engagement with opposing points of view is out of the question. Radicalism is like a clan too suspicious of outsiders to abandon cousin marriage, and, like incestuous offspring, radicalism’s intellectual offspring accumulate genetic load. Narrow theories must perform increasingly convoluted explanations of the world…

It’s not a short essay but it’s worth your time.

Quillette is my new favorite blog. In reading the article referenced above, learned some new and apt terms. OFFENCE ARCHAEOLOGIST and KAFKATRAPPING http://esr.ibiblio.org/?p=2122

Your “new favorite blog”, eh? Well, that seems rather telling. Quite the curiously emphatic endorsement there. By the way, that “Kafkatrapping” [typically and more commonly known throughout the ages as “logical fallacy“] article you reference at the alternative reality blog you linked to is old news, nearly 10 years old news in fact.

And, Sydney, Australia based “Quillette” is an ‘alternative Leftist’ Libertarian-leaning blog for the self-described ‘reactionary intellectual’ that has also notably won high praise from the likes of Canadian Steven Pinker and Britain Richard Dawkins – both of whom are well known and unwavering ‘celebrity’ hardcore atheists. Quillette certainly seems to be uniquely British Empire affiliated, but it’s getting its claws into the USA now it seems – so there’s that.

At least Quillette isn’t exactly anti-capitalism though. After all, Washington Post owner Jeff Bezos’ Amazon and Amazon affiliates help finance the blog. Otherwise, it seems mostly patron financed, and I’d love to see who some of Quillette’s more notable patrons are – but I guess you can’t. ¯|_(ツ)_/¯ https://www.patreon.com/Quillette

This guy could have been writing about what it felt like to leave the Manson Family.

“Deep and sincere engagement with opposing points of view is out of the question.”

“Radicalism [NeverTrumpism] is like a clan too suspicious of outsiders to abandon cousin marriage, and, like incestuous offspring, radicalism’s intellectual offspring accumulate genetic load.”