Political operatives went door to door to revoke signatures he needed to get on the ballot . . . Chicago style. 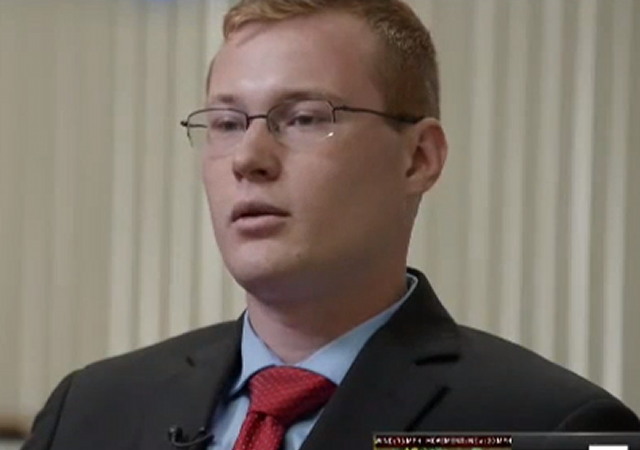 A student at DePaul University decided to run for political office this year. He set his sights on an alderman seat in Chicago which hasn’t been challenged since 1991.

He soon learned that the Chicago machine wasn’t going to give up its power easily, even if that meant resorting to fraud.

It’s overkill of epic proportions, like using a sledgehammer to kill a gnat, or firing off a nuclear weapon to kill a sparrow. A Southwest Side David vs. Goliath story.

The David is David Krupa, 19, a freshman at DePaul University who drives a forklift part time. He’s not a political powerhouse. He’s just a conservative Southwest Side teenager studying political science and economics who got it in his head to run for alderman in a race that pits him against the most powerful ward organization in Chicago.

The Goliath is the 13th Ward Democratic Organization run by House Speaker Michael J. Madigan, aka Boss Madigan, the most powerful politician in the state. Boss Madigan has long hand-picked his aldermen. He likes them loyal and quiet. The current silent alderman of the 13th Ward is Marty Quinn.

Krupa did what he was supposed to do to get on the ballot. Then the machine undid it all:

To get on the ballot, Krupa was required to file 473 valid signatures of ward residents with the Chicago Board of Elections. Krupa filed 1,703 signatures.

But before he filed his signatures with the elections board, an amazing thing happened along the Chicago Way.

An organized crew of political workers — or maybe just civic-minded individuals who care about reform — went door to door with official legal papers. They asked residents to sign an affadavit revoking their signature on Krupa’s petition.

Just so we’re clear, this was reportedly done fraudulently:

Mike Krauser of WBBM Radio has more on this:

Krupa said opposition political operatives were pounding the pavement and pressuring people sign affidavits revoking their signatures, whether they signed his petitions or not.

“I think they told their precinct captains, ‘go out there and get as many of these things as you can by any means necessary,’ and sometimes that means lying to people,” Krupa said.

“We filed 1,1703 signatures, but the revocations alone that they filed, before we even filed our petitions, numbered at 2,796, and out of that number only 187 are actually out of our petitions.”

Where are all the Democrats who so frequently emphasize the importance of young people getting involved in politics? It looks like that commitment has some limits, namely not interfering in districts where Democrats have a nearly permanent hold on power.

Here’s a video report on Krupa’s candidacy by NBC 5 in Chicago:

Featured image is a screencap of NBC 5 Chicago video.

Nice house you got there. It’d be a shame if it burned down. Here…sign this.

Don’t be like Nixon not fighting back at Chicago, Illinois fraud machines. If Nixon had fought back, world history would be entirely different, for the better. You may not have that great an impact, but you could be the start of something just as big.

A job worth doing is worth doing well. These Chicago electoral mafia types (just cogs in the machine) were faced with a kid who had received 1700 signatures to get on the ballot. They went out and had the 1700 signers “revoke” their signatures–and then for good measure went out and got an additional 1,000—who had never signed the kid’s petition, to “revoke” the signatures they never gave.

They were confused–they are usually sent out to collect some ballots and votes that were never cast.

Worse than that, only 187 of the revocations were from people who actually gave signatures.

They didn’t know who the signers were, because he hadn’t filed them yet (clever boy). So they just got as many people as possible to revoke. Is it perjury? Only if it says explicitly that “I signed his petition”. If it says “I may have signed his petition, I don’t know, but if I did then I’ve changed my mind and hereby revoke it” then they’re in the clear.

Even if they swore they did sign his petition, they could either claim it was an honest mistake, or they could claim that they did sign and he deliberately threw away their signatures after having learned that they’d signed the revocation.

‘Democracy now!’ Except when its not wanted.

““So, what about the 2,609 people who didn’t sign for David but who filed revocations? That’s fraud. That’s perjury. That’s felony.””

Uh, ok. So what? No one will be prosecuted; nothing will change; and Democrats will still scream there is no election/voter fraud.

So did they keep him off the ballot?

Evidently not, since he only needed 473, and filed 1516 that hadn’t been revoked. Challengers will now have to find something else wrong with 1044 of them.

As Abner Mikva found out In 1948 when as a University of Chicago law student he stopped at a Democrat committeeman’s office to volunteer to work for Adlai Stevenson and Paul Douglas:

In Chicago, “We don’t want nobody that nobody sent.”

I call shenanigans. Everyone knows you can’t vote or sign petitions in Chicago unless you’re dead.