Christina Sommers points out the “Central fallacy of intersectional feminism: It fights racism and sexism by rigidly categorizing everyone by race and sex” 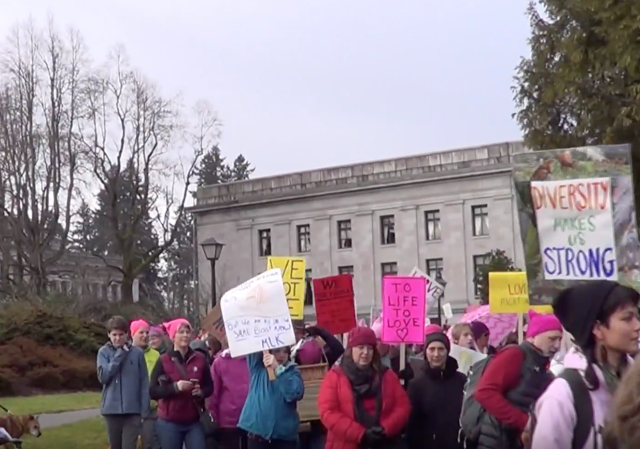 We’ve been covering the Women’s March here at LI since its inception, including its January 2017 exclusion of pro-life feminists, and have been closely following revelations of the group’s rampant anti-Semitism.  From closed chapters to cancelled marches and lost sponsors, the Women’s March is flailing due to its leadership’s associations with and defense of vile anti-Semite Louis Farrakhan.

It seems that anti-Semitism is not the group’s only problem: the California Women’s March scheduled for next month has been cancelled because leadership fears it will be “too white.”

The organizers of the annual Women’s March have decided not to hold a rally in Eureka on Jan. 19, as previously planned, because they say participants do not represent the diversity of the area.

“This decision was made after many conversations between local social-change organizers and supporters of the march,” organizers said in a press release.

. . . . “Up to this point, the participants have been overwhelmingly white, lacking representation from several perspectives in our community,” the press release went on to say.

“Instead of pushing forward with crucial voices absent, the organizing team will take time for more outreach. Our goal is that planning will continue and we will be successful in creating an event that will build power and community engagement through connection between women that seek to improve the lives of all in our community.”

The move was immediately criticized by both Women’s March supporters and detractors.

The announcement was met with criticism from some social media users.

“I was appalled to be honest,” Amy Sawyer Longwrote on Facebook. “I understand wanting a diverse group. However, we live in a predominantly white area…not to mention how is it beneficial to cancel? No matter the race people still want their voices heard.”

David Holper added: “I was really saddened to hear that the march won’t be happening this year. Isn’t there still time to reach out to minority groups and pull this together?”

PROOF OF WHAT A SCAM THIS IS…Organizers cancel Women's March Jan. 19 due to 'overwhelmingly white' participants https://t.co/jvcHrs68Oi

Anti Semitism was fine, but they had to draw the line somewhere.

Central fallacy of intersectional feminism: It fights racism and sexism by rigidly categorizing everyone by race and sex. Try humanism instead. See: https://t.co/2VqUf74mwM

Political Correctness is now preventing Liberals from protesting. We need to figure out how to use this to our advantage.

There an old saying that goes something like, “When your opponent is self-destructing, don’t do anything to interrupt it.”

They have overestimated themselves and got so cocky, they believed they could openly show their bigotry and get away with it.

They even thought they could trot out Hitler-Cortez and woo the nation off its feet with her stupidity.

So far, not enough Jews in America are suicidal. (But they’re getting there. Right, Norman Lear and friends?)

Sorry Rick, you must now denounce yourself.

You made the invalid assumption that only males have cocks!

Obviously, the Black Women, & Men, Are much more Patriotic, & intelligent, than the ‘WHITE’S? HERE, is “proof” of what i been “blogging”, continuously………The liberization of “CALIFORNICATION”, has gone “over the top! There is no longer any sanity in the Demonrat Party! It’s all about “HATE…..HATE…..HATE, TRUMP, & No longer any Legislation going to happen for 2 more years! The Liberals, in this country, no longer care about America, Our American people, &/or the Constitution…It’s all “SELF, SELF, SELF,, ME, ME, ME……Are we getting tired of this yet?

“… the participants have been overwhelmingly white, lacking representation from several perspectives …”

Liberalism at its finest.

VERY GOOD…..EXTROADINARY! THIS IS A VERY INTELLECTUAL POSTING…….IT IS “SO” THAT WAY…..lIBTARDS, WILL DECIPHER THIS AS “CODE”, AS THEY AREN’T INTELLIGENT ENOUGH TO UNDERSTAND WORDS LONGER THAN 4 OR 5 LETTERS!

Useful idiots who will be purged should the antifa and their ilks take over.

Well. I’m overwhelmingly white, and I had no plans to show up. Good thing, too.

They canceled it because they were outed as a mob of Jew-haters. They didn’t plan on that leaking out – and if it did, not enough people would care.

What scum – GOPe aside – has infested our country’s political system.

White women you are next! Too late…you got exactly what you asked for from these bigoted fools.

Which is 26% containing the ‘diversity’ that the organizers sought. Apparently, most of this 26% non-participant crowd had better things to do with their time. The organizers might want to inquire into what those things are…?

The 21st century compromise: perhaps they could put in their charter, “A white person shall count for three fifths of all other Persons”?

But once this is implemented, how much shall a man who claims he’s a woman yet is biologically male be counted (for purposes of enumerating how many women actually marched in a women’s march)?

While the feminist movement was originally designed to address inequities in the treatment afforded the sexes, it went the way of the civil rights movement and became a vehicle to elevate women to a superior status, in our country, and allow for the enrichment of its leadership. It is amazing that all of these “equality” movements are not interested in equality at all, but in establishing dominance for the group which it purports to represent. Now, it is being used to advocate for specific groups and classes of women, at the expense of other groups and classes of women. I am happy to see it collapse, just as I would be happy to see the racial grievance industry [aka civil rights movement] collapse. Both have not only outlived their usefulness, but have become horribly corrupt.