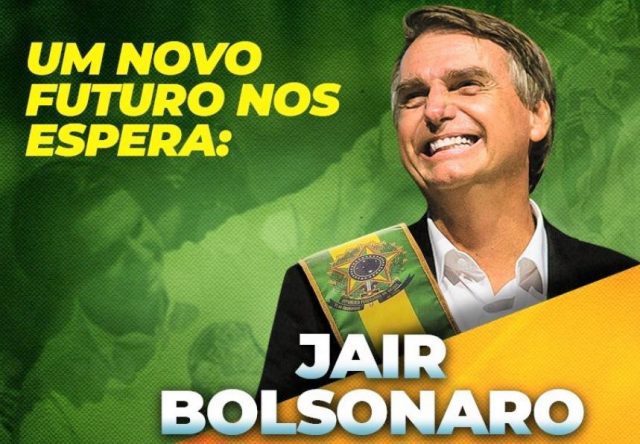 The last time we checked on Brazil, Jair M. Bolsonaro, the nation’s President-elect who is often referred to as the “Brazilian Trump,” announced plans to move the country’s embassy in Israel from Tel Aviv to Israel’s capital, Jerusalem.

Now, in the mode of the American President, Brazil is canceling its plans to host a UN climate change summit.

Brazil has withdrawn its offer to host a large UN conference on climate change next year, the foreign ministry said Wednesday, leading environmental groups to question the government’s commitment to reducing carbon emissions.

Brazil pulled its offer to host the 2019 climate change conference because of “the current fiscal and budget constraints, which are expected to remain in the near future,” the foreign ministry said in a statement sent to The Associated Press.

Environmental groups interpreted the decision as a nod to President-elect Jair Bolsonaro, who promised during his campaign to pull Brazil out of the Paris accord on climate change.

As an extra bonus, and in keeping with his vision for the new, prosperity-oriented direction for his nation, Bolsonaro chose a Trump-admiring diplomat who claims climate change is a plot by ‘cultural Marxists’ as his new foreign minister.

Bolsonaro’s pick of career diplomat Ernesto Araujo, 51, underscored Brazil’s sharp turn to the right and the reversal of nearly a decade and a half of diplomacy under leftist Workers Party governments that focused on alliances with South American allies and ideological partners – including Cuba.

…Araujo, a career diplomat, is currently head of the foreign ministry’s United States and Canada department.

In his blog, Metapolitia Brasil, Araujo claims his goal is to ‘help Brazil and the world liberate themselves from globalist ideology’.

In a post last month he writes: ‘This dogma has been used to justify increasing the regulatory power of states over the economy and the power of international institutions on the nation states and their populations, as well as to stifle economic growth in democratic capitalist countries and to promote the growth of China’.

Araujo isn’t the only appointment that has earned the ire of green justice activists.

His pick as agriculture minister is the head of the farming lobby, Tereza Cristina Dias, who conservationists have nicknamed the “Muse of Poison” due to her enthusiastic support for relaxing controls on agro-toxins.

She and her colleagues are said to be gutting the responsibilities of the environment ministry before its new head is appointed. The environment institution is likely to be so subservient that insiders joke there will soon be two agriculture ministries in Brazil.

I predict that Bolsonaro Derangement Syndrome should begin shortly.

BIG difference from 1992 and today,

The 1992 United Nations Conference on Environment and Development, also known as the Rio de Janeiro Earth Summit, produced Agenda 21 which is having its intended effects of hamstring development in the USA.

Agenda 21 has morphed into the 2015 “Transforming Our World: the 2030 Agenda for Sustainable Development.” Which is even more comprehensive. The world’s elite are bound and determined to bring us all under the UN heel.

We knew (or at least feared) that this was coming, but Friday saw the finalization of the new biofuels – specifically ethanol – blending requirements for 2019 and 2020. And true to the promises that President Trump made to Iowa politicians, we did not see any significant reductions in the Renewable Fuel Standard (RFS) mandates. In fact, they went up, much the same as under Obama’s EPA. (EPA website)

I’m trying to remind myself that the news hasn’t been entirely bad on the RFS front. Several of the smaller, older refineries that are unable to blend ethanol and were getting murdered on the Renewable Identification Number (RIN) market scheme have received waivers, allowing them to remain in business. But some of us had really been hoping that the second half of Trump’s first term might see these blending mandates rolled back a bit, if not eliminated entirely. Sadly, the will doesn’t exist in either the White House or the GOP-led Congress to anger King Corn and his subjects in Iowa.
–HotAir

I don’t think so

Everything in its own time