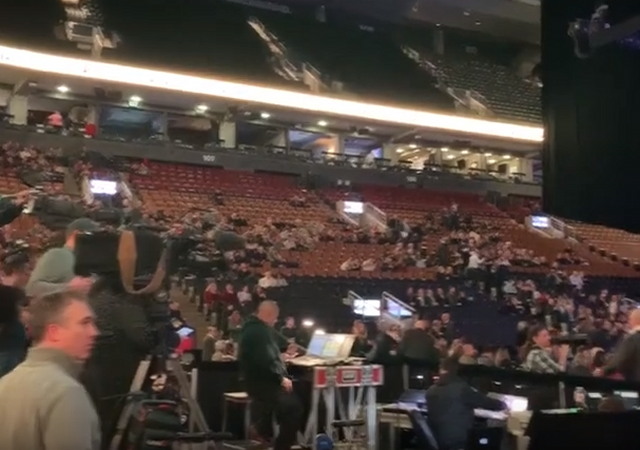 No one is exactly sure why the Clintons have decided to do a national tour. They’re not running for anything that anyone knows of, and they certainly don’t need the money. The optics aren’t great for them, either. They’re playing to lots of empty seats.

Even Maureen Dowd of the New York Times is writing about it:

Curtains for the Clintons

The snow is falling lightly.

My thoughts are racing darkly.

I’m feeling something foreign, something I’ve never felt before. It takes me a moment to identify it.

I’m feeling sorry for the Clintons.

In the 27 years I’ve covered Bill and Hillary, I’ve experienced a range of emotions. They’ve dazzled me and they’ve disgusted me.

But now they’re mystifying me.

I’m looking around Scotiabank Arena, the home of the Toronto Maple Leafs, and it’s a depressing sight. It’s two-for-the-price-of-one in half the arena. The hockey rink is half curtained off, but even with that, organizers are scrambling at the last minute to cordon off more sections behind thick black curtains, they say due to a lack of sales. I paid $177 weeks in advance. (I passed on the pricey meet-and-greet option.) On the day of the event, some unsold tickets are slashed to single digits.

I get reassigned to another section as the Clintons’ audience space shrinks. But even with all the herding, I’m still looking at large swaths of empty seats — and I cringe at the thought that the Clintons will look out and see that, too. It was only four years ago, after all, that Canadians were clamoring to buy tickets to see the woman who seemed headed for history.

Twitchy points to this tweet from Dowd which isn’t sitting well with folks on the left:

Live shot of “An Evening with the Clintons” pic.twitter.com/Bmyk9t4R5h

What is wrong with you?

This is literally all you have, isn’t it?

After scrolling quickly through the comments I've found only 2 that are complimentary to this article and neither has a profile pic & one has 14 followers, and the other has 4 followers. ????MD, you have a forum, why not use it to shine a light on something useful? Just a thought.

This video will give you an idea of what Dowd is talking about:

Bill and Hillary Clinton have taken their show on the road. Ticket sales for “An Evening with the Clintons” are not what they once might have been, according to all reports. With stops deliberately booked in what are assumed to be Clinton-friendly cities, the aging power couple seems to be having trouble filling seats…

The venue in Toronto only sold 3,300 tickets. Whole sections of the arena were empty. I checked the website for ticket prices and for the Houston stop, the cheap seats go for $15.00 and the most expensive ticket price I could find was $1146.00. That’s a real bargain, especially compared to the book tour events (it’s not just a book tour, they are events) scheduled for former First Lady Michelle Obama. The high-end prices for the Michelle tour go for $10,000. That is what I found and it’s not a stop in Houston but in Dallas at the American Airlines Center. The Clinton venue in Houston is smaller.

Contrast that with Michelle Obama, who just sold out a venue with almost 20,000 seats.

Gregg Re writes at FOX News:

Obama told the sold-out crowd that women can’t experience equality in both their professional and personal lives “at the same time,” calling the idea a “lie” and arguing that “marriage still ain’t equal, y’all.”…

Interest in the sold-out Barclays evening was so great that Obama is set to return there on Dec. 19 for a discussion moderated by actress Sarah Jessica Parker.

Love all the DOORS songs on Video of the Day. What a band!

Not if one is sufficiently delusional.

Those empty-seat photos are part of a vast right wing conspiracy. See how easy that is if your BAC is north of 0.20%?

She would take a knee, but probably couldn’t get back up without vomiting.

Hillary Clinton is running again, ostensibly for the office of President. She and Bill have already confirmed that placement in high public office in the United States, other than the Presidency, can be treated as a cash cow. Further, a candidate for the presidency is insulated from legal charges, if that candidate is a Democrat. Finally, she can continue to pursue “relevance,” which may benefit her daughter and her primary constituents, donors such as George Soros.

Why wouldn’t she be touring?

notamemberofanyorganizedpolicital | December 3, 2018 at 11:19 am

Not Buying the Lies about Michael’s book tour………

TheFineReport.com in reply to notamemberofanyorganizedpolicital. | December 4, 2018 at 3:15 am

Damn straight. During mooochelle’s ‘speech,’ skid row became empty wherever she spoke, and became mysteriously repopulated after each event.

How bought her b.s. book, but hacks chipping in to create the illusion she would write anything anyone would pay to read.

Off script, barack proves he is a dumbass. Off script, mooochelle proves she she’s is an potty-mouth dumbass.

Pack these two tumors up with the clintons.

notamemberofanyorganizedpolicital in reply to TheFineReport.com. | December 4, 2018 at 2:54 pm

Remember too, that in the book publishing industry, the book “sales” are counted as “sold” whenever the book comes off the assembly-line and is shipped out.

It is not when actual books are really sold to the end consumers that is counted towards the book sales.

So the NYT can have all sort of “hit” best sellers that actually are the bottom of the crop in sales when the returns to the publishers are subtracted out.

“Y’all”? Is this how people from the south side of Chicago speak?

As authentic as the rest of this fraud.

Same thing jump out at me. Come hear Michelle curse… how edgy. And the faux southern or is it urban dialect. So completely phony.

I wonder how the progressive feminists will rationalize their way around that bit of rank heresy.

She spoke to a packed crowd. But it was packed because she herself took up so many seats.

Was there any other reason to read this post?

Surely, someone on their planning team must have seen that tickets were not selling. They could have cancelled the tour or at least change the venues to Starbucks or other more suitable places. But playing to such small audiences in such huge venues is embarrassingly stupid. Maybe Hillary going through the motions of running for office provides some legal protection against prosecution?

Used to be, that being as popular as the NFL was quite the compliment…

These “seas of empty seats” are funded in part by the New Democratic Party, soon to be known as SPUSA (Socialist Party USA), Alexandria Ocasio-Cortez, Agitator-In-Chief.

Self-reverence and vanity are the defining traits of contemporary Leftists/Dumb-o-crats.

The Clintons are incapable of enjoying their ill-gotten lucre in privacy; they must be at the forefront of the public consciousness. The similarly narcissistic Obamas are the same.

Yup. Self delusion is a wonderful thing sometimes.

It’s almost like people stop trying to bribe you when you stop having influence to sell.

Dowd and the other leftoid slugs still don’t understand the Clinton phenomenon. All of it has been directed, right from the beginning, to enable Hillary to Make History by becoming the first woman POTUS. Everything so far—including the last time she was in the White House—has been preparation for that.

Billy Jeff wasn’t all that interested in the Presidency. He had no great plan, no wish list of things he could accomplish either for the country or for himself once he was in the office. His ambition was to be JFK . . . especially the sex-with-movie-stars stuff.

As for the office itself, Billy Jeff spent a lot of time obsessing over how great a President he’d be, and then when it became clear that he wouldn’t go down in history as anything much, he obsessed over just how great he would look, if he couldn’t end up looking great. He never actually got around to trying to do anything worthwhile; he was really just along for the ride. He tried to fob the actual job off on the wife, the one who really wanted to be in charge. Recall that rubbish right after the inauguration, about how we’d have “co-Presidents” and how we’d gotten “two for the price of one.” Nobody was terribly impressed. So he put her in charge of his only ambitious project, “Hillarycare” . . . and we know how that turned out. After that, his terms were swallowed up by crises precipitated by his own bull-in-the-china-shop antics. So much for a place in history.

But to Hillary, it was all just a launch pad for her own Presidency. She needed something big the first time ’round; being the wife of even a lackluster POTUS was all that elevated her from just another sleazy lawyer from a hick state into something which might possibly be Presidential material. The graft and corruption along the way were all well and fine, but they were never the goal; money—lots of it—is a tool to get her into the Oval Office.

The Presidency is her life’s object, her raison d’être; she has nothing else.

She will definitely try to run again. The D’rats won’t be wild about being suckered again, but she’ll try if she’s not dead or in jail.

Dowd is a jerk. She’s a one trick pony.

When she loses the Dem primary, will she launch a 3rd party bid?

All I can add to Tom’s comment is “Yep.”

It would almost be fun to snap up some of those $15 tickets and put “lock her up” placards in the seats…..

Or better yet….. Trump cutouts!

It’s probably going to turn out that they’re paying people 15 bucks – and all they can eat – to show up.

Rumor is buses are mysteriously showing up at skid rows across the country.

THIS IS DISCRIMINATORY to an ex-President and a should-be President.
Early in January, the Democratic House should pass a bill — effective immediately — to buy excess tickets at face value and distribute them to welfare recipients. This would be a win-win for everyone.

Like an over the hill band no one wants to hear anymore.

When your book sales fall through the basement that alone should have been a clue to not do a speaking tour.