This is a big deal. Imminent, intrusive discovery into Trump’s finances will be stalled for months, and perhaps never allowed to proceed. 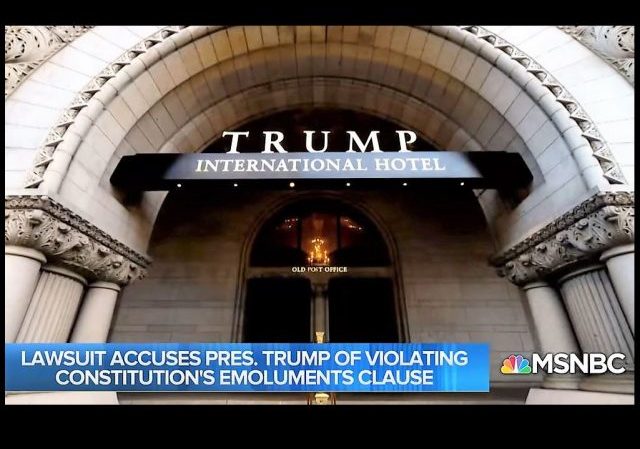 Last night, the Fourth Circuit stayed Maryland and Washington, D.C.’s Emoluments Clause lawsuit against President Trump in its entirety, while scheduling oral argument in the case to begin on March 19, 2019.

This means that the litigation will be completely paused until the court reaches a decision on the President’s petition, which won’t be for at least three months.

Upon consideration of submissions relative to petitioner’s motion for stay, the court grants the motion and stays the district court proceedings pending proceedings before this court. This case is scheduled for oral argument during the March 2019 term, March 19-21, 2019.

The parties should be prepared to argue not only the procedural issues regarding the mandamus petition but also the underlying issues of (1) whether the two Emoluments Clauses provide plaintiffs with a cause of action to seek injunctive relief and (2) whether the plaintiffs have alleged legally cognizable injuries sufficient to support standing to obtain relief against the President. 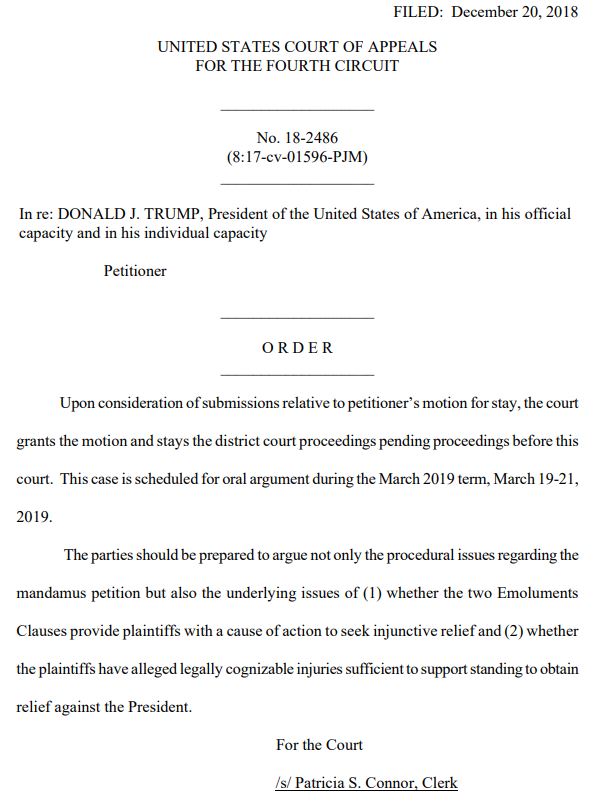 The delay is actually a big deal. It means that imminent, intrusive discovery into the President’s finances will be stalled for months, and perhaps never allowed to proceed.

Dozens of outstanding subpoenas authorized by the trial judge—several of which were served on the Trump International Hotel and Trump Organization just two weeks ago—are now frozen. Importantly, the stay has also spared the Solicitor General from having to spend his precious (and perhaps diminishing) capital seeking yet another emergency intervention from the Supreme Court.

Yet aside from its political implications, the case presents novel questions about areas of the Constitution the Supreme Court has never really had a reason to explore.

It all started in June 2017 when the attorneys general of Maryland and D.C. sued Trump, alleging that, through his businesses, he is violating two obscure provisions of the Constitution: The Foreign and Domestic Emoluments Clauses. The Foreign Emoluments Clause forbids federal officials from accepting, without the consent of Congress, any “present, Emolument, Office, or Title, of any kind whatever, from any King, Prince, or foreign State.” Its domestic counterpart forbids the president specifically from receiving any emolument, other than his official salary, from the federal government or any of the states. (Notably, the Domestic Emoluments Clause does not allow for a Congressional waiver.) Maryland and D.C. aver four distinct types of harm.

Judge Peter J. Messite, an appointee of President Bill Clinton on the Federal District Court in Greenbelt, MD, dismissed (1), but allowed (2), (3) and (4) to proceed. On December 3, Judge Messitte issued a scheduling order requiring that some preliminary discovery be completed by December 31.

The DOJ, which is representing Trump since he is sued in his official capacity, sought mandamus relief and a stay in the Fourth Circuit. And somehow, despite the prognostications of Laurence Tribe and Norm Eisen, the DOJ got the stay.

BREAKING: discovery is rolling in the #emoluments case—so of course Trump is trying a Hail Mary to stall. Here’s our brief saying “Hell no!” Great work by @deepakguptalaw @BrianFrosh @AGKarlRacine @CREWcrew @CohenMilstein & proud to have my name on here https://t.co/xdKt2InWdg

These crooks — which is what the Trumpelstiltskins are — fear the truth more than they fear filing legally irresponsible motions like this anti-discovery demand and the mandamus petition to halt the Emoluments Clause trial.https://t.co/xgpO5GkKPN

A brief parting thought: There is another Emoluments Clause case, filed by Democratic members of Congress, pending in Washington, D.C. The Democrats will take over the House in two weeks. I wonder if they could explicitly vote to deny Trump their consent to accept any foreign emoluments, and if they did, whether that would affect their lawsuit.

The states and DC are making up some pretty weak arguments as to why they have standing to even bring the suits.

“Because orange man bad!” doesn’t seem to have much of an effect any more.

notamemberofanyorganizedpolicital in reply to Voice_of_Reason. | December 21, 2018 at 3:50 pm

Don’t these lawsuits give Trumps lawyers free reign for in-depth Discovery into the complainants?

The Foreign Emoluments Clause forbids the president from accepting, without the consent of Congress, any “present, Emolument, Office, or Title, of any kind whatever, from any King, Prince, or foreign State.”

No, it doesn’t. It forbids officers of the United States from doing so, but that term does not include the president or vice president, and probably doesn’t include any elected official. This is one of Trump’s major arguments that led to this interlocutary appeal. He argues (correctly, it seems to me) that the whole basis of the suit doesn’t exist.

My issue is that selling a product at fair market price should not be viewed as a gift, but allow me to make this point. The Constitution has been in written form, published and available to all, for over two centuries. Why can’t people be bothered to quote it correctly? It makes a mockery of all the sacrifices that were made for a free press, back to the time of the Gutenberg Bible.

Specifically, the relevant passage in the U.S. Constitution reads (emphasis mine):

No Title of Nobility shall be granted by the United States: And no Person holding any Office of Profit or Trust under them, shall, without the Consent of Congress, accept of any present, Emolument, Office, or Title, of any kind whatever, from any King, Prince, or foreign State.

By the plain reading, this could be read to apply to the President (“holding any Office of Profit or Trust under them”).

HOWEVER, “any Office” means it would ALSO apply to Representatives and Senators (and in fact, this passage is in Article I, which lays out the powers and limits of the Legislative Branch). The Democrats are playing a dangerous game if they think they can’t be impeached over their private business transactions the way they’re trying to go after Trump.

On top of that, normal business transactions aren’t really presents, gifts, or titles of nobility, are they? Even if they come from foreign nationals.

The charges under the Emoluments Clause are baseless. The point isn’t to defeat Trump; it’s to make Trump (and his businesses) fight an expensive battle against the limitless legal resources of the State. The Process IS the Punishment.

Hypothetical: If a Democrat member of Congress owned a law firm before being elected, and retains ownership or controlling interest while in office, are they guilty of treason if a young lawyer in their firm helps an illegal immigrant with a DUI charge? How about if they help a “refugee” gain asylum, and that person goes on to commit a terrorist act? Didn’t they just “adher[e] to their Enemies, giving them Aid and Comfort”?

No, (1) the immigrant or refugee is not an enemy of the United States, and (2) the lawyer would not have adhered to him. The courts have been clear that adherence means support for the enemy’s cause, and that the acts giving aid and comfort must be motivated by that adherence.

The Democrats will take over the House in two weeks. I wonder if they could explicitly vote to deny Trump their consent to accept any foreign emoluments, and if they did, whether that would affect their lawsuit.

I don’t see how that would change anything. He has no consent now. His case is a) he isn’t receiving any emoluments; and b) if he were he wouldn’t need consent.

If the Democrats expansive view of the emoluments Clause were to prevail then consistency would dictate that each Congressman who indirectly profited from legislation; also violated the Clause.

Um, no, it wouldn’t. Even if they were officers of the United States (which nobody suggests), and even if their interpretation of “emolument” were correct, they would only be forbidden to get income from foreign governments.

This is pure open Lawfare. Such a lawsuit against Obama would have been dismissed without delay. It is shameful that State Attorneys General are involved in this politicized muck

So let us go back and explore the financial dealings of LBJ or more recently the Clintons. How many foriegn dealings with other nations were white washed under these Democratic Presidents. We know of Uranium One.

Could it be any more clear that this Administration is being obstructed by the Media, the Swamp, Demoncrats, Republicans and the courts!

In my view this is treason…

In the constitution’s view it isn’t.

At the same time, he is dealing with 17 legal actions against him and his family, not all of which are from the special counselor.

And some people believe that he’s not a capable man.

The domestic emoluments clause at least does cover the president, in fact he is the only person it covers. So if their interpretation of “emolument” were correct, that would be a better case.

“(Notably, the Domestic Emoluments Clause does not allow for a Congressional waiver.)”

I wonder how our Congressmen feel about this. Do they really think their overt corruption will be immune from this genie if the AGs release it from the bottle? Plagues don’t discriminate. Choose your weapons wisely.

The domestic emoluments clause applies only to the president and nobody else. So they have nothing to fear unless they become president.

I wish some enterprising soul would total up the costs of lawfare that attempts to undermine this Presidency. It could maybe have a graph by time, including costs of the Mueller bs and other lawsuits. Bonus points if it identifies any private sources of funds.

I would rather see the GOP engage in the same sort of warfare against the Left.

Before all this happened, I always thought an emolument was something like Noxzema.

There needs to be some sort of cost for these frivolous lawsuits. What costs can we impose upon the lawfarers for this sort of BS?

Given that this may be individual States interfering with the country as a whole could it be possible for other state attorneys to bring suit against them in turn?

Stephanie Clifford (aka Stormy Daniels) has been on the losing end of the imposition of costs recently.

There are ways of pleading for the reimbursement of Attorney’s Fees and Costs. You just have to have a Judge that’s willing to stick it to the lawfare types.

Not in most suits. The Daniels case was different, because it was a SLAPP suit, litigated under Texas’s SLAPP law (there is no federal one). The whole point of SLAPP laws is to make an exception to the usual rule that you can’t recover costs. There are other exceptions, but it remains the usual rule.