“danger in legitimizing [Spicer’s] voice in an academic setting” 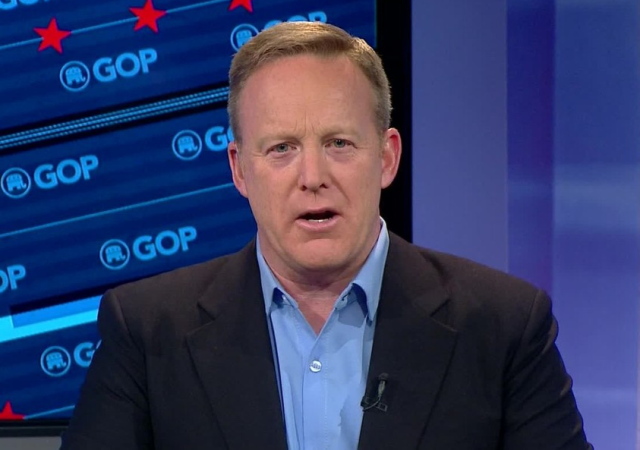 The College Republicans invited Spicer, but they naturally can’t be allowed to enjoy the visit.

The University of Massachusetts Graduate Employee Organization protested former White House Press Secretary Sean Spicer ahead of his appearance at the Amherst campus on Tuesday night.

The UMass Amherst College Republicans announced Spicer as its Fall 2018 guest speaker in a Facebook post on Nov. 1. Spicer will discuss his time as President Donald Trump’s top spokesman, as well as his new book, according to the post.

On Monday, just hours before Spicer’s talk, the UMass Graduate Employee Organization, a labor union, invited its supporters to meet outside the building where Spicer will speak in order to “create a space that embraces the voices that the Sean Spicer’s [sic] want to erase.”

“We aim to create a platform for the voices that have been silenced on our campus, not the voices of white supremacy, which always have the mic,” the GEO’s Facebook post states.

“Sean Spicer’s support for the travel ban, as well as his comments downplaying the severity of the Holocaust, and his role in espousing alternative facts for the Trump administration, are all reasons why the UMass Amherst administration should think more critically when presented with the decision of giving him a platform,” the post adds.

The group goes on to state the “danger in legitimizing [Spicer’s] voice in an academic setting is real and demonstrably counter to both the safety of the people who work and study at UMass and their sense of belonging to an institution which would purport to protect them.”

How has Sean Spicer sought to silence the voices of minorities and “progressives”? No one ever challenges these absurd claims by the left.

The left always projects but wow, this is pure projection from beginning to end, accusing conservatives of silencing opponents (from the “no-platform” movement that, since it can’t win an argument, aims to systematically obstruct as much conservative speech as possible). Then the Jew haters accuse a spokesman for the most pro-Jewish presidency ever of anti-Semitism.

They really must hate themselves because it is themselves who they are condemning. Except I don’t think they actually have any genuine feelings about anything at all. They simply pantomime whatever sense of grievance they find serviceable at the moment in their quest for power.