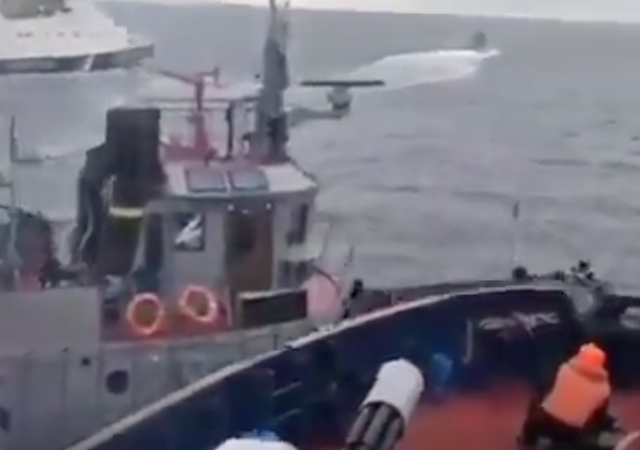 The undeclared war between Ukraine and Russia took a horrific turn on Sunday after Ukraine claimed that Russia opened fire on its navy in the Kerch Strait, which separates the Black and Azoz Seas.

Ukraine‘s “Military Cabinet passed a resolution to impose a martial law.” President Petro Poroshenko plans to “appeal to the Ukrainian parliament to approve his declaration of martial law.”

Russia’s coast guard claimed that three Ukrainian vessels “trespassed its territorial waters” and opened fire. Military vessels do not have permission to enter the Kerch Strait. From The Kyiv Post:

In a shootout, Ukraine’s small armored artillery boats Berdyansk and Nikopol sustained damages and were immobilized. Ukrainian tugboat Yani Kapu had been rammed by a Russian coast guard ship Don earlier in the morning.

All three vessels have been seized by a Russian special operations unit, the Ukrainian Navy press service reported.

Reportedly, at least six Ukrainian naval officers have been wounded.

However, Ukraine’s Chief of the General Staff Viktor Muzhenko said that there were 23 naval officers on three military boats that were arrested by Russians. Ukrainian officials have no contact with the rest of the personnel of the detained vessels.

The Ukrainian Navy’s website http://navy.mil.gov.ua/ has been down due to DDos attack.

#BREAKING: #Russia has opened fire on one of the Ukrainian vessels, reports of at least one sailor injured pic.twitter.com/67gEBQVjzV

Russia stole the Crimean peninsula away from Ukraine in 2014. The Kremlin “claimed territorial waters off the peninsula’s coast that Ukraine does not recognize.” However, the two countries signed a treaty years ago before annexation “designating the sea as shared territorial water.”

Ukraine stated that Russia violated that treaty and the United Nations Law of the Sea.

Martial law is serious. If imposed, it “could lead to widespread compulsory military service, restrictions on media and public demonstrations and suspension of elections, among other measures.”

Poroshenko told officials: “We have irrefutable evidence that today’s aggression against Ukrainian Navy boats was not an error or coincidence. It was an aimed action, including opening fire on Ukrainian naval personnel.”

Mustafa Nayyem, a member of parliament, said this situation “grows more complicated by the fact that during martial law, it is forbidden to hold presidential, parliamentary or local elections, as well as strikes, protests, rallies and mass actions.”

Russia and Ukraine have been involved in this undeclared war since the spring of 2014. Poroshenko has not called for martial law even as east Ukraine remains a war zone between Ukrainians and pro-Russia separatists supported by Russia.

Ukraine’s parliament passed the bill “On the Legal Regime of Martial Law.”

The Kyiv Post offered more details on what martial law will do to society:

People like me have been screaming for NATO and the EU to accept Ukraine as a member. Until then, there’s only so much the West can do except “closely monitoring” the situation and sending Russia strongly worded letters.

Years ago when pro-Russia separatists shot down a commercial airplane and killed almost 300 people, the West didn’t lift a finger…even though their citizens perished in the attack.

Anyway, NATO and the EU supplied their usual statements:

NATO spokesperson Oana Lungescu released a statement saying that NATO is closely monitoring developments in the Azov Sea and Kerch Strait and is in contact with the Ukrainian authorities.

“We call for restraint and de-escalation,” Langescu’s statement read on behalf of NATO. “NATO fully supports Ukraine’s sovereignty and its territorial integrity, including its navigational rights in its territorial waters. We call on Russia to ensure unhindered access to Ukrainian ports in the Azov Sea, in accordance with international law.”

Maja Kocijančič, the spokesperson for Federica Mogherini, the High Representative of the European Union Foreign Affairs & Security Policy, also urged Russia to restore freedom of passage through the Kerch Strait and de-escalate immediately.

“The events in the Sea of Azov are a demonstration of how instability and tensions are bound to rise when the basic rules of international cooperation are disregarded,” Kocijančič’s statement read.

Nikki Haley announced on Twitter that the UN Security Council will convene for an emergency meeting on Monday.

An emergency Security Council meeting has been called for tomorrow at 11:00am https://t.co/FpCAD2rGPn

Vlad must think he’s been ignored and out of the news far too long, what with elections and caravans, French fuel tax hikes, etc.

I think it’s more like Putin knows that the Dems will oppose most any decision Trump makes to get involved or not get involved. So the secondary benefit for them is increased political chaos in the U.S. especially now that we are barely a month away from Dems in the house being more active in impeding his every move.

Dems are either unwitting or willing dupes for what Putin will do over the next year or so. Whichever it is doesn’t really matter.

Dems are willing dupes for what Putin will do.

why should USA get militarily involved ?

This is NOT our war. Let the French fight it. Ha.

This is more than likely an action designed to allow Russia to step up its acquisition of the Ukraine, which it has been actively attempting for the last decade.

The only real opposition to Russian actions, is the US. Most of Europe is entering what is predicted to be a record cold winter and it buys most of its natural gas, used for heating, from Russia. So, it is unlikely that any EU nation is going to actively oppose Russia in this. The US is tied up with NK, China, The Southern Border invasion, the Khashoggi fallout and the impending Congressional power swap. This lessens the likelihood that the US will become directly involved. And, the Russians did something similar after the 2008 elections with Georgia.

On the other hand, this incident is also equally likely to have been orchestrated, or at least taken advantage of, by the government of the Ukraine. With all of the aforementioned areas of concern, which the US is dealing with, as well the loss of support due to the loss of the US House of Representatives to the Democrats, The Ukrainian government may see this a its last opportunity to gain US military support for its struggle with Russia, as well as an excuse to crackdown on internal dissidence.

Direct military action against Russia, by the US, would probably not be advantageous to the US, at this time.

Since the overthrow of the democratically elected Ukranian government, albeit with a bias that favored Russia over Western Europe, and forcing a refugee crisis cut short through Russian aid. That said, Western Europe now has a reliable petroleum reserve in Libya after that elective regime change.

The overthrow was “enhanced” by US assistance (under Obama)… which was a direct violation of the arms agreement signed by US with Ukraine and Russia. That and Libya have HRC and BHO fingerprints all over them.

Just and FYI… it’s Ukraine, without the article. Referring to the country as “the” Ukraine harks back to the USSR. Thanks

Ukraine means “the borderland” and that is what it has been called since about the 12th Century AD, when it was part of the Russian confederation later called Kievan RUS. The English translation has always been THE Ukraine. So, the name long predates the Soviet Union. Now, Ukrainians can call it whatever they choose. But, calling the area The Ukraine is more accurate and every bit as acceptable as calling it simply Ukraine.

You didn’t tell me anything I didn’t already know seeing as how I am of Ukrainian heritage, and I repeat Ukrainians loathe the country being referred to as THE Ukraine. Just saying.

War is not possible in Europe.

With the existence of nukes, and “advanced” ground troops and equipment, a “war” won’t work.

Neither side will go nuclear, thus it will just be a massive bombardment campaign with whom ever knocks out the other’s radar…wins.

Wars in the Middle East and Africa and Asia can last for YEARS since one side is primitive and the other is afraid of being called “racist” if they bomb the hell out of the others. You can bomb any European city and nobody will say a word (Dresden). This is why wars outside of Europe are such a great business model and profit center.

“WE” were not allowed to fire bomb North Korea, North Vietnam nor Iraq. If we had, all of those “wars” would have been over in 24 hours. We only defeated Germany and Japan when we killed their women and children.

The Ukraine? War over by the 6 o’clock news hour.

It may be “predicted” that Europe is due for a very cold winter, but so far NADA! Usually we have had a week of sub 32F weather by now….not happened yet…..2 nights that got down to 32F but that’s it the days have been in the low to mid 40F….We are having our third day of snow and nothing is sticking to the ground. Looking at the forecast, I see a couple of cold days and night but mostly low to mid 40Fs here in Bratislava through mid December. We usually (last 4 years) have 2 weeks of cold and snow the last week of January and first week of Feb where the lake in our village freezes over and the kids can play ice hockey….will probably be the same this year…..

I’m sure that the two greatest Secretaries of State — Kerry and HRC — know just the right solution for all parties. Just think if either were the POTUS, the world would have no worries. Right?

This situation could be worse.

Ukraine taking on the Soviets? Really?

The Ukraine should actually join with Russia, along with Hungary, Romania, etc. and form a better Union to STOP the mass invasion of Europe, and to oppose the racial suicide being promoted by the un-elected rulers of the EU.

If not, Budapest will end up like the open sewer that is Paris today.

It’s easy to tell others what to do. I think those who have managed to regain their independence would have something to say about your recommendation that they join Russia.