Trump to Acosta: ‘You are a Rude, Terrible Person, You Shouldn’t be Working for CNN’

Trump to Acosta: ‘You are a Rude, Terrible Person, You Shouldn’t be Working for CNN’

“Honestly, I think you should let me run the country, you run CNN and if you did it well, your ratings would be much better.” 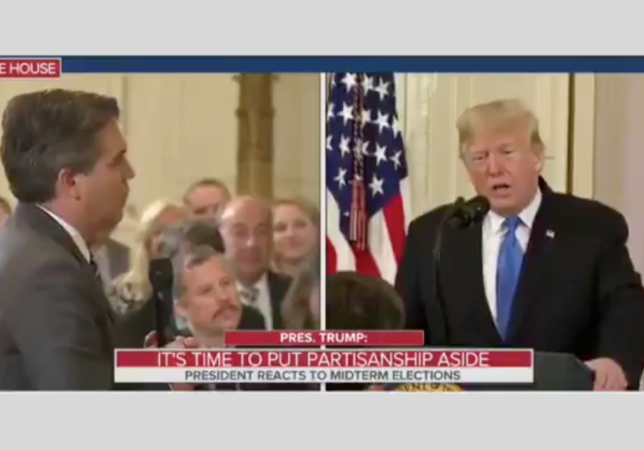 President Donald Trump locked horns with CNN’s Jim Acosta. As usual, Acosta used the press conference to create a spectacle, refusing to cede his turn to the next reporter when Trump had moved on and hanging on to the mic when a staffer tried to take it to pass to the next reporter. When Acosta kept on, Trump told him to stop.

“That’s enough. Put down the mic,” he ordered Acosta, as a White House aide tried to take the microphone from him, only for Acosta to initially refuse to turn it over and push her arm down. “I tell you what, CNN should be ashamed of itself having you working for them. You are a rude, terrible person, you shouldn’t be working for CNN.”

It was one of several testy exchanges during the nearly 90-minute press conference. The dispute began when Acosta first asked Trump about the migrant caravan approaching the U.S. southern border. After challenging Trump whether the caravan really was an “invasion,” as Trump had previously stated, Acosta proceeded to “caravan-splain” to Trump.

“The caravan was not an invasion, it is a group of migrants moving up the border from Central America towards the border with the U.S.,” the reporter scolded Trump.

“Thank you for telling me that, I appreciate it,” Trump said, before saying he had not “demonized” immigrants as Acosta claimed.

But as Trump answered, Acosta repeatedly interjected and went back and forth with Trump over how the White House had characterized the caravan.

“They’re hundreds of miles away, that’s not an invasion,” Acosta said.

“Honestly, I think you should let me run the country, you run CNN and if you did it well, your ratings would be much better,” Trump said.

OMG! I love this president. What a fighter.

I really wish they would kick him out – remove his credentials !
He really is an embarrassment for the nation, for him to be so totally uncivil, rude and obnoxious !

Now we have more evidence of Jim Acosta assaulting a woman than Brett Kavanaugh!

Nah. Kick him out and he becomes a martyr. Let him in and he makes CNN look ridiculous.

This is a game. CNN would die without its daily dose of Trump.

He should order the people with mikes to never hand them over, just hold them like on Donahue or Oprah tel.

CNN and Acosta play right into Trump’s hands. Honestly. He plays them like a fiddle. If Acosta was polite and respectful to his fellow journalists’ time, I think Trump would not have so much to rail him on.

Acosta is such a tool.

Tools can be useful.

I have found that Trump is invariably polite and well-spoken to people who are polite to him. The press has found that they can intimidate Republicans by being rude and loudmouthed. Using that tried and true technique on Trump… doesn’t work.

I’m really surprised that the press conferences don’t have multiple mikes and the ability to selectively mute. That way when Acosta clings to his microphone, it can be chopped off totally, leaving the useless reporter holding a useless stick while the next reporter gets handed a fresh mike.

I’ve never heard of a PA system which didn’t have that capability. Which implies that if the White House didn’t cut Acosta off, it’s because somebody wanted him to let him make a public ass of himself.

True. When your enemy has dug himself into a hole, keep giving him shovels. However, you have to like the image of Acosta screaming incoherently into a microphone that just keeps getting softer, and softer, and softer…

With a laughing sound technician in the back of the room.

Reminds of Sam Donaldson. I wonder if the other reports approve of Acosta hogging the microphone at their expense?

Believe all women, especially when they tell you that your turn is over.

There are reasonable distinctions to be drawn between the caravan and an invasion, but I don’t understand why Dems think distance is one of them. If an invasion force can’t be called that when it’s 1000 miles from its destination, when can it be called one? When it’s ten miles out? One mile? Or does one have to wait until they’ve crossed the border?

Obviously it’s not until they’ve crossed the border, but why should that self-serving distinction bother either of us?

That exchange was epic

This was long overdue and I’m happy the President went part of the way to putting Acosta in his place. The next time Acosta is rude (today or tomorrow), he should be kicked out of the White House for a month. Happens again after that, make it permanent. CNN can put another person in the White House Pool, it isn’t like Acosta is the only employee at CNN.

I wish Trump would just step around the podium and beat his punk ass. I’m sick of hearing his whiny, mealy-mouthed bullshit.

As Londo Mollari put it, “Ah, arrogance and stupidity all in the same package, how efficient of you.”

Acosta such a perfect blend of arrogance and stupidity that he makes Trump look like the adult in the room.

It’s why Trump will NEVER revoke Acosta’s credentials. If he got rid of Acosta, CNN MIGHT replace him with somebody actually articulate and smart enough to actually trip up Trump.

Agree. Acosta goes back to CNN and they all pat him on the back – man, you were great!

Meanwhile, normal America laughs at him for being the biggest D-bag in the country.

acosta is simply building his resume for when he leaves cnn. He is an asshole but then so are most of the other reporters on TV and acosta wants his name to be a household word. I think the only house where his name is well known is the outhouse!

Its all about Dim Acosta all the time. What a doofus.

Acosta was set up the moment Trump called on him. He’s just too stupid to realize it.

I think White House security should have a very intense talk with Acosta about what will happen to him if he ever touches a White House aide in that fashion.

“KROFT: You definitely have some impressive accomplishments.

KROFT: No, you do. And more than a lot of presidents who manage to get reelected. My question is, is it enough? Why do you think you deserve to be reelected?” – From a 2011 ’60 Minutes’ interview between Steve Kroft and B.H. Obama.

“What has enchanted you the most from serving in this office?” That was a love letter from New York Times reporter Jeff Zeleny during a press conference after B.H. Obama’s first one hundred days in office. Zeleny is now CNN’s senior White House correspondent.

I have no sympathy for any of these MSM propagandists or their victorian vapors over a brash ruffian like Trump who spits in their face and calls out their lies. They deserve every slap Trump delivers across their ugly mugs, and I’ll cheer every time I reach for more popcorn. Choke on it, Leftists.

“‘You are a Rude, Terrible Person, You Shouldn’t be Working for CNN.'” But he is.

The important thing to keep in mind here is that the people behind this are Jeff Zucker and his superiors. If he or they wanted it stopped, it would stop…instantly. Acosta is a dupe, a useful idiot. (Remember, a year ago he was appearing at pressers dressed in a snap brim hat and rumpled suit like an extra from a Spencer Tracy newsroom movie.) The day Trump calls out Zucker for this kind of behavior is the day it will stop. President Trump knows this, but is probably having too much for now beating up on the children. When he’s had enough, he’ll call out the Jeff Zuckers of the world. In the mean time, Zucker’s name should be attached to this sort of thing on blogs everywhere, in places like LI. He should be made to own it.