“That turkey is so lucky. I’ve never seen such a beautiful turkey.” — Trump 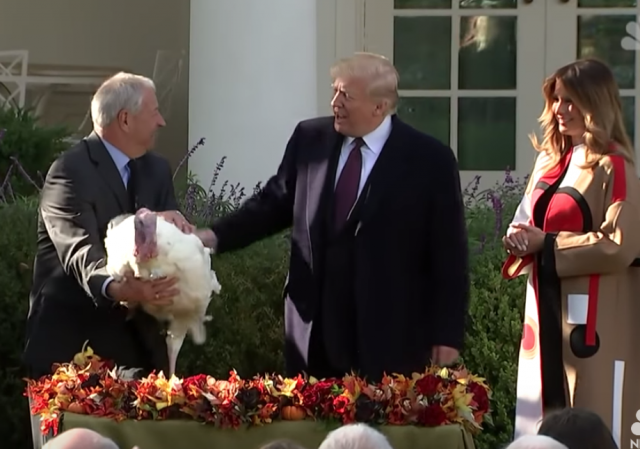 This year, voters selected the turkey to be pardoned via a poll on the White House’s official website.

Two birds, specifically: Peas and Carrots, who received a kind of “presidential pardon” from President Donald Trump on Tuesday in the Rose Garden.

“That turkey is so lucky. I’ve never seen such a beautiful turkey,” Trump said.

Joined by first lady Melania, Trump said although both turkeys were being pardoned, Peas was declared the winner of a White House poll that asked Americans to pick which turkey should be pardoned. Trump deemed the contest a “fair and open election.”

“Unfortunately, Carrots refused to concede and demanded a recount, and we’re still fighting with Carrots,” he said. “I will tell you we’ve come to a conclusion. Carrots, I’m sorry to tell you the result did not change.”

Peas and Carrots are the first presidential turkeys to come from South Dakota. Before their big day at the White House, the birds enjoyed special accommodations, including a stay at the Willard Intercontinental Hotel and a “spa day.” One of the birds also made an appearance in the press briefing room before his pardon, where he took a turn at the podium.

Whichever turkey it was did not answer when asked by one reporter if the bird had “promised anything in exchange for your pardon.”

After their time in the spotlight, the president said Peas and Carrots will live out their days at the nearby Virginia Tech’s “Gobbler’s Rest.” They join last year’s birds, Drumstick and Wishbone, who both received a pardon.

However, Trump said the turkeys’ retirement “won’t be entirely a rest.”

“Even though Peas and Carrots have received a presidential pardon, I have warned them that House Democrats are likely to issue them both subpoenas,” he said.

He added that he couldn’t promise the turkeys their pardons “won’t be enjoined by the Ninth Circuit (Court of Appeals).”

Just waiting on his Hawaiian Black Robeness to get involved and condemn the turkey to death again:)

I love that Trump can joke about the crazy Dem shenanigans

How many left wing kooks have claimed Trump is a racist because he pardoned white turkeys rather than black ones?

Yep… he showed favoritism to a “white” turkey.

Peas and carrots have a low demand. Pardon my stuffing… and gravy, too.

I always get a chuckle out of the Sarah Palin turkey-pardoning interview where a guy was slaughtering a turkey in the background.

Pelosi to bring 3 counts to impeach!

Alarming evidence has come to light indicating that America’s pardoned Turkeys don’t live out their days on a luxurious farmland paradise as promised.

An anonymous source (rhymes with Acosta) has discovered disturbing security tapes revealing the cold reality of Turkey Haven – cramped cages, filthy living conditions, with some victims even smuggled out to be sold on the black market.

The horrific videos were recovered from an unpaid storage unit in 2014.. Uhm.. Ignore that. Orange Man bad. ORANGE MAN BAD!

Now THAT would be funny.

Were I in his position, I would demonstrate the process for processing a turkey, from start to the table. Instead, we had tuna noodle casserole for lunch with some Stove Top thrown in, for good measure!

Ask and ye shall receive.