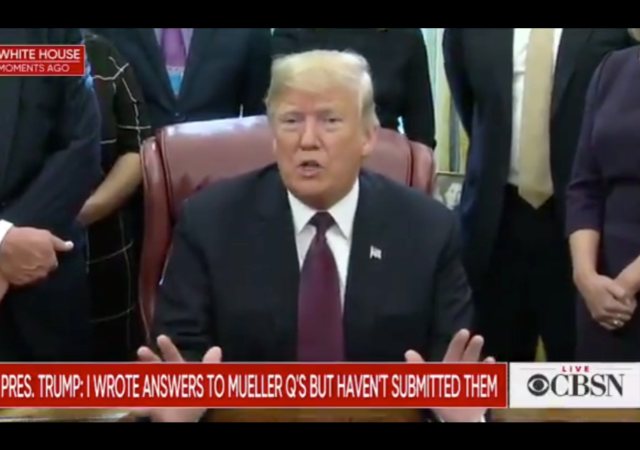 President Donald Trump told the media in the Oval Office that he answered all the questions from Special Counsel Robert Mueller.

He has not submitted the answers, but he wrote them out personally.

*This is a breaking story…updates will come when available…

Trump told reporters in the Oval Office that he hasn’t submitted the answers yet, but that he wrote them personally.

“I’ve answered them very easily. I’m working on them,” he said, later adding that he “just finished them.”

He denied that a string of fiery tweets accusing Mueller’s team, without evidence, of “screaming and shouting” at witnesses and “horribly threatening” them during testimony, was based on his fear of what the special counsel might find.

“I’m not agitated. It’s a hoax,” Trump said, adding that he is “very happy” because of the strong economy and other White House accomplishments.

Back in April, The New York Times published the list of questions Mueller wanted to ask Trump. The list included questions about former National Security Advisor Michael Flynn, firing of James Comey, Jeff Sessions, and of course any campaign coordination with Russia.

A person close to the situation told The Wall Street Journal that Trump’s “legal team for weeks has been working with Mr. Trump to develop responses to written questions provided by Mr. Mueller’s investigators on the subject of collusion.”

Trump’s lawyer Rudy Giuliani said earlier on Friday that no one has submitted the answers and did not provide a timetable over when it will happen. Giuliani described some questions as “unnecessary” and “possible traps.”

Trump criticized the Mueller investigation on Twitter on Wednesday:

The inner workings of the Mueller investigation are a total mess. They have found no collusion and have gone absolutely nuts. They are screaming and shouting at people, horribly threatening them to come up with the answers they want. They are a disgrace to our Nation and don’t…

….care how many lives the ruin. These are Angry People, including the highly conflicted Bob Mueller, who worked for Obama for 8 years. They won’t even look at all of the bad acts and crimes on the other side. A TOTAL WITCH HUNT LIKE NO OTHER IN AMERICAN HISTORY!

Universities will someday study what highly conflicted (and NOT Senate approved) Bob Mueller and his gang of Democrat thugs have done to destroy people. Why is he protecting Crooked Hillary, Comey, McCabe, Lisa Page & her lover, Peter S, and all of his friends on the other side?

The only “Collusion” is that of the Democrats with Russia and many others. Why didn’t the FBI take the Server from the DNC? They still don’t have it. Check out how biased Facebook, Google and Twitter are in favor of the Democrats. That’s the real Collusion!

I give the questions and answers about 30 seconds after being submitted to Mueller and his happy crew before they are leaked to every media outlet on the planet, and promptly edited for ‘content.’

Expect a number of answers ‘condensed’ like this: “There…interference in the election…Russian agents…on my payroll.” With each … being a few lines of context being snipped to make the words seem evil and nefarious.

it doesn’t take long to type out “FYNQ”, over and over, which is what i hope they did…

either literally or in legalese, although the first option would be epic.

BTW: is is just me, or did someone decide to re-org the front page?

if so, break their fingers and take away their admin privileges… change is not always progress.

And what about the horse he rode in on?

What in the world would you have against horses?

They can be nags.

This is a mistake.

Question 3 = Lock Her up