Trump Administration to Reimpose Sanctions on Iran With a Few Exceptions

Trump Administration to Reimpose Sanctions on Iran With a Few Exceptions

Steven Mnuchin said the administration “would not push for the total expulsion of the Iranian financial industry from a key international financial entity known as SWIFT.” 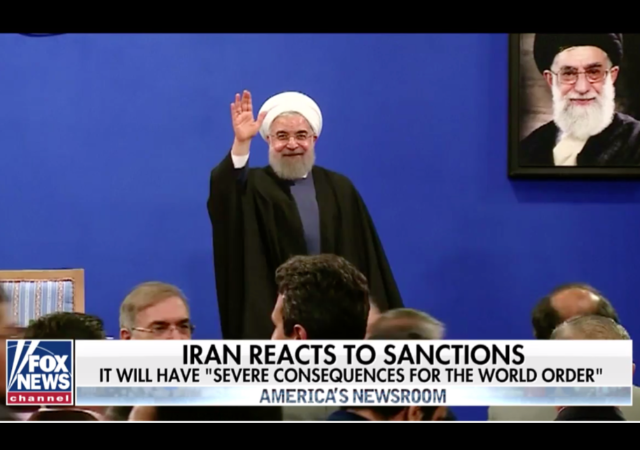 President Donald Trump’s administration has announced that it will reimpose sanctions on Iran that were terminated under the 2015 nuclear deal. A few countries received exemptions. From Fox News:

But the administration is also announcing that there would be eight significant reduction exemptions (SREs) to countries that haven’t completely eliminated oil imports from Iran. The waivers will last for a six-month period and will be re-evaluated after that time is up.

The move is the latest round of sanctions re-imposed since President Trump announced the U.S. exit from the 2015 Iran nuclear deal. In August the administration re-imposed a host of economic sanctions, drawing criticism from European leaders in particular.

The administration did not name the eight countries that will receive the exemptions, but Reuters noted Iran’s biggest customers: China, India, Italy, Greece, Japan, South Korea, Turkey, and the United Arab Emirates.

Secretary of Treasury Steven Mnuchin explained that the administration “would not push for the total expulsion of the Iranian financial industry from a key international financial entity known as SWIFT.” The Washington Examiner reported:

“Humanitarian transactions to non-designated entities will be allowed to use the SWIFT messaging system as have been done before, but banks must be very careful that these are not disguised transactions,” Mnuchin said.

He added that the list of banks disconnected from SWIFT “will be substantially longer than last time,” even if it stops short of the total blacklisting that some Republican allies of the administration had favored.

“It’s our expectation that that will be implemented as soon as technologically feasible,” Mnuchin said.

Iranian Foreign Ministry spokesman Bahram Qassemi insisted the country has “no room for any concern” over these sanctions and that the regime will “wait and see that the US will not be able to carry out any measure against the great and brave Iranian nation.”

This ought to be interesting. With North Korea being pushed into behaving nicely, Iran can’t count on them.

And with Trump showing something Obama never had, a pair, negotiations ought to be well, one sided.

Hurrah for our side!

It looks weak, and that’s because it is weak.

Why? I’m truly curious to see why this is a bad move.

Aren’t other sanctions already in place and these are additional ones? If that is the case, wouldn’t more put additional pressures on Iran? Iran is already hurting from the US pulling out of that bogus deal Kerry and Obama cooked up, so any additional ramping up seems like it would be a good thing, and it can always be added to.

Or weren’t those sanctions, which were to be automatically resumed if the agreement were dissolved, not imposed?

Their goal is to make Trump side with his national security adviser, John Bolton, and overrule Treasury Secretary Steven Mnuchin, who argued for a more cautious approach.

Led by Sen. Ted Cruz (R.-Tex), the lawmakers — who typically cheer Trump’s foreign policy moves — expect that Trump will disappoint them when he rolls out new Iran sanctions Friday. The State Department has scheduled a Friday morning call on the subject. Refusing to be associated with a policy he opposes, Bolton dropped off the call, during which Mnuchin and Secretary of State Mike Pompeo will brief reporters, according to two sources familiar with the conversations. An NSC spokesman declined to comment on internal deliberations.

The legislation, which Cruz is expected to introduce in the weeks following the midterm election, and which is likely to be cosponsored by two other leading GOP foreign policy hawks — Sens. Tom Cotton (R-Ark.) and Marco Rubio (R-Fla.) —will press Trump to cut off several Iranian banks from the global banking network known as SWIFT, an acronym for the Society for Worldwide Interbank Financial Telecommunication, which banks worldwide use for international transactions. Rep. Mike Gallagher (R-Wisc.) is expected to drop a companion bill in the House.
https://hotair.com/headlines/archives/2018/11/gop-hawks-trump-youre-going-soft-iran/

If you talk tough, better BE tough…

This may be a dumb question but, how does the U.S. tell another country that they can’t purchase oil from Iran?

It’s more coercive than routine tariffs, but less extreme than blockade (which usually requires a war).

The “down” was probably me missing the “reply”.

The whole purpose of sanctions is to put the world on notice that the US will impose restrictions on any nation or business that defies our stated policy. They often bear most heavily on US business or interests, but that doesn’t matter. If a sanction is imposed and withstands any court action, it is the policy of the US and people defying it will be hit as the sanction provides.

Quite easily actually. All they have to say is “Don’t buy Iranian oil OR ELSR!!”.

It’s the OR ELSE bit that puts the shits up other countries.

Been a lot of noise about this lately. I’m starting to think the objective here is to get Iran teetering on the edge of fiscal collapse, but *not* to push them over, in the hopes that sane people in Iran will change their course. It’s like the Venezuela strategy in a sense. The problem is detecting where the breaking point is and how *not* to roll across it.

Is that you, Baghdad Bob?