The 40th anniversary of the Jonestown tragedy

The 40th anniversary of the Jonestown tragedy

For most it was murder, not suicide 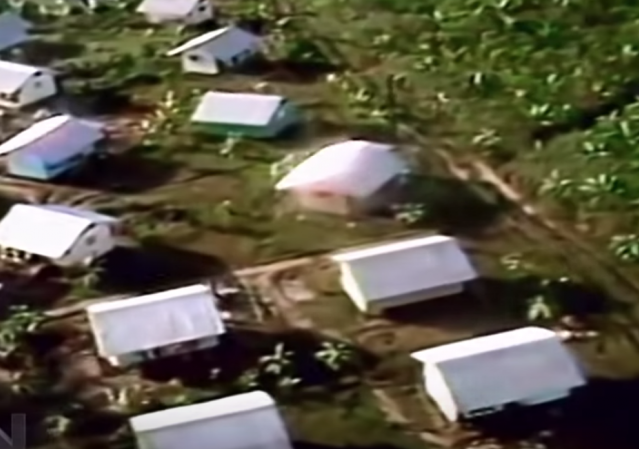 Sunday was the 40th anniversary of the Jonestown massacre, an event that caused the deaths of about 900 people (about a third of them children) who were killed at the group’s compound in Guyana.

Note that I write “were killed” rather than “killed themselves.” One of the many misconceptions about the Jonestown tragedy was that for most of its victims it represented an act of suicide. For some it did, but for many it did not. The children, of course, were not acting for themselves and were incapable of giving consent (some were infants and toddlers). And although the adults had all signed onto the Jim Jones enterprise of their own free will, many (perhaps even most?) had essentially been kept prisoner there against their will, long after the nature of the movement had changed. What’s more, as I wrote previously in a lengthy post on the subject:

According to the testimony of many of the survivors (a small group, but an articulate one), once they realized the true character of the man in whom they’d placed such hope and faith, it was too late. They were in a prison, subject to various forms of physical and psychological torture in Jones’ attempt to control the inmates. And in the final year before the terrible end, the prison we know as Jonestown was at least as isolated as Alcatraz, because it was located in the heart of the Guyanese jungle.

Two forms the psychological torture/indoctrination took are especially instructive. The first is that as Jones became increasingly paranoid, he regularly harangued his followers that they would be under attack soon, either from the CIA or the Guyanese authorities, and that mass suicide would be the only way out. In fact, he had many rehearsals for the killings, which had the effect of getting people used to what would be happening and more ready to accept it, as well as more doubtful when the real thing began to happen that it actually was the real thing; maybe it was another rehearsal?

The second was a particular type of psychological coercion described in Deborah Layton’s very fine and highly recommended book Seductive Poison. I am describing this from memory (I read the book many years ago), but my recollection is that they were encouraged to inform on each other if they heard anyone complain about or criticize Jones or Jonestown. The tattler was then publicly praised, while the complainer was subject to public harangues, physical punishment, withdrawal of privileges, and ostracism. In a totally controlled environment, this was especially difficult to take, even for those with strong personalities.

What was even more terrible—and diabolical—was the fact that Jones made some of his close confederates pretend to be be discontented, confiding their criticism of Jones and Jonestown to others. The listeners had no idea that these were false “confessions.” If they listened sympathetically and perhaps shared their own discontent, they were reported and punished. But worse, if they failed to report the confidences of their “friends”—who were actually, unbeknownst to them, Jim Jones plants—then they were punished as well.

And it is no accident that Jim Jones himself was a socialist who apparently was not really religious at all but who used religion as a screen to further his socialist ends.

Not only do I highly recommend Deborah Layton’s aforementioned book, I also recommended this much shorter article (from a book I haven’t yet read) by Jackie Speier. She was in Guyana as an aide to Congressman Leo Ryan, who had led the delegation to investigate Jonestown. Ryan and four others were murdered at the airport by some of Jones’ most devoted followers. Speier herself, 28 years old at the time, was wounded severely.

Speier’s story is astounding. It not only tells some of the tragic and terrible tale of Jones and Jonestown, but because she was part of Ryan’s crew it sheds some light on their approach and activities there. Hindsight is 20/20, of course, but it seems to me that some of Congressman Ryan’s actions were somewhat naive in view of what he did know even before going down there. There was enough evidence of possible violence to come. Ryan and Speier had met with defector Deborah Layton (the same person who later wrote the book I read) and this is what they learned from her:

We listened as she offered a detailed and disturbing account of her experience. She mentioned a Bay Area couple, the Stoens, who had defected and were fighting for the return of their young son, John. Debbie said the couple had gone to court to try to compel the Guyanese government to intervene; Rev. Jones responded by telling them that if any actions were taken to remove John, the entire Jonestown population would commit suicide.

Once, Debbie continued, Jones woke up the camp in the early hours of the morning. It wasn’t unusual for Temple members to be awakened at dawn over the loudspeaker and summoned to the pavilion for one of his increasingly unhinged sermons. But this particular morning, Jones told his followers that they had to kill themselves to keep from being tortured by mercenaries who were preparing an ambush. Debbie stood in line to drink the red liquid that she was told would kill her in a matter of minutes. When the time of their supposed deaths came and went with everybody still alive, Jones announced it had just been a drill to test their loyalty. They had passed.

We compiled similar testimonies from other defectors who corroborated Debbie’s reports of physical and sexual abuse, forced labor and captivity. We heard that the church had weapons, and that Jones was paranoid and possibly on drugs. He had engineered complete authority—collecting members’ Social Security and disability checks, and determining when and how his disciples could communicate with their families. Anyone running afoul of Jonestown’s security detail was put in a labor camp and forced to clear jungle. Repeatedly, the defectors mentioned forced participation in mass-suicide rehearsals known as the “White Night trials.”

Leo Ryan wanted answers. Never one to accept second-hand information, he decided to embark on a fact-finding—and potentially life-saving—trip.

Knowing all of that, wouldn’t it make sense that there would be terrible repercussions if the Ryan group helped a whole bunch of people defect? That was what they arranged, and not only did it end up costing many in the Congressional delegation their lives, it also precipitated the enactment of the “mass suicide” scenario, this time for real.

And all of this occurred at the hands of one demented, paranoid, and powerful person who had initially attracted followers to a Utopian ideal through his charisma and eloquence but turned out to be a Pied Piper leading them to their doom. By the time many of them realized their error they were trapped.

The details of Jonestown were unique, but the trajectory of leftist Utopian promises leading to murder was not.

I remember watching the news reports on broadcast TV memorized by the piles of bodies. It was surreal, and in a way it still is for me.

notamemberofanyorganizedpolicital in reply to Paul In Sweden. | November 20, 2018 at 5:49 pm

Remember how the Mob MSM Media reported the truth about how Dan White was a very Liberal, Left winger just like Harvey Milk the psychopath opportunist – also just like Chi-Com DiFi.

And how Jim Jones was also a Far Left-Wing Liberal whom many people had reported to the authorities as a very dangerous person, but the San Fran and National Democrat Party covered up for?

Oh that’s right, the almost 100% registered Democrat Party MSM Mob Media was covering up even than and telling lies.

Obbop in reply to notamemberofanyorganizedpolicital. | November 21, 2018 at 7:45 am

Elite-owned media does all it can to place that Islam cult in a good light. The scam goes on.

Why are there so few jokes about Jonestown…….The punchlines are too long

The Koresh incident in Waco had similar takeaways

1) the members were slimed as “delusional nutjobs” in order to quell outrage at the monstrous things Clinton and Reno ordered done to them (like suffocating the children with CS gas after being warned by an Army NBC officer that children could not survive adult doses).

2) the membera were NOT “delusional nutjobs”. Most were just everyday people who had gotten lost. And fallen prey to a False Prophet.

This wasn’t a case where they just suddenly went out and committed suicide.

They had PRACTICED THIS. Jones called them ‘revolutionary suicide practices’, according to a member of the cult. They did this multiple times – including when they were still in the US, before they moved to Guyana.

This is not something normal, rational people do.

No. Jews also “drilled” for the day government forces stumbled across their hidden shelter. Preferring death over capture does not make someone a “delusional nutjob”. Ask the Cherokee of Oklahoma, or the Marines of Baatan.

I think you have a bias against religious folk that is affecting your judgment, causing you to regard them as subhuman.

You should read their biographies. I think, like me, you’ll be wondering how people so put together could fall into such a situation.

Over 960 Jews killed themselves rather than surrender to the Romans at Masada. They didn’t want them women raped and their children enslaved. It was better to die together by their own hands. Certainly not saying the two are the same. At Masada, they literally had no other choice. At Jonestown, they were fooled into having no other choice.

notamemberofanyorganizedpolicital in reply to Fen. | November 20, 2018 at 5:50 pm

Fen have you seen this new book about that?

Fen in reply to notamemberofanyorganizedpolicital. | November 20, 2018 at 6:01 pm

I have not but I’ll check it out. Looks interesting. Thanks.

Fen: regarding your point 2: there are a lot of lonely and frightened people in our world. I wonder how many of Jones’s followers fell into that group? Today, many are the victims of charlatan tv preachers, bled dry financially, buying hope over an 800 phone line.

I do not agree with a single thing of Ms Speier’s politics. She is as far loony left as one can go. However her actions and toughness in this incident were amazing.

The comparisons of today are scary.

Many people are still willing to drink the obama kool-aid, including the kool-aid of the ‘new’ Moooochelle Obama.
https://dailycaller.com/2018/11/19/super-bowl-michelle-obama-speak-video/

Our only hope is if Mooochelle hogs all the kool-aid for herself.

At Huffpo Trump is the new Jim Jones.