Pompeo: “I promise you that doing business with Iran in defiance of our sanctions will ultimately be a much more painful business decision.” 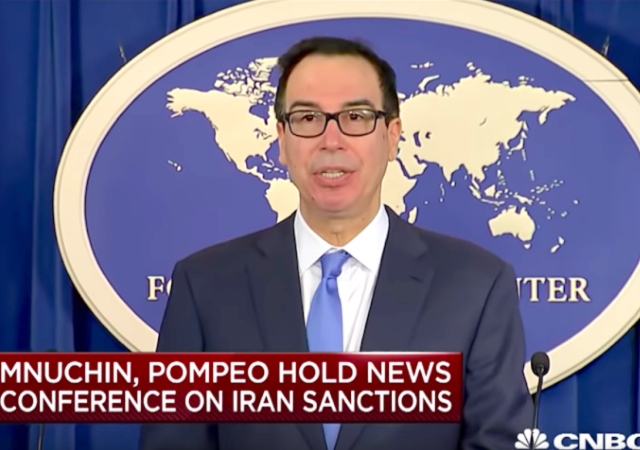 President Donald Trump’s administration has officially restored sanctions on Iran that went away with the 2015 Iranian nuclear deal.

At the same time, SWIFT, a financial messaging service based in Belgium, announced it will suspend “some unspecified Iranian banks’ access to its messaging system in the interest of the stability and integrity of the global financial system,” but did not mention the US sanctions.

The story with SWIFT deserves more attention because Europe hoped that if the company didn’t cut off Iranian banks then the 2015 nuclear deal could stay alive. Reuters stated that the company probably didn’t mention the sanctions because “it is caught between two contrary regulatory demands.

The Associated Press described SWIFT as a “network connects 11,000 banks and financial institutions in 200 countries and territories, while prizing itself on taking a neutral political stance.” The AP continued:

Without its services, Iranian banks will find it more difficult to do business with any client prepared to brave US sanctions to maintain ties with Tehran.

The Belgian-based company said Monday it would suspend “certain Iranian banks’” access to its cross border-payment network — a signal that it will fall into line with a US list of targeted financial institutions due to be published imminently.

Swift’s decision further undermines EU efforts to maintain trade with Iran and save a landmark international deal with Tehran, after President Donald Trump pulled out in May. Swift now faces the threat of punitive action under new EU rules that forbid companies from complying with the US Iran sanctions.

Since SWIFT has decided to comply with the sanctions, the EU may seek another way to keep trading ties with Iran. Back in September, Axios reported that China, France, Germany, Russia, and the United Kingdom reached an agreement to take this route.

Secretary of Treasury Steven Mnuchin insisted “that such a move could trigger sanctions against any financial institution that engages in ‘certain significant transactions’ with Iran.”

Secretary of State Mike Pompeo explained that these sanctions could “crumble” Iran’s economy. From Fox News:

On Monday, the administration said it restored previously lifted sanctions on Iranian banking, shipping and energy. Officials announced sanctions on 50 Iranian banks, 200 individuals and ships, an Iranian airline and more than 65 airplanes in what the Treasury Department said is its “largest ever single-day action targeting Iran.”

“The Iranian regime has a choice: It can either do a 180-degree turn from its outlaw course of action and act like a normal country, or it can see its economy crumble,” said Secretary of State Mike Pompeo. “I promise you that doing business with Iran in defiance of our sanctions will ultimately be a much more painful business decision.”

“We are at an economic war situation. We are standing up to a bullying enemy,” said Iranian President Hassan Rouhani. “Yesterday, Saddam was in front us, today Trump is front of us. There is no difference. We must resist and win.”

Pompeo claimed that these countries have “already demonstrated significant reductions of the purchase of Iranian crude over the past six months.”

Of course it’s going to look confused to us. We don’t have top secret clearances with need to know. We don’t know what intelligence the US actually receives through Europeans working on these projects inside Iran. It’s all but impossible for us to measure what diplomatic leverage over European countries that the US retains from picking and choosing its targets rather than flail away like a berserker.

I’m seeing the sanctions attacked as “weak” because there have been short term waivers assigned and therefore it isn’t 100% cutoff right away. In the meantime, SWIFT is complying with the sanctions without admitting out loud that this is what it is doing. More and more banks like those of S. Korea are cutting Iran off. And, the prospect of worsening sanctions looms over America’s enemies and frenemies alike.

Instead of “apocalyptic” sanctions Iran laughs about from merely surviving, they’re “weak” sanctions that are already making Iran cry out in pain, and due to worsen. Such a simple psychological difference. I’m very curious how this all works out, myself.