“With the economy growing at a strong pace, the demand for workers is unlikely to abate any time soon.”

The labor market continues to strengthen as the economy added 250,000 jobs in October and the unemployment remained steady at 3.7%, a 49-year low.

In other good news, wages increased by 3.1%.

Wow! The U.S. added 250,000 Jobs in October – and this was despite the hurricanes. Unemployment at 3.7%. Wages UP! These are incredible numbers. Keep it going, Vote Republican!

Economists predicted the economy would only add 188,000 new jobs. Wages went up 5 cents to $27.30 an hour. From The Wall Street Journal:

During the downturn, wages were growing because employers were letting go of less-experienced, lower-paid workers, leaving higher-earning workers on payrolls.

Now the opposite is occurring. With relatively few unemployed Americans looking for work, employers are increasingly having to bid up wages to poach workers from other employers. That has been happening for several years for higher-skilled workers such as engineers and welders, but now it is occurring for relatively lower-skilled jobs such as warehouse workers and home-care aides.

“Given the increasing scarcity of unemployed skilled workers, the competition for workers continues to intensify,” said Jim Baird, chief investment officer for Plante Moran Financial Advisors. “With the economy growing at a strong pace, the demand for workers is unlikely to abate any time soon.” 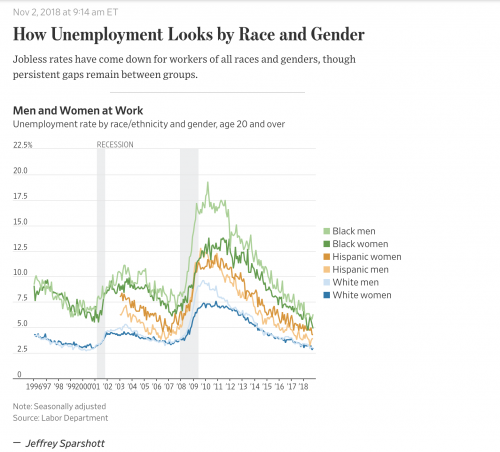 Whats all the more amazing is that in spite of the very real obstructions placed in Trumps way these last two years that this has happened! Imagine what COULD be happening today if Democrats hadn’t gone all in on the crazy and had instead spent their time working with Republicans to make America great again!!!

Except obama’s goal was high unemployment, high taxes, low wages and economic misery for the US. He would proclaim nonsense such as ‘those (manufacturing) jobs aren’t coming back.’ The propaganda arm of the dnc (msm) would thoughtfully scratch their chins and wonder out loud how we got so lucky to get this genius to run our country. obama is going down and going down hard. Sarah Palin nailed obama early on. I think something to do with his fake presidency residing in the same trash heap as his fake Greek columns.

notamemberofanyorganizedpolicital in reply to CKYoung. | November 2, 2018 at 3:56 pm

It is now close to noon and the story about this unemployment report and stellar wage growth is no where to be found on the front page of cnn.com.

notamemberofanyorganizedpolicital in reply to Massinsanity. | November 2, 2018 at 3:56 pm

The Deep State CIA (owner of CNN) doesn’t like it!

Deep State loves them some slaves.

Imagine what COULD be happening if the Republicans in Congress had unified like the Dems when they hold both Houses of congress AND the Presidency.

notamemberofanyorganizedpolicital in reply to murkyv. | November 2, 2018 at 3:57 pm

You’re talking about the Never Trumpers.

Imagine how much better this would be if we didn’t have the anti-productive Labor Department EEOC and sue everyone apparatus. Those in turn require every mid and larger co ti have an HR department and half a dozen busybodies to make everybody in the company miserable. Ditch rhat stuff and productivity would shoot up 10% in six months.

notamemberofanyorganizedpolicital in reply to beagleEar. | November 2, 2018 at 3:58 pm

One thing I really like about that graph is the way the unemployment rates for the different groups are squeezing closer together, heading toward something below 4%, a mark I’ve long been told is a sign of full employment.

There should be some amount of unemployment in a healthy market, if parents of childrearing age are able to stay at home, and if workers are mobile to change jobs to maximize their income.

The msm is so into hate for Trump that their take on the low jobless numbers is that the welfare employees will be hurt by the layoffs that are coming. They would also complain about the oncologist’s job losses if Trump found a cure for cancer!