“If Farrakhan fervently backed Trump, like an Islamic version of Kanye West, it’s easy to imagine that would be different.” 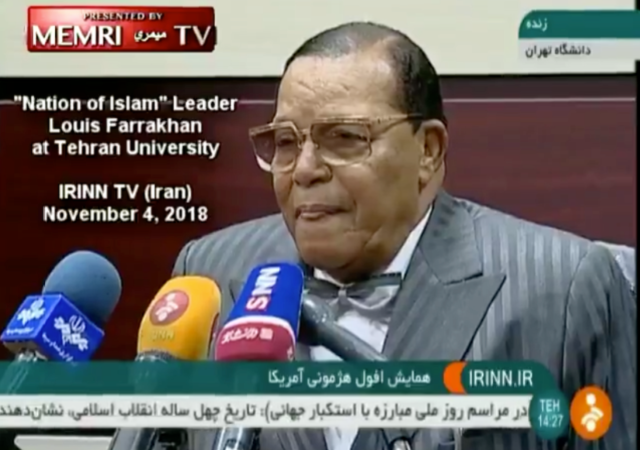 Apparently, we deplorables are of far more interest to the leftstream media than a self-avowed anti-Semite who proudly shouts that Jewish people are “termites.”  We get reams of coverage detailing the long stream of isms and phobias the left falsely imposes upon us while Louis Farrakhan’s mindless hatred of Jews is all-but-ignored.

Reality Check: Networks Did Zero (or Just Seconds) on Farrakhan in the Last Year https://t.co/r15bA3vrOy pic.twitter.com/0Z5SGizHTg

As we demonstrated in our column this week, the networks have next to zero interest in even mentioning Louis Farrakhan, even as he calls Jewish people “termites” and just days ago led chants of “Death to America” on a trip to Iran. If Farrakhan fervently backed Trump, like an Islamic version of Kanye West, it’s easy to imagine that would be different. But here’s just how little the networks have done in the last 12 months, according to a Nexis search. Fox News and CNN were exceptions.

ABC News. Zero…although Whoopi Goldberg ranting in defense of Farrakhan at Aretha Franklin’s funeral counts if you think The View is a “news” program.

CBS. The only item was an 85-word brief no one else would utter, on January 26:

JOHN DICKERSON: New York’s Daily News reports on how a 2005 photo of then- senator Barack Obama and the nation of Islam leader Louis Farrakhan was, quote, “suppressed.” The photo taken by journalist Askia Muhammad at the meeting of the Congressional Black Caucus, rather surfaced this week. The caucus raised concern the photo could impact Mr. Obama`s chances of being President. Muhammad says he handed it over to Farrakhan staff shortly afterward. The paper makes clear Mr. Obama repeatedly condemns Farrakhan`s controversial views.

NBC. One brief mention after the Pittsburgh synagogue shooting on the October 28 Meet the Press. Jonathan Greenblatt, the left-wing Obama-boosting head of the Anti-Defamation League, said “the attacks on George Soros are appalling, and the continued invocation of classic anti-Semitic themes,” and then balanced it a tiny bit by vaguely referring to associating with “a religious leader who calls Jews termites.” Chuck Todd took the note.

CHUCK TODD: — I was going to ask you about Louis Farrakhan and what — and the tolerance that some people on the left still have for him.

JONATHAN GREENBLATT: No. Yes. This isn’t an issue of left, right, it’s about right and wrong….

And he went back to generic talk. Zero heat for Democrats.