Perhaps a clever lawyer could build a case against the state of California on behalf of wildfire victims? 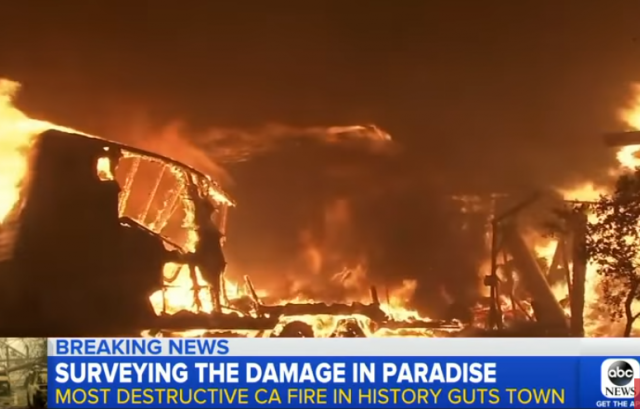 As California recovers from a series of massive wildfires, initial investigations seem to indicate that the deadly Camp Fire may have begun as a result of faulty electrical equipment belonging to Pacific Gas and Electric (PG&E).

PG&E previously had informed the PUC of another high-voltage line outage a few miles away near Pulga that occurred at 6:15 a.m. that morning. That initial incident happened minutes before Cal Fire officials say they got the first reports of a wildfire in the Pulga area that would swoop through Paradise, Concow and Magalia later that day.

As a result, PG&E is now the center of several lawsuits from victims of that blaze.

Pacific Gas and Electric Co. and its parent company were sued Tuesday in San Francisco County Superior Court by attorneys representing several victims of the Camp Fire, one of what will likely be multiple legal attempts to hold the utility responsible for the historic disaster.

The lawsuit accuses the San Francisco energy company of failing to properly maintain its infrastructure and equipment, and it claims those alleged missteps resulted in the ignition of the still-uncontained blaze in Butte County east of Chico.

Mike Danko, one of the attorneys involved in the case, believes his lawsuit is the first against PG&E in connection to the Camp Fire. He said Tuesday afternoon he expected others to be filed soon.

The most recent suit was filed on behalf of two elderly sisters who were trapped in the conflagration.

Sisters Barbara Carlson and Shirley Haley lived together in Paradise, California. Barbara had three children and seven grandchildren. On November 8, 2018, when the Camp Fire tore through Concow, Paradise, and the surrounding areas, Barbara and Shirley were trapped in their home, unable to escape. The elderly sisters tragically perished in the fire.

“This is a horrible tragedy, and one that we firmly believe could have been prevented,” said Amanda Riddle, one of the lead attorneys representing Camp Fire victims against PG&E. “PG&E has failed this family and it has failed our community.”

“The fire would not have happened but for PG&E’s practice of running its equipment to failure instead of keeping it properly maintained,” said Mike Danko. “For PG&E, corporate profits are a higher priority than the lives of its customers.”

The utility company could be under the threat of additional lawsuits for some time to come. Because so many synthetic materials were consumed during the fires, which generates toxic and potentially carcinogenic substances, residents exposed to the smoke could experience adverse health effects years from now.

While lung cancer is associated with long-term exposure to particle pollution and wood-fire smoke, it’s unclear how short-term exposure to such smoke, increasingly burning up residential areas, will affect people.

Few studies have examined exposure to wildfire smoke and long-term health effects, Rebecca Schmidt, an assistant professor in the Department of Public Health Sciences at the University of California, Davis, told The Washington Times.

…“The things we’re actually exposed to are a little bit unknown at this point,” she said. “It is likely very different than just traffic-related air pollution or ambient air pollution that’s been better studied.”

The California Department of Public Health lists a toxic combination of chemicals likely present in smoke that can be a risk factor for heart disease, cancer and neurological problems.

California has implemented numerous air pollution control regulations in the name of green justice and air quality control. Therefore, it is tragically ironic that the climate change policies prohibiting lumber operations and brush clearing have severely damaged the state’s natural resources and have potentially endangered the long-term health of its citizens.

Perhaps a clever lawyer could build a case against the state of California on behalf of wildfire victims? I assert that it bears some of the blame for the devastation.

Sorry, I just don’t believe that PGE powerlines have been the cause of all of these wildfires. If they were, then the whole west coast has a serious threat that would amount to more than the average terrorist.

But I think you meant “bears”.

Sorry, I was an English Major before I wised up.

Thank you for the catch! I am just grateful you read to the end of the piece!

1) California is an immensely corrupt one party state with no rule of law to limit the power of that state.

2) It is my understanding that PG & E is a skilled player in the art of paying off Democrat politicians in California. Therefore, they will be made immune to any penalty for any actions that they have taken that harms the peasantry.

3) Said peasants will be taxed/fined/forced to pay for any repairs to the P G & E infrastructure damaged by the fires; while yet not having any improvements to that infrastructure be made to protect said peasantry from a repeat.

There is no level of cynicism that is too much when dealing with the Peoples’ Democrat Republic of Alta California.

The frightening aspect of your comment is that no matter how cynical we peasants view this tragedy it is a truth that we are not nearly cynical enough.

Maybe it is just the California mindset, but in Florida our infrastructure improves with each hurricane.

There’s federal land over there too. Why would the lawsuits be limited to the state of California?

At any rate, I heard the governor just signed a measure allowing PG&E to avoid bankruptcy by transferring the billions in damages from lawsuits (should that happen) directly to the customers. I don’t know what else needs to be said at this point.

You know, a good prankster would be able to send a forged announcement from PG&E to various radio and TV stations with a statement:

PG&E will be shutting down all power facilities next week so that a full inspection of the power lines can be conducted, and if any of them are a threat to fire safety, they will remain shut down until repairs can be completed. Users are to expect no more than a week without electricity, so keep your freezers and fridges closed until power is restored.

Ahem. Of course, this would be illegal, and therefore wrong, so nobody do it please.

Ha. In fact, PGE issued a similar advisory a month ago, citing potential for equipment damage due to wind. When weather forecasts predicted winds sufficient to damage equipment or cause items (trees, for example) to damage lines and thus cause fire, they would shut off power in those portions of the grid until the hazard abated.

If that’s not what happened in real life one must wonder why.

Because if they *do* pull the plug during a windstorm, tens of thousands of irate customers will call. If they *don’t* pull the plug, they *might* have a fire.

It’s a balancing act. Besides, if they pull the plug, they’re going to get the State hammering on them for fearmongering and various other hateful things. Lawsuits on the left, lawsuits on the other left.

And they did “pull the plug” and created a sizable crowd of those unhappy people. There was also a tree that fell on a line (says PGE) resulting in those people being without power for some 2 days. This was all before the Camp Fire.

There are winds in the 20-30 mph range predicted today in the central foothills, so there may be a repeat performance, depending on the secret formula used to determine how much wind is too much wind.

The lawsuits are already being filed.

It rests squarely on jerry brown’s head: but for his veto of legislation for prevention of exactly this kind of thing, ther would not have been the fires.

“Perhaps a clever lawyer…”
Avenati is on it.

The State of California and PGE have an excellent defense.

The UN, Sierra Club, World Wildlife Federation, Green Pieces, AARP, Democratic National Party, etc., and thousands of concerned scientist, have proven that Man Made C02 has increased the temperature of the world and thus made forest fires happen.

This is SETTLED science. Therefore, this case should be thrown out since the cause is C02, as proven by all major Universities, etc.

These people filing law suits are CLIMATE DENIERS and I believe in some areas that in itself is illegal, immoral and unethical. I imagine most, if not all, of those who lost their houses to Global Warming, accept and support the C02 reason for the loss of their homes (which they also knew should not be built in Old Growth Spotted Owl habitat !!)

Practice what you preach and stop exhaling CO2.

Stop being a science denier yourself. Don’t you know that plants need CO2 to live.

On my second reading of your rant, I realized that you simply forgot to add an [end sarcasm] tag.

I don’t recall seeing anything about whether PG&E clear-cuts their right-of-ways. I have an LCRA main line running just behind my property and they’ve got a (at least) fifty foot clear-cut strip (same goes for the gas line that makes up one of my property lines). Cuts down considerably on the fire danger, although I haven’t heard of LCRA having anything like the maintenance problem that PG&E has, and when they get mentioned with respect to fires, it’s usually in conjunction with them funding a grant to upgrade local fire resources.

So maybe someone can explain to me how someone can expect to recover damages when the actual source of ignition for this fire is only assumed at this point.
Yes I understand that the filing is necessary to preserve evidence but it seems premature to me.
And going after PG&E makes sense in a way. They are the ones with the money, while the state of Failafornia is in debt upto their eyeballs.