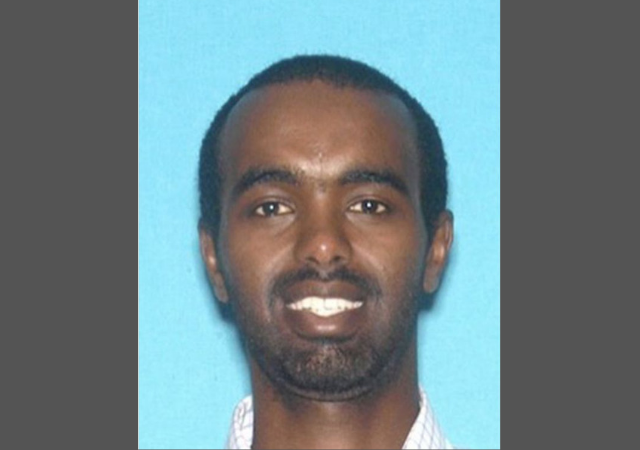 The driver yelled anti-Semitic remarks at the men Friday night, made a U-turn and drove at the pair, who took cover behind a car and an electrical box, said Deputy Chief Horace Frank.

The suspect made another U-turn and targeted the men, then tried to speed away but crashed into another car in the largely Jewish Wilshire-area neighborhood, Frank said.

No injuries were reported.

The suspect, Mohamed Mohamed Abdi, was born in Mogadishu, Somalia, but is now a U.S. citizen, officials said. The 32-year-old was arrested for investigation of assault with a deadly weapon and remained jailed. It wasn’t known Monday if he has an attorney.

The FBI joined the investigation, and Abdi could face federal charges, Frank said.

Police Chief Michel Moore said investigators believe Abdi was acting as a “lone individual” and not as a member of a group, but the investigation was continuing into his background and associations.

Unlike other attacks, there’s video of this one. And yet, you probably haven’t seen the story on the news.

As Newsbusters points, out, the attack was noticeably absent from network news coverage.

All three networks have failed to report on an alleged attempted hate crime against two men leaving a Jewish synagogue last Friday in Los Angeles. While another anti-semitic hate crime in Pittsburgh October 27 received mass coverage, the alleged suspect’s identity in this recent attack may be one reason why it hasn’t received any coverage on the major networks thus far.

As The New York Post and The Los Angeles Times reported, Mohamed Mohamed Abdi, a 32-year old man born in Somalia, shouted anti-semitic slurs as a group of worshippers, dressed in orthodox attire, were exiting a synagogue before making a U-turn and trying to run over two of them. After a second failed attempt, he eventually crashed into another car in the predominantly Jewish neighborhood.

At the time this post was written, national network news had not covered the story.

It dosen’t fit the narrative. Religion of Peace, don’t ya know!

Also, The dinosaur media knows that if you report the “wrong” story, the wrong way, the followers of Islam will really put a hurt on you. And that will be ignored also.

Obamagants. There’s a reason Odumbo worked so hard to sneak them in.

And what ‘news’ networks? You mean the democrat media, don’t you?

Hey he’s just a guy named “Mo’. Fits the profile of a lot of terrorists.

His family says he’s schizophrenic—I’ll concede that. But his name is Mohammed Mohammed Abdi.

So which of the two guys named Mo did it?

Not legally possible. In this case not even he can be expelled because he’s a citizen, and there’s no reason to suppose there was anything wrong with his naturalization.

da reeligohn of peas are all schizophrenic.

Thank goodness nobody was killed … because then we might have to report it.

‘Two oddly dressed pedestrians, wearing dark clothes, were killed after repeatedly running in front of a Prius driven by a shocked student looking for an address. Police are awaiting identification and an explanation as to why their behavior was so erratic. Unnamed witnesses said the deceased repeatedly were taunting the driver by being in front of the car as the driver negotiated the neighborhood. Toxicology results are pending.’

It is almost like the left hates conservatives Jews or something. Oh wait……They do. They would rather have them die than deal with Muslim bigotry.

Hell, you could barely find it on the LA Times web page. It was in a sidebar in minuscule type.

Extremely irrelevant nitpick, but I hate it when news reports get something wrong. This happened at 9:30 PM on a winter Friday, I doubt the two would-be victims were leaving the synagogue. It’s not completely impossible, but it’s unlikely. Candle-lighting that day was at 4:25, so most synagogues were empty and closed by 6ish. I happen to know that synagogue a bit, I’ve been there a few times, and there would have been lots of people still there for another hour, but by 7:15 I expect everyone would have gone home. At 9:30 these two guys would have been out for an after-dinner walk, perhaps heading to someone’s house for a party to welcome a newborn son. It’s possible someone was having such a party at the synagogue instead of at home, and they were coming from there, but far more likely they just happened to be walking past it when this Trump-loving white supremacist Moslem drove past.

Chip the SOB and dump his a$$ back in his $hithole country 🙂 Sally “Mrs. Meathead” Struthers can rub sugar on him and then release the flies so we can feel sorry for him 😉

Not possible. He’s a US citizen, so this is his country as well as ours, and citizenship cannot be taken away involuntarily no matter what a person has done.

All western countries need to wise up and stop accepting Muslims. There is clear evidence that they do not assimilate and that they take advantage of those who allow them to immigrate.

They also need to classify Islam as a subversive cult. Failure to contain Islam could well lead to a new dark age.

There is no such thing as a “subversive cult”. The constitution requires us to treat all religions the same.

And most Moslems do behave like civilized people; the problem is with the minority who don’t.

Have you been looking at what all those inbred Muslims are doing in other countries? It does not matter what most Muslims are doing? Their nastiest members rule the roost, often by killing their fellows who do not keep their yaps shut. They have no innate right to be here, allowing more into America is foolish.

But the minority is HUGE. Fact.

It doesn’t matter how big the savage minority is, and it wouldn’t matter even if they were a majority. Each person must be considered as an individual, and discriminating against someone merely for being part of a set of people, some or most of whom have a certain undesirable trait, is the very definition of bigotry; in the US it’s illegal, and when the government does it it’s unconstitutional. In deciding which would-be immigrants to admit it isn’t technically illegal, only because they’re outside US jurisdiction, but it goes against everything the US is supposed to stand for.

> There is no such thing as a “subversive cult”.

Are you denying that cults exist? We had no knowledge of cults until the 1950s Commie prison camp brainwashing, then all the “new religions” of the 1960s.

I have to check in with my Antifa cell leader who will, in turn, check with the local Red Brigade cell who will then contact the beloved enlightened Mr. Soros to get the official opinion regarding this story and the supposed boycott of the story by our glorious free-press mass media so often besmirched by the Alt-Right HATERS KKK-supporting White trash filth. After I receive the official proclamation I will share that with you folks here seeking enlightenment and the proper path to follow.

It has always amazed me that the idiots in the msm and Hollywood haven’t learned that the first thing that sharia destroys is open news and immoral movies. These fools would be the first to go under sharia law and they would scream for the US military to save them!

It seems somebody was reading my comments about how synagogues should install multiple cameras to record vandals and other criminal activities. Identifying, arresting,and prosecuting creeps will reduce the crazies in the neighborhood.