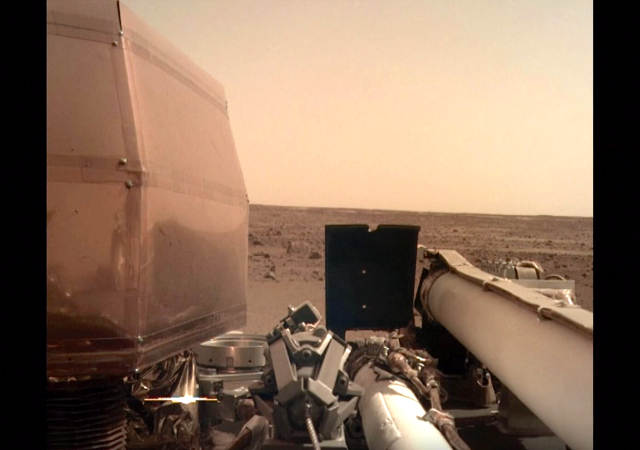 The National Aeronautics and Space Administration’s newest exploration vehicle InSight landed on Mars on Monday with much social media fanfare on earth.

Mission Control at NASA’s Jet Propulsion Laboratory exploded into celebratory applause and cheers after the touchdown was confirmed. The landing was watched around the world and even broadcast live on the Nasdaq Stock Market tower in New York City’s Times Square.

During a post-landing NASA press conference, the astronauts on the International Space Station called down to congratulate the mission team and said they “got some goosebumps” watching the coverage.

“Today, we successfully landed on Mars for the eighth time in human history,” NASA Administrator Jim Bridenstine said. “InSight will study the interior of Mars and will teach us valuable science as we prepare to send astronauts to the Moon and later to Mars. This accomplishment represents the ingenuity of America and our international partners, and it serves as a testament to the dedication and perseverance of our team. The best of NASA is yet to come, and it is coming soon.”

The team of scientists working on Mars hope to use “marsquakes” to study the Red Planet’s interior.

InSight is the first dedicated to unlocking secrets from deep below the Martian surface. The lander will spend 24 months – about one Martian year – using seismic monitoring and underground drilling to gather clues on how Mars formed and, by extension, the origins of Earth and other rocky planets of the inner solar system more than 4 billion years ago.

…InSight’s primary instrument is a highly sensitive French-built seismometer, designed to detect the slightest vibrations from “marsquakes” and meteor impacts.

Scientists expect to see a dozen to 100 marsquakes over the course of the mission, producing data to help them deduce the size, density and composition of the planet.

Our Mars Odyssey orbiter phoned home, relaying news from @NASAInSight indicating its solar panels are open & collecting sunlight on the Martian surface. Also in the dispatch: this snapshot from the lander’s arm showing the instruments in their new home: https://t.co/WygR5X2Px4 pic.twitter.com/UwzBsu8BNe

A fascinating aspect of this mission is that its program is based from the studies conducted by the Apollo teams that went to the Moon.

After Neil Armstrong took his famous first steps on July 20, 1969, Buzz Aldrin hauled two pieces of luggage out of the Eagle and unpacked them on the lunar surface. One contained a seismometer for recording meteorite impacts and moonquakes. The other was a reflector, off which scientists could bounce a laser beam to precisely measure the moon’s distance from Earth and track its movements to learn more about its composition and structure.

A moon landing is now a goal for the Russians, and one Russian joked that they wish to prove that the United States actually landed there.

A proposed Russian mission to the moon will apparently include a task to verify that the American moon landings were actually real, a top Russian space official joked Saturday.

Dmitry Rogozin, the head of Russia’s Roscosmos space agency, was responding to a question at an event about whether or not NASA actually landed on the moon nearly 50 years ago when he made the remark, the Associated Press reported.

“We have set this objective to fly and verify whether they’ve been there or not,” Rogozin said in a video posted Saturday on Twitter.

As NASA has recently announced it will be returning to the moon, it looks like another space race is on! I like our chances.

Best of the Week

That we landed on the Moon is indisputable; one of the Apollo flights removed and brought back Alice Kramden’s kitchen apron as proof,

This is really amazing stuff. Way to go Lockheed and NASA!

That mars landing was about the dumbest thing. Sure it’s cool that we landed something there, but the hype about the ‘live landing’ was silly. The only thing ‘live’ was everyone in the mission control started cheering, it hardly qualifies as something you would want to watch ‘live’. At the least, they could’ve provided us with some kind of telemetry, like ‘altitude’ that you could follow, or even some kinda graphic, like an ant landing on a basketball. *Something*.

Also, all the silly SJW ‘women in STEM’ was in very much front and center for that webcast. I wanted spaceships and martians and got politics, how sad.

You need to be MORE PC and notice what you don’t notice.

I see a huge class-action EOE and ACLU law suit coming for the HR department at this “good ol’ boy’s” club.

No Hidden Figures. No Clock Boy. Nope. Just Mayo. This video makes MAGA look like what the Left fears the most, since it is right in front of our faces.

When I was launching Space Shuttles, the Women OTCs and TPEs were the best. Yeah, I’m talking about you Roberta, Teresa, and Melinda…

I can’t help but noticing something very odd about that room full of scientists. It just can’t be.

NASA mainly awards contracts and shuffles government money around. The actual work is done by private firms or engineering schools. JPL has run the unmanned space missions for decades. If the government ran them, they’d be more like the Post Office or the VA Administration.

So, do they keep getting Participation Trophies every time they repeat the same act?

It’s not like there aren’t plenty of interesting things to be done. I remember the first photos of the far side of the moon. Now that was interesting—since humans first evolved they’ve been stuck looking at the same ol’ near side. Of course that was Luna 3, which had nothing to do with NASA or JPL. Maybe things were easier to discover ‘way back then.

This is a grand American accomplishment. If you are not inclined to see it as so, you are a Luddite unimaginative lump. It could not be ‘live,’ it happened 8 minutes earlier. You do understand why,don’t you.

The transmission delay added more ominous drama to the landing. As JPL narrated the landing, we knew that IT had either made it or crashed… it had already happened and there was nothing that could be done but go along for the ride. The complexity of Curiosity’s landing really made it a nail biter.

Kudos to JPL for great flight management. Ray Bradbury would have been very happy…. just be wary with that first manned mission….

Years ago on “I’ve Got a Secret” (1950’s)the contestant answered the panels question with one or two beeps… which displayed about a 2 second delay. The panel didn’t do the math… it was a radio transmission being bounced off the moon’s surface that was the path for the beeps.

I wish NASA was given the right directive to achieve as much in human space flight.

After locating Rover and restoring its solar panels, the pair initiate a data strike until NASA hires more women and people of color.

Martian2: So we wait for the Chinese, I guess. Go check the flux capacitor. The FTL drive felt sluggish this run.

I know a NASA couple. She does some kind of safety and quality control. He is a Rapier instructor in our club and a literal rocket scientist. But they don’t like to talk shop because their friends always turn it into a 60 Minutes interview.

Yeah, this was an excellent outcome for a challenging task partially completed thus far. But nowhere near the challenge they accepted when His Imperial Executiveness ordered them to commence scientific outreach to bring Islamist countries into the 19th century.

Bringing Islamists into the rocket science world would really complicate things. We’d have calculations done in meters, feet, and rocks (I was going to say stones, but that actually is a unit).

I could see a Branco cartoon of two Islamists scientists looking at their rocket, then the moon, and one saying to the other “we are going to need a bigger bow (apologies to Spielberg).

see, the Feds CAN actually accomplish something, when they meet 3 criteria:

1 – don’t give in to SJW and PC madness and simply demand results regardless of the lack of diversity;
2- thrown a LOT of money at the problem; and
3 – hire a good private market company to do the heavy lifting