Mueller Claims Manafort Lied to the FBI, Investigators ‘On a Variety of Subject Matters’

Mueller Claims Manafort Lied to the FBI, Investigators ‘On a Variety of Subject Matters’

“As the defendant has breached the plea agreement, there is no reason to delay his sentencing herein.” 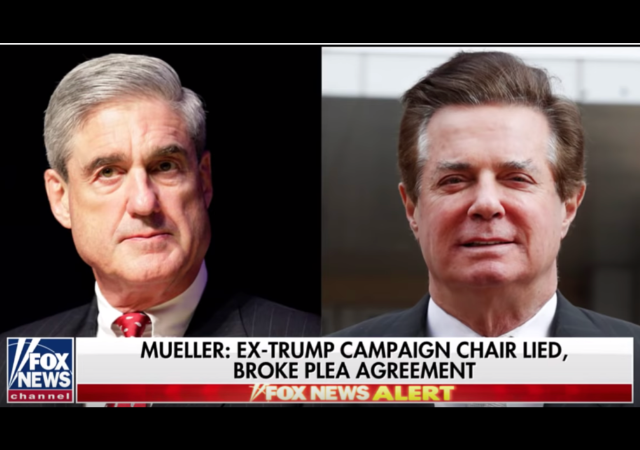 Special Counsel Robert Mueller claims that Paul Manafort, the former chairman for then-presidential candidate Donald Trump, lied to the FBI and investigators “on a variety of subject matters,” which means he broke his plea agreement. NBC News continued:

Manafort, 69, was convicted of eight counts of tax evasion and bank fraud in August. In September, he agreed to cooperate with Mueller’s investigation when he pleaded guilty to two new counts and admitted his guilt to 10 counts outstanding from the earlier trial in Virginia.

On Monday, prosecutors with Mueller’s office told the court that “after signing the plea agreement, Manafort committed federal crimes by lying to the Federal Bureau of Investigation and the Special Counsel’s Office on a variety of subject matters, which constitute breaches of the agreement.”

The two-page document doesn’t say what the government believes Manafort lied about. But Mueller’s team said it would file a “detailed sentencing submission” detailing what they said were his “crimes and lies,” which could be filed unsealed.

Here is a screenshot of the document: 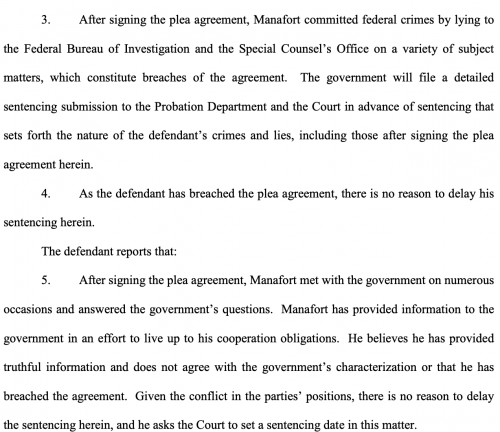 The plea agreement meant Manafort forfeited “multiple bank accounts and properties – including his apartment in Trump Tower in New York – and to cooperate with investigators by participating in interviews, providing documents and testifying in court.”

As it is, the plea agreement specifies that if prosecutors decide that Mr. Manafort has failed to cooperate fully or “given false, misleading or incomplete information or testimony,” they can prosecute him for crimes to which he did not plead guilty in the District of Columbia. They could also conceivably pursue the 10 charges on which the Virginia jury failed to reach a consensus. Mr. Manafort is scheduled to be sentenced in the Virginia case on Feb. 8.

The judge dismissed those 10 charges without prejudice.

Plus, breaking the plea agreement means that Mueller and his team “has no obligation to inform the court about any helpful cooperation he may have provided, which could have lessened his sentence.” The team can also present the “fact that Manafort admitted guilt” to those charges.

Truth isn’t what they want to hear. They want lies that support their own lies.

Four in you count this one. Still a good point x3

So still nothing to do with Russia then?

I suspect this Guardian story about Manafort meeting Assange multiple times before joining the Trump campaign is meant to keep the idea of Russian malevolence fresh. The obvious inference is that a) Assange is a Russian agent, b) Manafort is a Russian agent, c) the two worked together against Ukraine’s Yulia Tymoshenko (the current, post-revolution President has her as an enemy too, go figure), d) Trump hired Manafort because of Manafort’s Russian intelligence connections, placing him in position to e) coordinate use of GRU-hacked not-Hillary DNC emails and a host of other activities, making the entire Trump campaign an extension of Russian intelligence with Trump’s personal knowledge and approval.

All without having to prove a single element thereof. It looks so easy from a distance. And I’m sure Mueller’s team had nothing, absolutely nothing, to do with this Guardian story, no sir…

That’s exactly what it was, and it was fabricated by Muller to keep the Manafort Russia narrative alive.

This may give Manafort an excuse to go after Muller, and/or win a funding judgment against the Guardian, who published and likely collaborated on the false story.

After this giant nothing burger, I can’t wait for the subpoena cannon to start firing.

Immediately following Corsi’s interview wherein he accuses Mueller of attempting subornation of perjury. One suspects they are trying to keep Manafort silent.

i figure everything released by Mewler & his team of partisan hacks is BS.

but it’s BS with the full weight of the politicized DOJ behind it, so, if they pick you, you’re screwed.

It’s beyond clear that Muller is a criminal.

Mueller: I call my star witness, that guy I have been calling a perjurious scoundrel of low credibility

I’m curious – did you pick this story up from Rags or were you already working on it?

The Rags Komando of the Stasi soldiers on…

Rags: “The Rags Komando of the Stasi soldiers”

And his sidekick: The Accuser, Stolen Valor Barry.

You guys look adorable together.

Hey nitwit Fen, the smilie was in acknowledgement of your comment.

You don’t pay attention to much of anything if you think I’m a sidekick of the board idiot.

Nor did I steal any “Valor”. You’re apparently not smart enough to understand the term.

Go back to bitching about Fuzzy. It suits you better.

Lies? I hope Mueller does not have any mirrors in his offices.

He’d probably go all Dorian Gray on us

So, the place to work is the “justice” department. You know if the shoe was on Mueller’s foot – or ANYONE else’s — that it would be easy to say they lied. Memory is an imperfect thing which the left will push all the time when they’re trying to get their murderers off death row, but it’s flawless when one of their political opponents says something differently or omits something.

Tired of watching Mueller persecute people for beating Hillary. Mueller – she was going to lose anyway. NOBODY LIKES HER.

Will the DOJ PLEASE prosecute Mueller for this witch hunt?
Thank you.

I thought it was the Just Us Department.

Amazing how All of (almost) Madame Presents Women were immunized. No lying to investigator charges.

Why its just AMAZING. Mueller will see what he wants to see.

What is amazing is repubs control everything but uncle bob is investigating/persecuting them.. Don’t get it but …

An anonymous dossier states that Mueller frequently flies to St. Petersburg with copies of these process crime transcripts and hires Russian prostitutes to read them outloud while he enjoys himself.

Don’t go away mad, Robt. Mueller, just go away. History will not be kind to this guy.

The GOP is mad because they tried to liose the Senate but Trump stopped them. They hate Trump as much as the crats do. Now they will either aid in impeaching or try and lose in 2020. They want the status quo corruption to continue. Once the House files impeachment Trump loses his power of pardon. He has about 30 days to act or he will be gone next year.

The House can impeach, but they need 67 votes in the Senate to remove. Not gonna happen. I would say, go ahead… make my day, impeach. Pretty much expends their ammo, and immunizes Trump from there on out. Then it would be, “Impeach”? Ya already did that.

IF it takes you 2 years to investigate anything, then there is really:

Mueller’s Merry Band will provide the Judge a list of times when Manafort lied:

1. He said he liked Tutti Frutti just as much as Chocolate Ice Cream.

All of this because the uniparty has been bought and paid for by globalist interests, until President Donald J. Trump exposed them. If russian collusion is a crime, isn’t mexican/central American collusion a crime? Meaning anyone for open borders, anyone in favor of illegals influencing our elections, anyone opposed to voter ID, all of those people (aka democrats) need to be investigated and imprisoned the way Manafort was.

Here we go. The beginning of the end for Trump