Mexican Ambassador to U.S.: ‘There are People That Have Criminal Records’ in Migrant Caravan

Mexican Ambassador to U.S.: ‘There are People That Have Criminal Records’ in Migrant Caravan

“I can understand why the president and other people here are concerned about what is going on.” 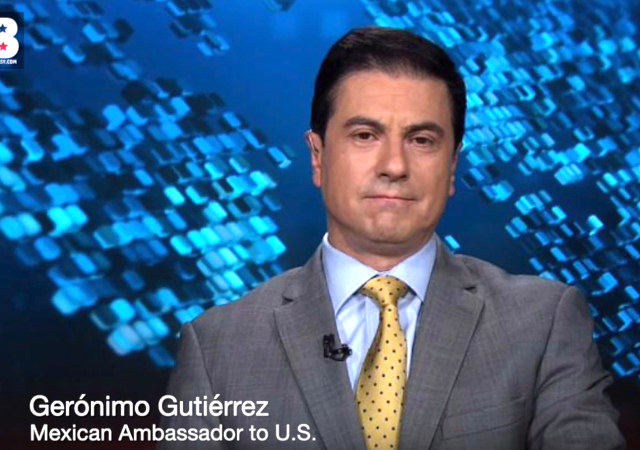 Mexican Ambassador to the U.S. Geronimo Gutierrez spoke to The Washington Examiner about the migrant caravan that is near our border.

While everyone bashes President Donald Trump over his criticisms of the migrants, Gutierrez confirmed that the caravan has people in it with criminal backgrounds.

The Department of Homeland Security estimated that 500 criminals have integrated themselves into the caravan. Gutierrez couldn’t confirm that number, but he agreed with the concerns shared by the administration:

“I think that those numbers, precisely, were, I don’t know exactly where those numbers are coming from but I do know we have strong cooperation with the United States to identify people that have criminal records that are coming into our region, and that just makes sense, and that’s an example of the good cooperation that Mexico and the United States have,” he added.

“I don’t know where that number of 500 – I’m skeptical about it,” Gutierrez said. “I mean, we share the opinion that there are people that have criminal backgrounds in that group and yes, the numbers I cannot comment because the numbers are, I just don’t think there’s enough clarify about what those numbers come from.”

Gutierrez disagrees with Trump description of the caravan as an invasion, but he said that he understands “why the president and other people here are concerned about what is going on.”

He also stressed that the caravan proves “that there’s a very significant need to address legal changes here in the immigration system and certainly also in Mexico.”

On Monday, DHS officials told reporters that their intelligence on Sunday night had indicated that a group of migrants wanted to run through the car lanes of a border crossing near San Diego. Customs and Border Protection shut down all northbound lanes of the crossing from 3 a.m. to 6 a.m. as a result. However, the ambush was never attempted.

Paying informants, placing officers in the region or monitoring the communications of non-U.S. citizens is not illegal, said John Cohen, former acting undersecretary of intelligence for DHS, but it does raise some concerns about the allocation of resources.

“Those resources have to come from some place. They are not being devoted to thwarting terrorist threats, mass shootings, mailed fentanyl coming into the country or cyberattacks,” said Cohen.

Mike blogged yesterday that citizens in Tijuana have started to protest the caravan as migrants made their way into the town.

Protesters shouted, “Out! Out!” and “We don’t want them in Tijuana.” The process for asylum is slow as border inspectors only process 100 claims a day.

Tijuana is not prepared for the migrants:

Tijuana Mayor Juan Manuel Gastelum has called the migrants’ arrival an “avalanche” that the city is ill-prepared to handle, calculating that they will be in Tijuana for at least six months as they wait to file asylum claims. Gastelum has appealed to the federal government for more assistance to cope with the influx.

Mexico’s Interior Ministry said Saturday that the federal government was flying in food and blankets for the migrants in Tijuana.

Tijuana officials converted a municipal gymnasium and recreational complex into a shelter to keep migrants out of public spaces. The city’s privately run shelters have a maximum capacity of 700. The municipal complex can hold up to 3,000.

Our betters in the MSM assured us that only good people were coming, that there were no bad guys with them. CNN couldn’t find any and they were looking really hard…

We were told, TOLD, that it was just families fleeing oppression and gang violence. And today we find out that, instead of fleeing gang violence, they have gang members with them?

Oh, and this turd: “…John Cohen, former acting undersecretary of intelligence for DHS, …raise some concerns about the allocation of resources.

“Those resources have to come from some place. They are not being devoted to thwarting terrorist threats, mass shootings, mailed fentanyl coming into the country or cyberattacks,” said Cohen.”

“Those resources have to come from some place. They are not being devoted to thwarting terrorist threats, mass shootings, mailed fentanyl coming into the country or cyberattacks,” said Cohen.

Yeah, but those resources are being used *successfully* to prevent known criminal activity. So buzz off, nitwit.

Sorry, our comments passed each other. I think you said it more succinctly

Emigration reform in order to reduce collateral damage at both ends of the bridge and throughout. Also, a good neighbor policy, where people tend their own “gardens” (e.g. nation), and offer aid when necessary or requested to promote the former. American and Mexican civil rights, life, and health, should not be light treated for causes of social justice, democratic leverage, secular religious profits, or business interests.

NBC traitors letting the caravan members know that there are paid informants. Or maybe Cohen is the traitor for telling NBC.

The process for asylum is slow as border inspectors only process 100 claims a day.

I see no mention of concern in Tijuana about what to do with asylum applicants who are rejected. Perhaps there aren’t any. If “process” means “allow to sail on through,” this foreign invasion will be successful.

If I understand the new policy correctly (called “Stay in Mexico”), the idea is to force them to complete and submit their requests for asylum in Mexico but here is the catch: they have to make their case that they fear persecution at the hands of Mexico. That is interesting if true.

The proper procedure has been to apply for asylum at a US Embassy or consulate in your country of origin. But since Mexico allowed this mob through their southern border and assisted them along the way to the US border, they became Mexico’s problem. In other words, they are stuck in Mexico.

Tijuana has already lost patience and at 100 applications per day which projects to 1,000 to 1,200 (and growing) days to work through, this will soon become a pressure cooker of tensions between Mexican citizens and their government. The cartels control most of Mexico so the solution may not even be available to the Mexican government. They will need our help eventually.

If the invaders decide to storm the border, it is no longer a policing issue but an all-out invasion which is why our troops are there. People will get killed and rightly so. This will not be good for Mexico. Over 100,000 Mexicans legally cross the border each day to make a living. That will end.

At some point, Mexico will have to step in and separate the women and children and take them away from danger. The invaders, facing the reality that many will die if they don’t rethink their plans, might rethink.

Maybe the ambassador’s charge of narrative signals that the solution is already afoot. We don’t want these hoodlums and neither does Mexico. Maybe that is what is being negotiated.