Man who shouted “Heil Hitler, Heil Trump” at Fiddler on the Roof performance is anti-Trump, contrary to initial media reports

Man who shouted “Heil Hitler, Heil Trump” at Fiddler on the Roof performance is anti-Trump, contrary to initial media reports

The man said the play “reminded him of his hatred of President Trump.” 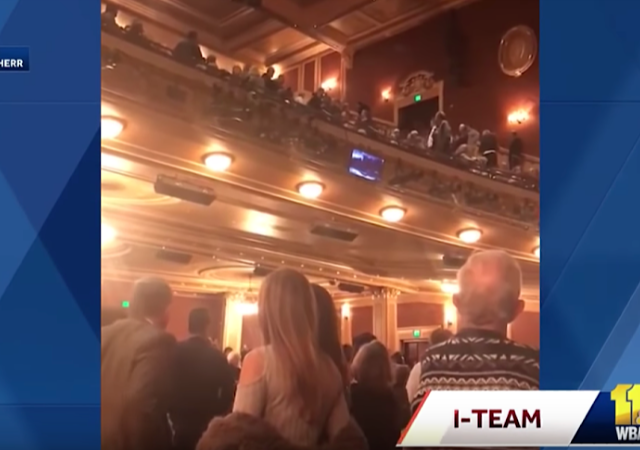 On Wednesday night, a man in Baltimore shouted, “Heil Hitler, Heil Trump” during a production of Fiddler on the Roof.

When reports came out, outlets like Mediaite and The New York Post referred to the man as a President Donald Trump supporter. I scoured previous reports and most of them buried this simple fact:

As John Nolte at Breitbart pointed out, The Hill is the only publication that came out with a truthful headline and did not bury the lede:

The man who yelled “Heil Hitler, Heil Trump,” during a theater performance of “Fiddler on the Roof” this week reportedly said he made the statements because the production reminded him of his hatred of President Trump.

Anthony M. Derlunas II, 58, told Baltimore Police that he yelled the slogans because the final scene before intermission reminded him of how much he despises the president, according to The New York Times.

The Times noted that Derlunas also claimed that the anger directed at him after he shouted the slogans was because of what he claimed must be a high number of Trump supporters at the show.

Derlunas on Wednesday night began yelling from the balcony during the intermission of “Fiddler on the Roof” at Baltimore’s Hippodrome Theatre.

Fox News did not have the fact the man hates Trump in the headline, but like The Hill, the network did not bury the lede.

Derlunas received charges of disorderly conduct. Police decided to provide extra security for the remaining shows of Fiddler on the Roof, which tells the story of a persecuted Jewish family in Russia.

Did anybody reasonably think otherwise?

Interestingly, one thing I didn’t glom onto as a little kid but was immediately apparent years later as an adult – the social movement the young man was part of that was throwing away these outdated traditions?

why was this looser at the show ?

If hitler went around denouncing antisemitism, supported the right of the state of Isreal to decide where it’s Capitol is, and was opposed politically by groups who hate Jews and Israel only a little less than they hate trump.

Baltimore? Why are liberal bastions such hot beds of hatey white supremacist hatred. You never hear of this kind of s**t in Midland, Tejas. Why is that?

Oh, wait, I didn’t exactly fall off the turnip truck this morning.