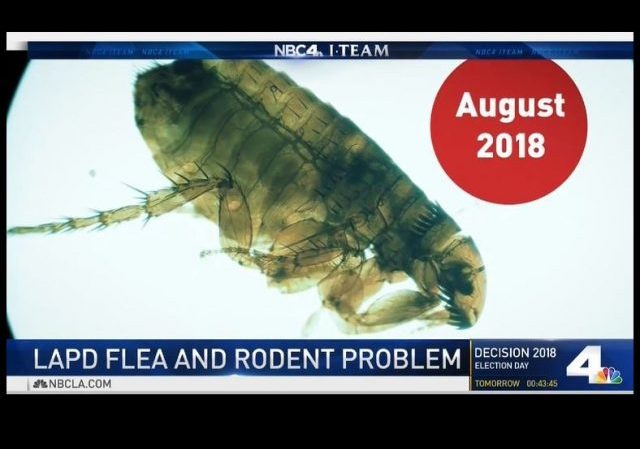 We recently reported that over 100 people in the Los Angeles area have contracted the bacterial disease typhus, and the area’s public health officials are sounding the alarm about the infectious disease spreading.

At the epicenter of the epidemic are the homeless camps, and the Los Angeles Police Department station nearest to the city’s Skid Row is battling the rats and fleas that spread the typhus bacteria as the officers attempt to protect themselves from becoming ill.

The LAPD confirms to the NBC4 I-Team there may be “a flea and rodent problem” inside the Central Station near Skid Row, home base for over 350 officers. This past Friday, the LAPD closed down the station to fumigate for fleas that could carry typhus. The station has been fumigated repeatedly since August but officers say the flea problem remains.

“They’re in the desk drawers, on the floor, they’re in the patrol cars,” an LAPD cop, who asked not to be named for fear of retaliation, told the I-Team. “In one case, the employee looked down at his pants and noticed it was covered with at least fifteen fleas,” the cop added.

Another LAPD employee filed a complaint with CAL OSHA over the flea problem, according to documents obtained by the I-Team.

In fact, KABC Los Angeles reported that last week the LAPD Skid Row station was fumigated once again in this ongoing battle against contagion.

There are an estimated 32,000 homeless people in the city. To help address this crisis, Los Angeles recently won a $1 million grant from Bloomberg Philanthropies to pay for an experimental backyard housing program for the homeless. This is in addition to the $100,000 from Bloomberg to study the idea.

On Monday, the city won an addition $1 million to test the idea in real life. Los Angeles is one of nine winners of the US Mayors Challenge, a yearlong Bloomberg Philanthropies competition that tasked participants with developing innovative solutions to the nation’s toughest urban problems.

As the city refined its idea, the county was developing its own backyard program, which sets aside $550,000 for residents to convert their units or secure necessary permits. While the county received interest from around 500 homeowners, its funding only allows for three new backyard units and three renovated structures to be built.

I hope the plans for backyard housing include preventing the homeless from taking the rats and their fleas with them to their new accommodation. If not, typhus will spread to other communities and the LAPD Skid Row station will not be the only one experiencing a health crisis.

Shades of AIDS, redux: let’s see what we can do to help this spread, they say.

Reading this, I find it difficult to keep from thing that a great calamity awaits California. And, because of other states who are likewise driven by a similar ideology, awaits America. I do wonder if the time to prevent this has passed and that all the efforts of President Trump and this administration are only delaying the inevitable.

Too bad the EPA banned Dursban and DDT.

Don’t tell anybody, but I still have about 50 pounds of Dursban in my storage shed.

Hang onto it; it may be the next form of currency, along with .22 cartridges and double-shot bottles of Jack Daniels.

I loved my (brief) internship in San Francisco. I was talking to the kids a bit ago about our next family vacation, and one of them mentioned San Fran. I told them I would love to take them, but I will not for the foreseeable future.
We have talked about going to LA for the amusement parks (but NOT Disney – I seem to have the only kids in the world NOT interested in going to Disney) but I shot that one down also.
One wants to go to SanDiego for Sea world, but I think we will spend the extra time and money to go to San Antonio instead.

Sorry California – you are not getting our tourist $$$. But then, you probably don’t want money from Christian Bitter Clinger Deplorables anyway.

The Adirondacks are beautiful this time of year.

yes. They are beautiful all year, especially this time. But being in Utah, well, the Adirondacks and the Catskills and Mammoth Caves and the Everglades are more than a week-vacation.

Fleas and rats have infested Los Angeles for some time now:

Hey, get this: Los Angeles is removing Christopher Columbus’ statue – because leftist activists are claiming he invaded the country as an illegal immmigrant – but they defend 10,000-strong mob trying to charge through our border:
https://www.lamag.com/citythinkblog/los-angeles-columbus-statue/

“As the city refined its idea, the county was developing its own backyard program, which sets aside $550,000 for residents to convert their units or secure necessary permits.”

I call them “bumgallows”. And so far, there is no interest by homeowners to take the money. This would crash home prices as the neighborhoods import all of the problems. Eventually, owners would be driven out of their homes as the city is forced to take over neighborhoods for lack of buyers.

There is also another plan to build a multi-billion dollar Taj Mahal for the homeless at a cost of $800,000 per unit.

Ahhhhh…California! Craphole of America! The best part? The Liberals LIKE life this way…and they want to export it to every other state in the union.

The homelessness problem (a product of liberals own creation) cannot be addressed through pet projects and feel good programs. Anyone with a modicum of wisdom knows that it is the homeless people themselves that must be delt with. While not all, most homeless are either mentally ill or criminals. If people insist on looking at them as victims they will never deal with the true problems.

i have an LAPD document you will find interesting, and may want to use.

Ain’t gonna get any better with Newsom as gov.